The Infinity Fabric interconnect, used in the game-centric AMD RX Vega design, has been optimised specifically for server usage. That’s a bit of a bummer for a gaming-focused graphics card, but Raja Koduri is promising consumer-optimised versions of it in the future. Does that mean lower-spec, better-value Vega, or a multi-GPU monster on the horizon?

GPUs need great screens to really show off their wares. Check out our pick of the best gaming monitors on display (geddit?) right now.

AMD’s head honcho of graphics has been defending the latest Radeon GPU release on Twitter amidst ongoing RX Vega performance and pricing problems. He’s been on a bit of a busman’s holiday recently – touring AMD’s Hyderabad and Bangalore sites – and has stayed clear of social media during the Vega fallout.

But he’s back and urging people to look at the architecture as a whole, and not just the individual graphics cards. It’s a fair point… in a way. There’s a lot of folk purely calling the Vega architecture a high-frequency-optimised update of the old Fiji design, but from what I’ve seen and read about the new setup, the Vega architecture does seem like an impressive graphical creation. 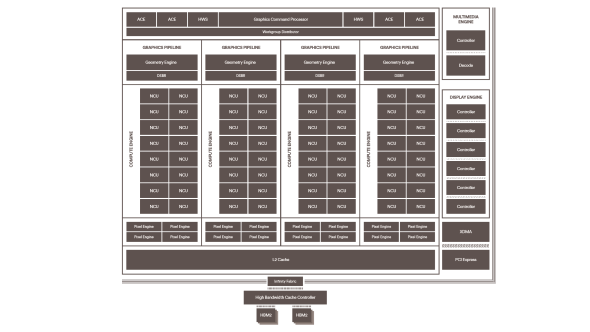 The counterpoint is that the RX Vega 64 was meant to be AMD’s entry into an enthusiast GPU space they’ve been out of for a while, and it struggles up against an older, smaller, more efficient Nvidia architecture that’s getting on for two years old now. The RX cards were the gaming cards so they should have optimised gaming performance.

Infinity fabric on Vega is optimized for server. It's a very scalable fabric and you will see consumer optimized versions of it in future.

But Koduri is saying the interconnect used inside the GPU, to connect the graphics cores to the rest of the modular componentry, hasn’t been optimised for use outside of the server market. His tantalising comment about ‘consumer optimized versions in the future’ could mean a few different things.

First off, he talks about it as a scalable fabric, so that could well point to AMD’s plans for smaller-scale versions of the Vega GPU to fill out the architectural family of cards below the RX Vega 64 and RX Vega 56. The Infinity Fabric, however, isn’t what I see as the big problem for cutting down the Vega architecture – that’s surely about extricating it from the yoke of the HBM2 frame buffer. The difficulty there is part of the ‘fine wine’ GPU performance improvements down the line could come from the use of Vega’s high-bandwidth cache controller which seems inextricably linked to the high-bandwidth memory.

One of the other possibilities is that Koduri is talking about a monster of a Vega GPU appearing in the future, using the scalability of the Infinity Fabric interconnect in the opposite way, to make a massive chip linking even more Vega cores together in one enormous package.

Now, that really would be ultra-enthusiast class gaming.