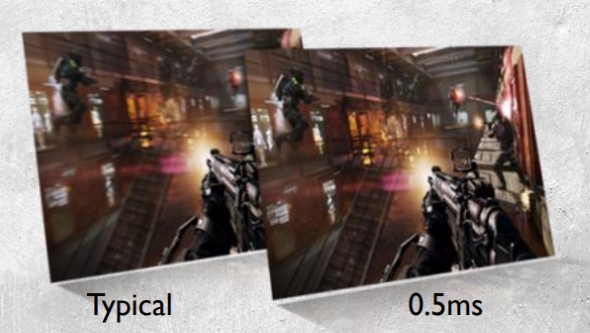 Yes, you read that right, AOC are halving the response time of today’s fastest gaming monitors with an AMD FreeSync 2 HDR panel capable of delivering 0.5ms timing. This is going to make those 5ms IPS look even more pedestrian now.

But what’s the best screen for gaming right now? Check out our pick of the best gaming monitors.

The new range of AOC AGON3 monitors are going to deliver the highest spec monitors they’ve ever created, with the Nvidia G-Sync HDR-powered AG273UG, a 4K 144Hz IPS panel, with a quantum dot filter and a 1,000cd/m2 peak luminance sitting at the top of their new stack. But, before that happens, AOC will have their super-fast AMD FreeSync 2 AG273QCX already on the e-shelves.

That’s a 1440p curved screen, with a 144Hz refresh rate, a wide colour gamut (to give it that HDR goodness) and a response time that begs the question, are we entering the nanosecond age of monitor specs? The answer is obviously no – there’s no marketing person in the world that would want to put 500,000ns on their monitor spec sheet…

“We were talking with AUO and they have a new panel,” AOC’s Alfonso Clemente explains. “Up until now curved monitors were either IPS or VA, which is ok, but the response time was not so great. There’s always some ghosting, some blurring. But now there are curved panels from AU Optronics that allow 0.5ms response time.”

There’s one glaring omission from the screen details above, and that’s the screen type they are using. The astute among you will have already realised that there’s not a popsicle’s chance in hell this is going to be a VA or IPS panel with response times that low – it has to be a TN. Urgh. 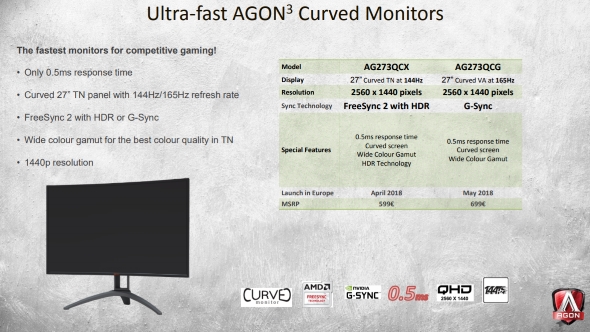 Except, apparently, not. Urgh.

“I saw this TN panel, they were doing a demonstration in Taipei,” Clemente says, “and the picture quality is probably better than IPS. It’s not quantum dot, you can’t put that on TN, but the quality was really reminiscent of quantum dot. The market has never seen a TN panel with this colour quality. Viewing angles are TN viewing angles, but you don’t care about that.”

If they’re going to be able to qualify the AG273QCX as a HDR screen, then it absolutely has to be the most colourful TN panel ever, and that’s pretty exciting. It’s not going to have the same eye-searing luminance as its G-Sync HDR cousin, but FreeSync 2’s demands are much more relaxed than Nvidia’s.

Nvidia have essentially taken the Ultra HD Premium standard, where 1,000cd/m2 is a minimum requirement, and applied it to their own gaming spec. AMD aren’t so aggressive. That means this AU Optronics panel, with a 400cd/m2 peak luminance can still count as a HDR display.

And, as AMD are wont to do, FreeSync 2 monitors are going to be much more affordable than their G-Sync HDR rivals… hell, they’re more affordable than standard G-Sync. This exciting AOC screen will go on sale for €599 in April next year, with a similarly specced G-Sync (non-HDR) version, called the AG273QCG, costing €699.

If you’re talking about the delayed, next-gen G-Sync HDR gaming monitors, then you’re going to probably need to add a one to the front of those prices…