Half the CPU overclocking world records on HWBOT are now owned by AMD’s latest Ryzen chip, the $2,000 Ryzen Threadripper 3970X. Given that it’s a 32 core processor with 64 threads that maybe isn’t a huge surprise, but having AMD dominating the entire CPU overclocking scene maybe is.

Even in recent processor history, despite the impressive performance of successive generations of AMD’s Zen CPU architecture, its Ryzen processors have never really been what you’d classically call overclocking heavyweights. They’re generally the best CPUs for gaming, but not necessarily for clock-tweaking shenanigans. That’s at the base level where we know how to overclock, but at the extreme edge of overclocking, in the land of LN2 and liquid helium, the world records table has been painted red.

The 3970X holds four of the eight overclocking world records, with Intel’s Core i9 9900KF holding onto the single core crown and the SuperPi record, and the 64-core EPYC 7742 ruling HWBOT’s own x265 4K benchmark. The final world record, the biggy, the highest clockspeed of any processor around… well, that’s been in the hands of the same chip since 2014. An AMD FX-8370. A frickin’ Piledriver CPU, no less.

Over the weekend a South Korean overclocker, safedisk, tweaked the nuts off their Threadripper 3970X chip and ripped through the CPU overclocking world records, individually nailing four in one day. Using lashings of liquid nitrogen safedisk pushed the chip up to between 5.5GHz and 5.7GHz in order to top the rankings in the four overclocking benchmarks, that’s up to 2GHz over its base clock speed. 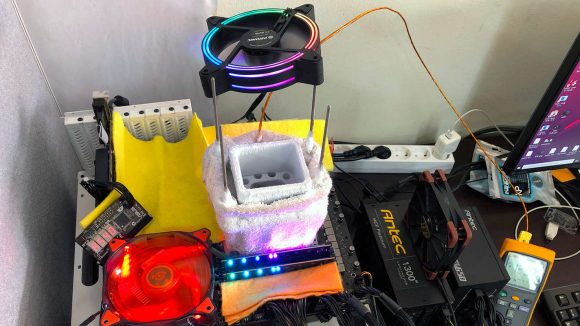 The AMD 3970X is a 32-core CPU, with a base clock of 3.7GHz and a maximum boost of 4.5GHz. To get it to that level with all 32 Zen 2 cores is hugely impressive, but it’s not enough to be able to garner the top frequency ranking.

That the same Piledriver FX chip has been holding onto the top spot with an 8.72GHz clock speed says as much for the development of CPUs as it does about overclocking performance. The frequency levels of our chips haven’t changed a huge amount in the intervening five years, with the FX 8370 offering a 4.3GHz max boost on its nominal eight-core design. That’s pretty standard even today.

Instead our chips are going ever wider… as evidenced by the 32-core chip dominating today’s world records and the fact we’ve got a 16-core CPU available to a mainstream desktop platform for less than $800.