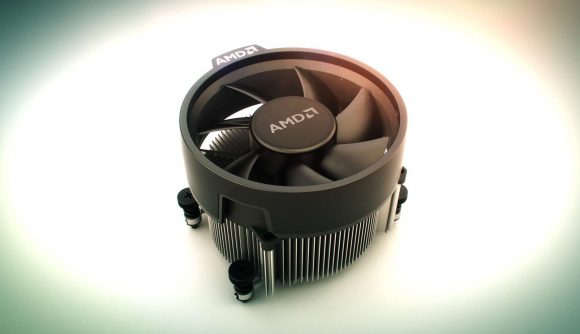 One enterprising ‘modder’ has managed to squeeze all-in-one liquid CPU cooling performance out of the Wraith Spire stock cooler for their AMD Ryzen 7 1700 processor, cutting the peak temps by well over 20°C. How have they done this? By jury rigging a $20 fan attached to the standard heat sink.

The fan in question is a simple 92mm case fan, but one that’s capable of shifting more than double the cubic feet per minute (CFM) of the original fan. It’s a standard PWM fan too, so you get all the easy fan control that you would normally get with the Wraith Spire, except with much better cooling.

The only real problem is that it can get rather chatty when you’re running at maximum loads, and I’m not 100% confident that just attaching fan to cooler with a single screw in one corner is an installation procedure that will be without future issues. The chances of that staying completely in place for the duration is pretty unlikely; it’ll be fine for a short while, like weighting it down with a brick would be fine, but I’d still recommend finding a more permanent fixing method.

Anyways, the AMD-er posted about their mod on Newegg (via Reddit) as a review for the 92mm Delta fan. As a result of changing the fan on their CPU cooler, the Ryzen 7 1700 chip they’ve been running is now comfortably clocked at 4GHz.

Wet work: These are the best liquid CPU coolers around

It’s worth remembering that overclocking Ryzen, especially first-gen Ryzen CPUs can be tricky; indeed the original Spire cooler was running at max performance just trying to keep the 1700 running at just its 3.6GHz stock speed. And even then it was hitting 89°C.

We had a go ourselves, using the bigger-is-always-better mantra, but I’m not convinced that’s necessarily the case here. It’s fine on an open test bench, and keeps the motherboard cool, but in a tight PC case the smaller fan is probably a better bet… 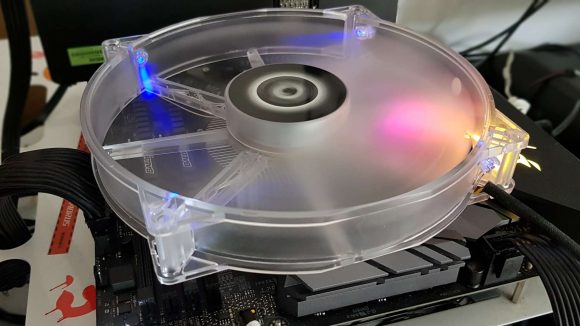 With that 92mm Delta fan in place, however, the 4GHz overclocked chip doesn’t go past 69°C even when it’s being thrashed with IntelBurnTest for an hour. In general usage the temps are more around the low 40°C mark.

All sounds rather good, right? Well, there are potential issues. “It can get around 55-60 decibels at peak,” says the review, “when running very rare extreme synthetic load tests like IntelBurnTest.”

That’s loud, like dishwasher or air conditioner loud. You’re not really going to want that to be roaring away inside your rig unless you’ve got some really good closed-back, noise-cancelling headphones. But that peak level is only during synthetic tests, pushing the processor to its limits. “With the real world normal and heavy loads like gaming and video encoding, it is in the 2,000RPM range, which was actually less than the Spire Wraith’s stock fan and practically inaudible.” 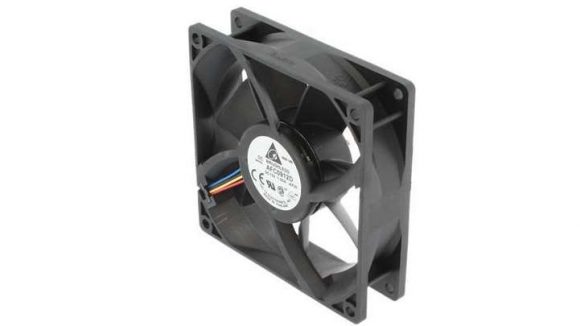 The 92mm Delta fan is capable of an incredible 4,800RPM and can shift 102.59CFM. Compare that with the standard Cooler Master fan on top of the Spire and you’re looking at a similar 92mm fan with a peak rating of 2,600RPM and 49.7CFM as a maximum.

What’s more, because the jury rigged fan has been designed for server chassis and the like, it is using industrial parts with a serious lifespan. We’re talking 70,000 hours of use – or 16 years at 12 hours per day. Connected properly this modded cooler could be a keeper.

Though maybe AMD has something even more special up its sleeve for the new stock coolers attached to the Ryzen 3000 range of processors from AMD’s Zen 2 generation… we ought to find out soon.