New mainstream AMD Navi graphics cards are on their way… because of course they are. But will they be released under the RX 5600 name or RX 670 branding? We’ve had the Radeon RX 5700 XT and RX 5700 GPUs launched in reference AMD trim, and the AIB versions from the likes of Sapphire, MSI, and Asus are on their way soon, which surely means the mainstream Radeons can’t be far behind.

We’ve been hearing increasingly loud noises about new Navi 14 GPUs and RX 600-series graphics cards, with the later Navi silicon being enabled in recent Linux patches by AMD itself. And now AMD has (quietly) announced new RX 600 GPUs too. Though, before you get too excited, the latest RX 600-series cards are maybe not what you’re hoping for…

Yes, AMD is rebadging again. This is last generation graphics silicon re-named for a new generation of OEM products and not as a fresh lineup of 7nm Navi-based goodness. Sorry. But there are still reasons to be positive; the rebadging is only going on for the old-school RX 550X and below, which means the land between them and the RX 5700 is still fertile ground for mainstream Navi graphics cards.

As Techspot says, this isn’t simply a case of AMD trying to pull a fast one, offering more modern naming schemes on older hardware as an attempt to dupe the unsuspecting public. This is rather AMD’s OEM partners requesting new names so they can use the same old graphics hardware in new laptop and desktop releases and still have them seem like up-to-date 2019 products.

The interesting part of this is the fact that the rebadging stops at the RX 550X level, leaving the $100 – $200 mainstream Radeon market open for new GPUs. And those new GPUs could well feature the Navi 14 spotted again in Linux patches and more recently in the Compubench database.

Serial Tweeter, Komachi, posted the link to the AMD 7341:00 entry, which is the PCI ID previously touted as being used for Navi 14. The 00 suffix is posited as referring to either Apple or server-based cards, not as a general Radeon release, but given that the Compubench tests were run on Windows that looks to rule out an iMac part. 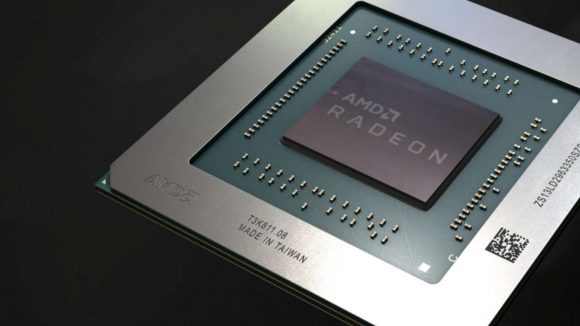 The Navi 14 chip in question is a 24 compute unit GPU, with 1,536 RDNA cores at its heart and a reported max clock speed of 1,900MHz. Whether that’s the peak engine / boost clock, or the game clock, we’re not sure. But it’s an 8GB card, so it looks like it will be a pretty beefy mainstream offering, and quite possibly the new RX 570 replacement.

But will it be an RX 5600-series or RX 670-series card? Given that AMD decided to make the last-minute switch from RX 690 to RX 5700X for the inaugural Navi GPUs I would be willing to bet that any mainstream versions would get the four-figure nomenclature instead. After all, Scott Herkelman promised consistent naming for all of its graphics cards for the next five to ten years after the switch to the RX 5700-series happened.

He just wasn’t talking about OEM refreshes, those can simply remain confusing, obvs.

Join the conversation and let us know what you think on this article’s Facebook and Twitter feeds.