AMD is back to its dual-GPU shenanigans. Now don’t get your hopes up, it hasn’t announced the spiritual successor to the Radeon R9 295X2, but the red team is finally following up the professional workstation Radeon Pro Duo with an equally over-the-top dual-GPU graphics card: the AMD Radeon Pro Vega II GPU.

Built upon the 7nm process node, the Pro Vega II Duo is offering up to 28.3 TFLOPs of FP32 performance from dual Radeon Pro Vega II GPUs. These are connected via the red team’s interconnect technology, Infinity Fabric, allowing for greater throughput between the twin GPUs than possible via PCIe 3.0 – five times faster, in fact. That’s the same interconnect technology the red team is rolling out with Zen 2 and its Ryzen 3000 CPUs, and an instrumental tool in tying together 7nm processor CCX chiplets and 14nm I/O chiplets.

To keep those two rather hungry GPUs fed with data requires a substantial pool of memory. Not to worry, the Pro Vega II is complemented by 32GBs of HBM2 memory, capable of 1TB/s memory bandwidth. That’s 64GBs total for the Duo card.

Sound expensive? You betcha. The Radeon Pro Vega II will be solely available inside Apple’s just announced Mac Pro system. While the company failed to mention the price of its top-end model, we suspect this system – packed with two Radeon Pro Vega II graphics cards (count: four GPUs) – will land with a price tag upwards of $30,000. Even the entry spec Radeon Pro 580X model will set you back $6,000.

Graphical might: These are the best graphics cards in 2019

And while it’s great to see AMD back to its dual-wielding ways, the Pro Vega II is still a ways off dual-GPU gaming cards. 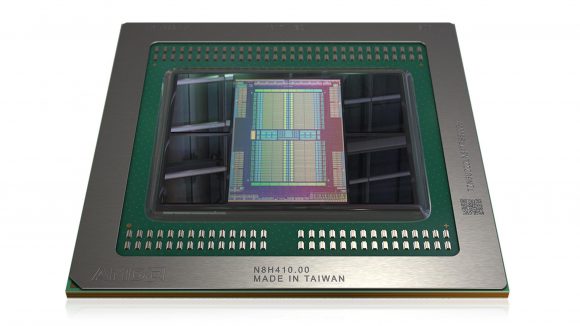 That’s because the issue for us gamers is a little more complex. Computational tasks are an apt fit for multi-GPU systems, however, rendering a frame between multiple chunks of silicon requires an invisible bridge across the hardware and the software on the system.

“To some extent you’re talking about doing CrossFire on a single package,” says Wang to PCGamesN last year. “The challenge is that unless we make it invisible to the ISVs [independent software vendors] you’re going to see the same sort of reluctance. 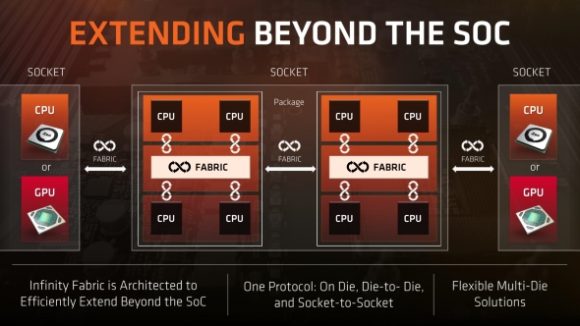 That exists to some extent with AMD CrossFire and Nvidia’s SLI technology. However, neither has found a sturdy foothold in the industry, or wholehearted game support to make all that extra GPU silicon worthwhile is hard to come by.

But that doesn’t mean there’s not some hope for AMD’s Infinity Fabric achieving this for us gamers in the future.

“Anything is possible,” Wang told us.

And Google, in partnership with AMD, has also managed to achieve a somewhat seamless (or so it claims) implementation of multi-GPU instances within its Google Stadia infrastructure. So there’s some precedent for multi-GPU gaming in the modern age even as old-school solution support wanes.

And until that day we still have AMD Navi RX 5000-series graphics cards to look forward to. These are expected to launch sometime in July, and AMD will go into more depth about the RDNA architecture powering these graphics cards during its Next Horizon gaming event over at E3 on June 11.