While AMD has shown that Ryzen 3000 memory overclocking can push above the 5,000MHz mark on the MSI X570 Godlike, and hit 4,200MHz simply using XMP settings on other board, the real gaming sweet spot for performance memory is going to be 3,733MHz. And that’s all because of the Infinity Fabric.

Memory performance on AMD’s Ryzen platform has been a hot topic since the first generation of chips launched back in 2017. AMD itself admits that memory compatibility was something it struggled with for the first generation processors, but that’s not going to be the case with Ryzen 3000. “It’s just a different product, compatibility is so much better,” AMD’s Travis Kirsch told us this week.

But while compatibility and high-end performance have hugely increased with this new generation of Ryzen CPUs, and with the X570 platform, just having the absolute fastest memory isn’t necessarily going to give you the best actual experience. The raw memory latency is also important and there’s a switching point in the Ryzen 3000 make up that hikes the latency when you go above a certain frequency.

At a recent Ryzen 3000 event Travis Kirsch explained to us the differences with the memory performance of the new generation of processors versus the previous memory starved first gen chips.

Read more: These are the best gaming headsets around today

“When you look at memory overclocking,” he says, “MSI Godlike has already demonstrated over 5,000MHz on air. So if you compare that back to first- and second-gen Ryzen, it’s just a huge difference. It’s going to be a lot of fun tweaking the platform and pushing the memory speeds up.”

While that’s great for the number-crunchers looking to nail the absolute highest frequencies they can squeeze out of their memory, that’s not where you’re going to want to pitch your Ryzen 3000 rig when you get it home. Part of the problem with the memory performance on the previous generations of Ryzen is because the platform’s Infinity Fabric interconnect is directly tied into the speed of the memory on a 1:1 level. 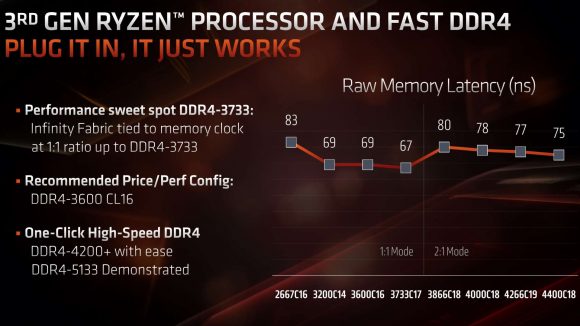 “We’ve demonstrated in-house that with one click, using XMP settings, 4,200MHz runs pretty easily,” explains Kirsch. “But we did have to do something to do that. In the first two gens of Ryzen the Infinity Fabric was tied to the speed of the memory through the entire spectrum.

“We’ve actually created a way of decoupling those two, so that you don’t have to have your memory for your Infinity Fabric tied to your memory speed. That’s important because the Infinity Fabric is tied to the GMI [global memory interconnect] link which talks from the controller, to the chiplets, and that link has got limitations… you can only go so fast.

“The max speed we’ve gotten it stably is about 1,800MHz, a little bit over 1,800MHz. It’s tied two-to-one to the memory clock, so that’s why 3,733MHz is the max frequency that you can get in that link. Once you go beyond that our software decouples them so that that GMI link won’t crash.” 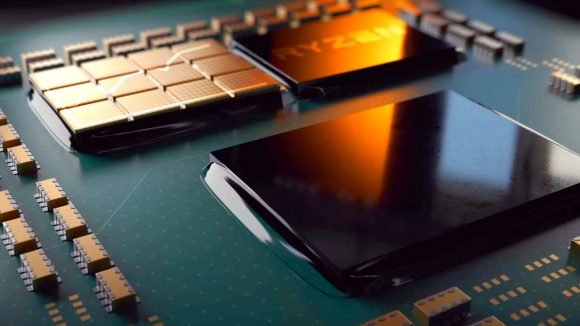 That means there’s a hard switch during memory overclocking, so once the software stack see it hit that 3,733MHz mark it then decouples the Infinity Fabric and the actual memory latency drops quite considerably.

“If you’re looking to optimize your latency,” says Kirsch, “you want that GMI link talking as fast as it can, because you’re moving from the CPU core, outside your memory controller, and you gotta cross that link.

“So the lowest memory latencies you’re going to get, in the reasonable memory overclock world, is 3,733MHz. When you guys test it, we recommend using the 3,600MHz, with CL 16 or lower – if you can get it lower than that stable it’s great – because that’s going to give you the optimal memory latency. It’s also going to give you a very good price performance module. But with that said, if you’re an enthusiast and you want your high clock speeds, we do allow a path for that”

But you’re just going to have to sacrifice your raw memory latency to get those spectacular 5GHz+ numbers.