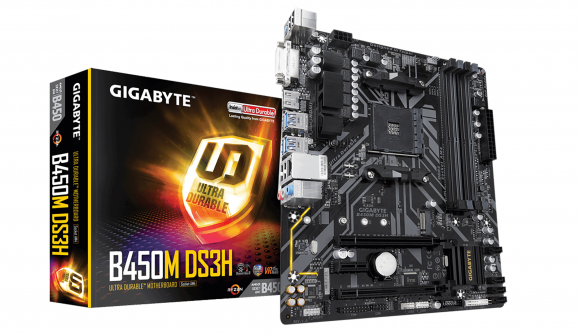 May 20, 2020 AMD has now announced that B450 and X470 chipsets WILL support AMD Ryzen 4000 processors. The story below is now incorrect given this new information.

AMD X470 boards and more budget-friendly AMD B450 boards are probably sitting in many gaming setups right now. B450 motherboards, in particular, are a popular choice for mid-range gaming PC setups. But those of you using these chipsets might be disappointed to hear that they won’t natively support AMD Zen 3 CPUs.

A slide from AMD’s pre-Ryzen 3 launch briefing (via VideoCardz) confirmed that only X570 and B550 chipsets will support 4th gen Ryzen CPUs, while X470 and B450 chipsets will not.

AMD Ryzen 4000 CPUs should use the same AM4 socket as their predecessors, meaning for the longest time people have assumed their B450 and X470 motherboards would be safe in terms of compatibility for the next generation of Ryzen CPUs – no iterative socket changes like over in the land of Intel. But now it’s been confirmed that they will not. However, while this could mean that Ryzen 4000 BIOS support will not be there full-stop, it could also just mean that it cannot be guaranteed across the board.

Many people expected across the board native support for next-gen Ryzen processors on the B450 and X470 platform. And while backwards compatibility is never guaranteed even with the same socket, AMD’s processors and chipsets have a reputation for being more forwards- and backwards-compatible than Intel’s.

This backwards compatibility has now seemingly come to an end, but all is not lost. The AMD B550 chipset is expected to debut next month and should bring a great budget option to the table in time for AMD Ryzen 4000 CPUs. It will also boast PCIe 4.0, just like the more expensive X570, giving increased bandwidth for both storage and GPUs. Great stuff.

The VideoCardz article referenced above also mentions that AMD B550 boards will also have dual-GPU support, which was only previously reserved for the more expensive X470 or X570 boards. In other words, then, it looks like AMD is still making lots of moves in the budget-friendly market, especially considering this alongside its recently released Ryzen 3 3100 and Ryzen 3 3300X CPUs.

There are already plenty of budget AMD options for your average PC gamer, then, and the B550 board should keep this cheap and cheerful streak running into the next generation of Ryzen processors for those starting new builds. It’s just a shame that those with existing B450 and X470 builds won’t have that same luxury.