A new slide has appeared online showing the end of socket compatibility for AMD’s EPYC processors coming with 2020’s Zen 3 architecture. That, by extension, would also suggest the end for the AM4 Ryzen CPU socket too. AMD has been long committed to retaining socket compatibility for its processors going up to 2020, and now it looks like it’s going to come to a hard stop with a fresh CPU design for Zen 4.

Back in September AMD presented at the HPC-AI Advisory Council conference, and for some reason we couldn’t get there. I think Jacob was washing a hare or something. But, at the event, AMD divulged a few fresh details about its Zen 3 architecture, and intimated the potential changes on the way for the next generation of processor design.

The current EPYC server chips, codenamed Rome, are built on the same Zen 2 design as the Ryzen 3000 desktop processors we love so well. But time she waits for no man, and the Zen 3 Milan CPUs have already taped out. And, if this roadmap’s timeline is accurate, then it wouldn’t be a surprise if some Zen 3 engineering samples were even lurking around right now.

But, as the 7nm+ Zen 3 architecture is more of an update to the current Zen 2 design than a full redesign, the roadmap – screenshotted from a hastily removed YouTube video by Tom’s Hardware – shows the Milan chips still happily using the same SP3 server socket as the current Rome server processors. The same will surely follow for both the TR4 socket for fourth gen Threadripper parts and Ryzen 4000 CPUs with their AM4 sockets. 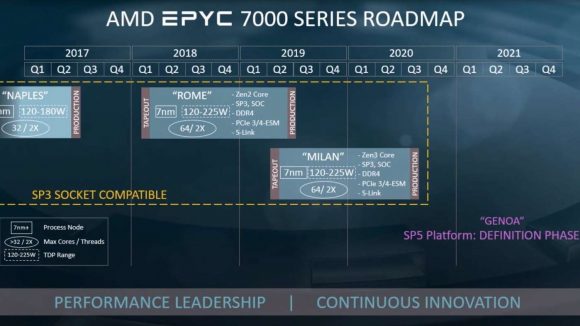 The basic design of the 7nm+ EPYC chip looks to be largely unchanged, with the same chiplet and I/O die layout following on from the current Zen 2 setup. The only thing that looks to be changing with Zen 3 so far is that each of its chiplets can contain 32MB of unified L3 cache as opposed to the current 16MB L3 apportioned to each four-core complex.

There will be a pretty standard 10% performance boost on offer just from the use of TSMC’s more advanced N7+ node alone, which will also be the first to offer some form of extreme ultraviolet lithography in manufacturing. It will only be used sparingly with this process, as the N5, or 5nm, node likely to be the first full EUV process from TSMC.

EUV should eventually have the combined benefits of both shortening production time as well as making things a little cheaper, as it will reduce the necessary number of masks and processes needed to pattern silicon right now. 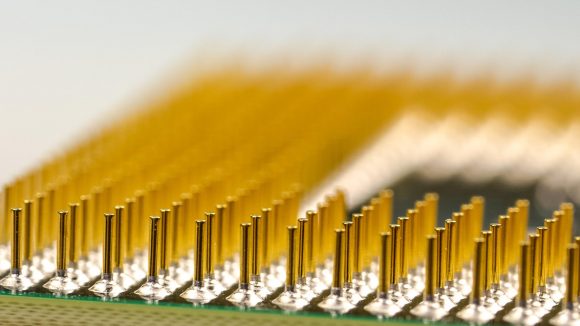 The following Genoa EPYC processors – presumably using the Zen 4 architecture, which is currently noted as being ‘In Design’ – is shown as existing outside SP3 socket compatibility with support seemingly ended with Milan on its release in Q3 next year. Genoa is then set to operate on the SP5 platform which is currently in the ‘definition phase.’

I expect that if the Zen 4 server chips require a whole new platform and socket then the desktop processors, whether 4th Gen Threadripper or Ryzen 4000 CPU, will also need a new home for themselves too. A TR5 and AM5 socket would then seem plausible.

It is possible that the EPYC server parts might require a new platform simply to ensure compatibility with newer DDR5 and PCIe 5.0 standards, but it seems unlikely that would 100% necessitate a whole new socket design. More likely the next real generational update for AMD’s Zen architecture will be a different beast to either Zen 2 or Zen 3 when it arrives in 2021 to justify that changed socket.