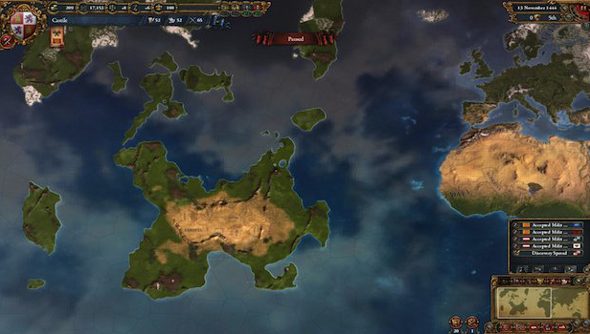 If I was in the habit of writing flowery poems, I’d write most of them about Europa Universalis IV. Its vast scope and depth coupled with a plethora of tools to craft all manner of alternate history narratives made it my favourite strategy romp this year and one of the best grand strategy titles I’ve had the good fortune to play. So obviously I’m rather looking forward to January 14, when Europa Universalis IV’s first expansion, Conquest of Paradise, drops.

Conquest of Paradise creates a randomised American continent, with new geography and a slew of new tribes to play with or fight against while expanding the native experience with brand spanking new abilities like migrating from provinces, creating confederations of tribes and working through a new advancement track, making progress hopefully less dreary.

Currently, playing in the New World as a native tribe can be rather dull. It’s slow going, as you basically wait until you can westernise and get the sorts of advancements the European nations have, but by then you’re likely dealing with western incursions by far superior forces. It’s challenging, but not particularly fun when compared to playing as an Old World power.

The new system promises to offer more unique events, advancement tracks and buildings for native tribes. On the colonial side of things, planting your flag on the new continent will be a lot tougher. It’s pretty easy to set up a vast colonial empire in the vanilla game, making nations like Castile incredibly powerful, but in Conquest of Paradise, colonists may set up free states or rebel against their western masters.

While all these new features sound spiffy, I’m most excited about the prospect of exploring a completely new landmass, filled with surprises in a region I have no knowledge of. The New World isn’t particularly new now, and we all know the score, so having this random element should hearken back to the days when America was shrouded in mystery.