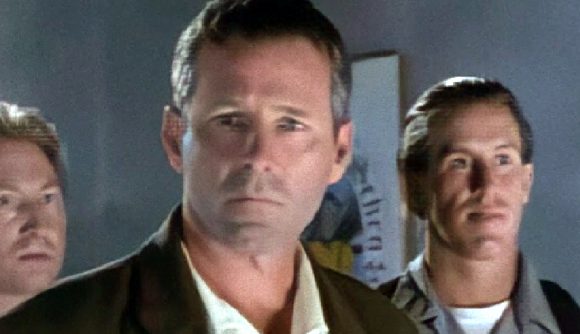 We still haven’t got Half-Life 3, but this Summer will see the release of a long-lost Atari Jaguar CD-ROM FMV game called American Hero instead, because. The game has been completely restored by publisher Ziggurat Interactive, with additional voiceover work by fantastically named star Timothy Bottoms. I swear we’re not making any of this up.

The Atari Jaguar was released in 1993 as Atari’s unsuccessful attempt to stay in the console-making business, with the most notable game on the system being the original version of Rebellion’s Alien Vs Predator – which has not been re-released. The Jaguar’s CD-ROM add-on was even more obscure, arriving just after the worldwide launch of the original PlayStation – boasting a total of 11 games, including Myst, Dragon’s Lair, and an exclusive Highlander game.

American Hero is described as “a satire of over-the-top 80’s action films which has itself aged into a caricature of 90’s cinema”, which is another way to say that Ziggurat Interactive know full well that the game’s so bad it’s hilarious – and people will want to play it for that fact alone.

All the screenshots show American Hero being played on a tiny ’90s TV set, complete with a built-in VHS player, although the trailer below zooms in to the action so presumably players can in the game too. The plot, if that’s important, involve Timothy Bottoms’ Jack trying to stop the evil Krueger (Daniel Roebuck – The Fugitive, Final Destination) and his plot to poison the Los Angeles water supply. Expect a lot of shooting, multiple women in their underwear for reasons, and zero actual gameplay.

An important part of American Hero outside of the game is preservation, something Ziggurat Interactive is wholeheartedly in favour of. “American Hero is a buried treasure from the Atari archives that was nearly lost to time after the Jaguar CD’s abrupt end,” explains Michael Devine, SVP of Business Development at Ziggurat Interactive. “To be in a position to restore and complete this game, and preserve a unique part of video game history is exactly what Ziggurat is all about.”

Last year Ziggurat published remastered versions of the first two Bloodrayne games, so it’s certainly making good on that assertion. Half-Life 3 was nearly an FMV adventure game, you know. Can we have that next?