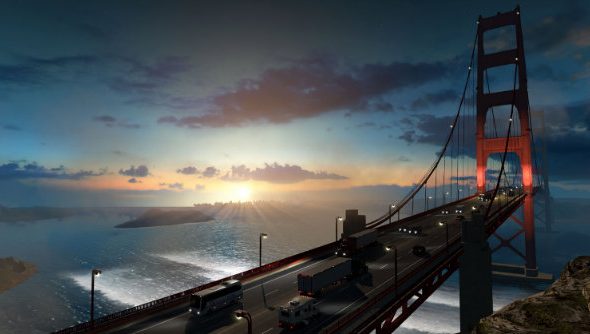 America isn’t exactly defined by its short roads, is it? That’s why it’s good that American Truck Simulator’s roads are about to get a bit closer to the vast stretches we all expected.

Sick of waiting at traffic lights? Check out our list of PC’s best racing games.

In reaction to complaints received about the size of the sim’s roads, SCS Software have begun working on a new sort of expansion.”The greatest number of complaints from the players of American Truck Simulator have been related to the scale of the map,” said SCS. “Your comments are incredibly important to us, and we listen to as many as we can.

“As such, we had been pondering internally how to meet your feedback for several months while we finished work on the Arizona DLC, and now we have made up our mind: we are, as a free future update, going to increase the scale of the game world of American Truck Simulator.”

The map was originally a scale of 1:35 and that’s going to be increased to a 1:20 scale, meaning the roads out in the wilds will be 75% longer, making the map around the same size as Euro Truck Simulator 2.

As part of the update the team will also go back retouch all the roads and intersections that exist, including creating “space for large vistas”.