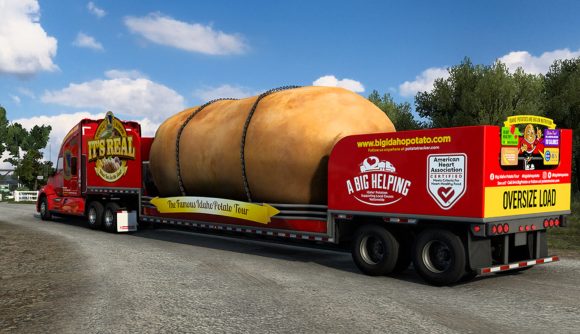 There’s nothing more American than vegetables and goofy-but-earnest roadside attractions, and the latest American Truck Simulator event is putting them both together. In celebration of the one-year anniversary of the Idaho DLC, the devs at SCS Software have a new event that’s all about hauling a giant potato across the USA.

The Big Idaho Potato is a real thing (but not a real potato) that the state-run Idaho Potato Commission constructed in 2012 as a sort of touring advertisement for the state’s famous potato industry. The original potato (again, not actually a real potato) was decommissioned and converted into an Airbnb, but the tour has returned for 2021.

In-game, this is a World of Trucks community event that challenges players to collectively deliver 200,000 loads of Idaho potatoes – either the regular or giant variety will do – before August 15. If the community meets the overall goal, everyone will get an Idaho air freshener and an Idaho Potato Sticker.

Individually, players who deliver six loads of Idaho potatoes and one giant potato will get a bowl of chips and a giant salamander sticker. You can get the full details on the official site.

Without truck games, I never would’ve learned about the Big Idaho Potato Hotel. This is truly a series of unending delights.