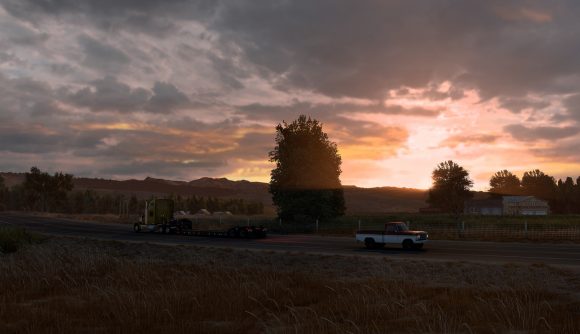 American Truck Simulator‘s long haul from west coast to east coast continues into Wyoming soon, as developer SCS Software has just confirmed the setting of the next piece of DLC. The studio has revealed a load of screenshots of the digital Cowboy State, and taken the opportunity to debut American Truck Simulator’s visual overhaul here, too.

Both of SCS’s truck sims are getting a new, more realistic lighting model with their respective 1.40 updates, and that means the studio has had to overhaul the existing visuals in order to match the new lighting. As with Euro Truck Simulator 2’s Iberia DLC, ATS’s Wyoming is the first location built from the ground up to look its best under the new lighting.

And it looks mighty nice. Wyoming is one of the least-populated states in the country, but its combination of prairies and occasional mountains makes for a gorgeous way to show off the new lighting under a beautiful sun. You can see some more of those images over on the official site.

You can also stare at the DLC while awaiting its eventual release on Steam.

For more great truck games, you can follow that link. Believe it or not, a few studios besides SCS are represented there, too.