My reputation as a successful city planner precedes me. No sooner has my cargo ship pitched up in Anno 1800’s latest region, Enbesa, than the local Emperor Ketema is asking me to build him his capital city. It’s like that bit in the Inbetweeners when Jay is scouted for England because he took Woking to the Champions League in Championship Manager, except, y’know. It’s still a videogame. I expect my call-up to the council planning office any day now.

Unfortunately, Ketema’s grand project has its dissenters, and their discontent is the reason that Land of Lions is the most story-rich of all Anno 1800’s expansions to date.

Three of Enbesa’s islands are occupied by local factions that resent Ketema’s looming yoke: the traditionalist priestesses of Kidusi Anitoni demand their faith be respected, the fiercely independent Angereb Fortress fears to lose its freedom, and the once glorious, now dilapidated oasis of Waha Desher needs to know how Ketema will help it recover. My long-term goal here is to address these grievances and unite the people under Ketema’s benevolent rule.

Anno’s gameplay doesn’t really lend itself to this kind of thing. Tasked with gaining access to the library on Kidusi, its High Priestess sets me a test to prove my worth – it feels like it wants to be a physics or logic puzzle in an action-adventure game, but the best Anno 1800 can do is ask me to scour the island for objects hinted at in a few riddles, and then click them. I do the same when asked to verify the priestesses’ supposed evidence that their anti-materialist customs are endorsed by Enbesa’s ancestors.

The highlight is the twist at the climax: turns out the holier-than-thou priestesses aren’t immune to convenient – dare I say hypocritical – reinterpretations of their principles when it suits them. It’s well-written, but in gameplay, it’s not much of an improvement on the ‘quests’ you get from residents to find and click drunk husbands or runaway children, or from Bente Jorgensen to click a bunch of animals.

It’s Where’s Wally, in essence. And though these quests are a pleasant distraction every now and then, because Anno 1800 is such a beautiful game to poke around in, a little goes a long way. Anno is a city builder, and a brilliant one, and I’d much rather get on with building cities than be nagged to click haphazardly around a screen, or ship resources from faction to faction, while being asked to believe that such busywork adequately represents a much more complicated endeavour. It just isn’t convincing, and it distracts from what Anno is really good at.

Enbesa is a love letter to Africa, and it's simply a wonderful place to be: to spend a relaxing, mindful time building something

Fortunately, there’s plenty of that too. Once you’ve clicked past the distractions, there’s more to Enbesa than either of the other sessions that Anno 1800’s DLC has added. Its most distinctive feature is its islands’ need for irrigation, inspired in part by Anno 1404’s noria water wheels according to international brand manager Marcel Hatam (though personally I’d draw comparisons with 1999’s excellent Pharaoh).

Islands in Enbesa have a fixed number of building slots on their rivers, where you can build water pumps, clay makers, or paper mills. Each water pump feeds a limited quantity of freshwater to your network of irrigation ditches, obliging you to maximise their efficiency in converting arid land to fertile soil, greatly improving any farms built upon it. It’s similar to distributing heat in the Arctic, but much more forgiving and enjoyable – seeing life-giving water surge along a canal in a white spray, lighting the gold grass green, is a delight.

Indeed, Ubisoft Mainz’s artists have once again created digital wonders in the look and feel of Enbesa. Every now and then, while you’re blueprinting your next district, you’ll spot a herd of gazelle grazing, or a flock of birds – albatross, perhaps – will drift by. When placing a lobster fishery, you’ll pause to appreciate the white sandy beaches as they’re splashed aquamarine by the sea. The golden grasslands lend the entire region a warm hue that stands in contrast to the cold Arctic. Music featuring pipes and djembe drums completes the aesthetic: Enbesa is a love letter to Africa, and it’s simply a wonderful place to be: to spend a relaxing, mindful time building something.

As young people working on the cutting edge of technology, Scholars want access to the first radio stations

There’s no need to go into the minutiae of Enbesa’s new production chains. You broadly know what to expect: new raw materials such as linseed, sanga cattle, teff, indigofera, and hibiscus are combined into new refined goods, such as mudbricks, dried meat jerky, seafood stew, clay pipes, and illuminated manuscripts. Developing and connecting multiple cities to produce all these goods is as addictive and satisfying as ever – more so, in fact, thanks to the added wrinkle of irrigation and because there’s demand for Enbesan goods in the Old World. This means Land of Lions should be far more impactful than The Passage in its effect beyond its new session.

But, you observe, we already know what our citizens in the Old World need. Surely they’re not changing those needs? No, indeed, I reply. Rather, a sixth citizen type is being added to the Old World: the Scholar. 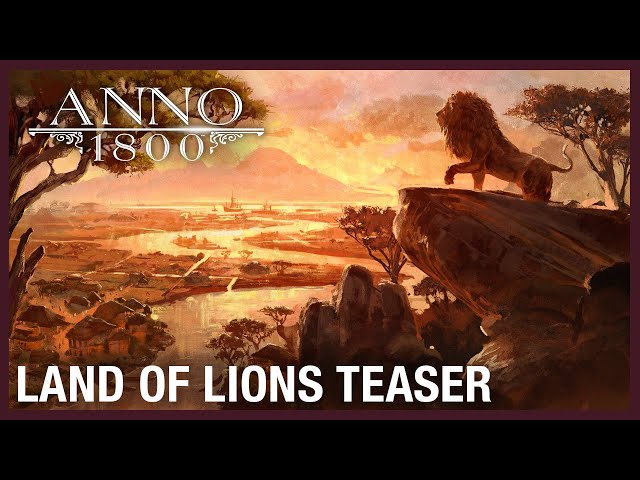 As the first new citizen tier since launch for the game’s core regions, Scholars are one of the most exciting and important additions yet made in Anno 1800 DLC. I enjoyed the threatening beauty of the Arctic and the challenge of building colonies there, but once you’ve got airships and gas exports set up, you can practically ignore the whole region. It’s an observation that’s been made widely in community feedback, Hatam says, which made clear a wish that future sessions be “more closely connected, or entwined, with the rest of the game.”

Related: Check out the best management games on PC

Scholars are the answer. Represented by a young man from Enbesa, they are highly talented students who flock from far and wide to conduct research in the Old World. Alongside their dormitories – which will be some of the densest housing in the game – Old World sessions will get ten new buildings across six new production chains to cater to their needs. And, Hatam adds, as “young people working on the cutting edge of technology, they have very modern demands. For example, they want to have access to the first radio stations.”

More exciting still is the Research Institute – the game’s third monument after the World Fair and airship hangar. After three lengthy construction steps you can spend research points, accumulated by your Scholars, to unlock special items. This is a direct way to access the sort of loot you’d normally bring back from expeditions and so forth, which until now – in another point of addressing player feedback – had been too reliant on RNG. If I can complete the Arctic collection in my zoo by simply picking a moose from a menu, I’ll be delighted. But you’ll also be able to spend research points on ‘major discoveries’ with huge game-changing effects, such as adding a new type of crop fertility to your island.

And the base game? Check out our Anno 1800 review

Enbesa is a gorgeous environment, but Scholars and the Research Institute strike me as the most exciting features of the Land of Lions DLC. Which is why I’m sad that my four hours of hands-on time wasn’t enough to really get to grips with either of them.

It’s been a reminder, though, that Anno 1800 is at its best when it plays to its strengths. This is one of the most beautiful and richly realised city builders on the market, and Land of Lions complements this with another lovely region in which to do that, but which promises to interact with the core game in thoughtful, exciting ways. As it’s looking like it’ll be the game’s final DLC, Land of Lions seems poised to be a splendid, fittingly sepia-tinged send-off.