Sat in Ubisoft’s studio in Mainz, Germany, I am inching a coal-fired heater along a path cut in waist-deep snow. The path lights up to indicate the heater’s area of effect, and I am carefully optimising it against a number of factors, such as the influence of other heaters and the fact that I likely don’t have enough trees for another one. I am having enormous fun.

Given that Anno 1800 is a Victorian-esque city builder which, with The Passage DLC, now has an arctic environment in which you have to keep your people warm, you’ll forgive me for getting some Frostpunk vibes. That’s no bad thing, of course, given that Frostpunk is also brilliant, but as community developer Bastian Thun observes, Anno’s new survival mechanics are far lighter (and, with Anno 2205, the series had a similar heat mechanic first).

There’s certainly a lot to juggle. Islands out here are tiny, so space is at a premium at the best of times, but the need to place so many heaters to keep your people warm means you need a lot of charcoal kilns, which in turn require a lot of forest to function, so what space you have is further squeezed. 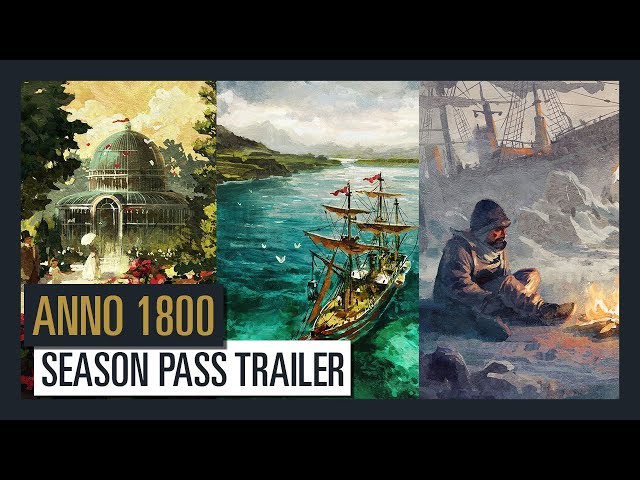 That’s the main issue, but then there’s arctic flu, the bane of my session. Gameplay designer Andrea Fricke confirms that it’s “more contagious” than diseases back in the Old World, and requires more Ranger Stations – which serve as both fire service and hospital, here in the arctic – to contain. Given that Ranger Stations need steel, which cannot be locally sourced, I lose many brave explorers while waiting for my first shipments.

Explorers are the first of the two new citizen tiers (technicians are the second). They’re hardy folk, who’ll say things like “no one said it would be easy” through chattering teeth. It’s a refreshing change from the ‘ooh, woe is me’ mewling of the soft-bellied artisans, or the gammon-charged harrumphing of investors, back in the Old World. I respect explorers and I’m going to do my damndest to support them out here. 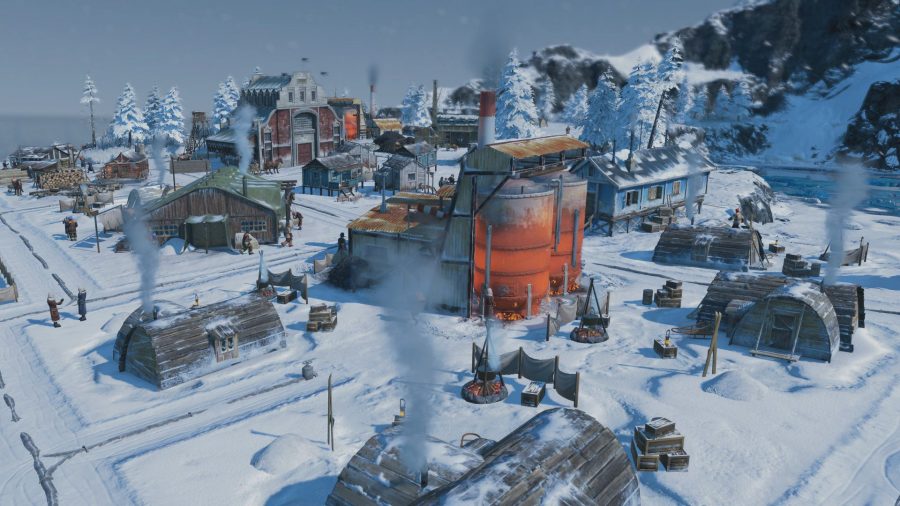 All of this said, the simplicity of the arctic economy makes things a little more forgiving when an entire neighbourhood is lost to disease than it would back in the Old World. The ripple effect on my other industries is necessarily more limited as there are fewer of them and supply chains are pretty simple: after heat, explorers’ next need is food based on caribou and whale oil, then sleeping bags made from imported cotton and locally farmed goose feathers.

When I do get these industries up and running, I see my labour surplus boom as contented explorers move in to fill existing housing. It’s satisfying in the same ways as the base game, especially given the hostility of the environment, which is enhanced by some more truly lovely audiovisual work. The palpable courage of the engineers is set against a delicate violin soundtrack that somehow manages to be both mournful and inspirational.

Snow falls thickly, wind howls, and ice abounds in ways that I wish it still did in our own arctic – both peppered about in small icebergs and concentrated in great edifices that soar from the frigid sea. When the sun goes down, the blinking oil lamps of my little outpost seem vulnerable in the surrounding darkness, in contrast to my metropolis in the Old World. It’s beautiful, albeit in a menacing ‘I’m nature, don’t try to tame me’ kind of way, and utterly unlike the other biomes. It may be my favourite. 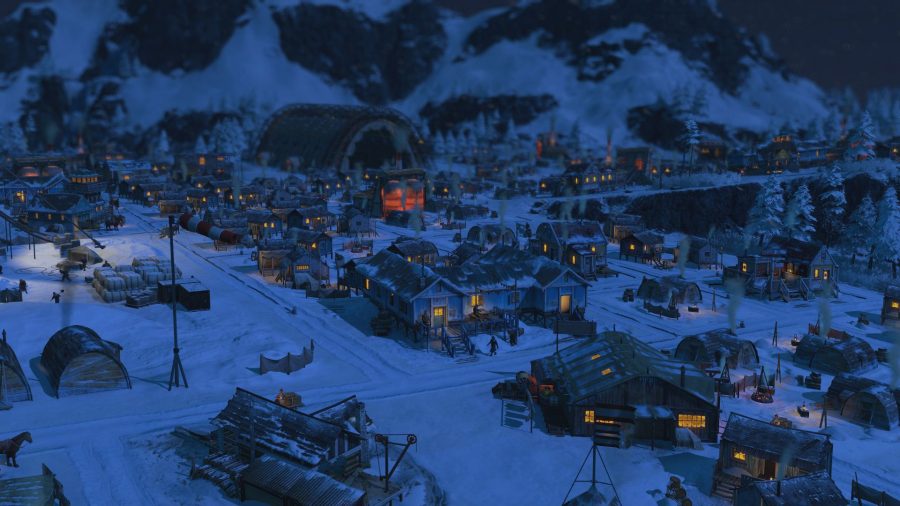 The quest that takes you to the arctic unlocks when your first engineers move in – relatively late in the game. In a story inspired by that of Sir John Franklin’s attempt to force the Northwest Passage with HMS Terror, the wife of a lost explorer – also called Sir John – asks you to help find him. As with the trip to the New World it takes the form of an expedition, which hammers home these themes of adversity. Anno’s utterly lovely artwork now shows icebound ships with icicles in the rigging, the branching decisions are about blasting yourself free of freezing waters, and Sir John’s journal entries perfectly capture the spirit of a foolhardy Victorian explorer.

A new biome is all very well – especially when it’s as cool as this – but as much as I appreciated the logistical challenges of producing and shipping materials home from the New World, it was always a sideshow. The Old World, where your home island is, is the main attraction, and without its citizens demanding goods from the Arctic as they do from the New World, what is there to bring from the North Pole to the rest of your game? 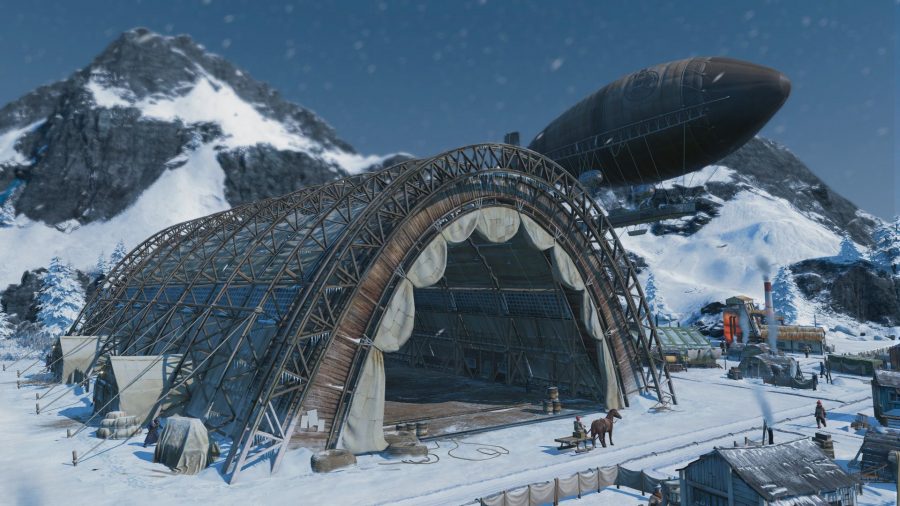 One word: airships. These new vehicles are a key feature in the story of The Passage, and they bring major benefits to your empire. My hands-on time finishes before I’ve completed construction of the airship hangar, a new four-stage monument that’ll grant access to these machines, but I get a few details from Thun and Frecke before I leave.

Most obviously, airships are the best cargo haulers in the game. Though their capacity is only four slots compared to the cargo ship’s six, they are faster, and can fly over islands, enabling them to take a more direct route between destinations. “Their tonnage-per-minute ratio is better”, Fricke confirms. And because they can fly, they also can’t be targeted by pirates.

Beyond this, though, airships are also the only means of accessing one of The Passage’s most important new resources: gas. I kinda like the challenge of planning ahead to my oil delivery railways (I map them out with dirt paths), but if you don’t, gas is your answer. Gas power plants unlock with investors, and no longer need railways – carts will drop the gas canisters off from a warehouse like any other commodity. 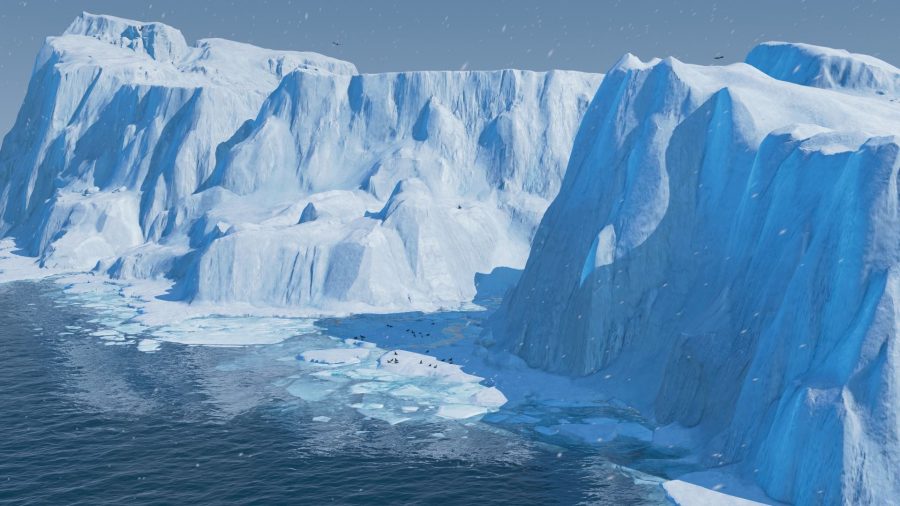 But you need airships to get at the gas deposits in the Arctic, which can only be found atop frozen cliffs. That, plus more efficient gold mines and the haulage abilities of airships themselves, should be sufficient incentive to get involved in the Arctic and bring lasting benefits to your empire beyond the recovery of a lost expedition.

I only played about six hours of The Passage but I can’t wait to get my hands on it again. On a pretty lengthy first impression, this looks to be another thoroughly worthwhile piece of DLC that adds a meaningful new experience to the base game without undermining it. I was told at Mainz that Anno 1800 will continue to be expanded with more content in 2020, and if Blue Byte can maintain the standard of its first season pass, that’s welcome news.