There are islands to colonise and trade ventures to embark upon, but also real — frequently opinionated — people chatting away, micro-transactions and timers. It’s a title that Ubisoft are undoubtedly hoping will appeal to two disparate groups: the facebook/farmville crowd and hardcore strategy gamers. Perhaps that’s too tall an order.

I arrive at my new island — my home away from home — with nothing but a smile and good intentions. It’s not an unappealing little island, especially once people arrive and start sauntering through the streets, going about their daily lives. It’s more like 1503 than it is the recent Anno titles, but it’s less of an eyesore than some of its browser-based contemporaries. Similar compliments cannot be paid to the music, unfortunately, with the same inane tune constantly playing, slowly driving me to madness.

I’m to tame the untamable wilderness in the name of the Empire and build a vast economic powerhouse across an uninhabited archipelago. “No big deal”, I say to myself. This isn’t my first rodeo, and at its core Anno Online shares the same principles as previous Anno titles: one must maintain an economically stable settlement, exploit natural resources, manufacture goods and keep the citizens content. 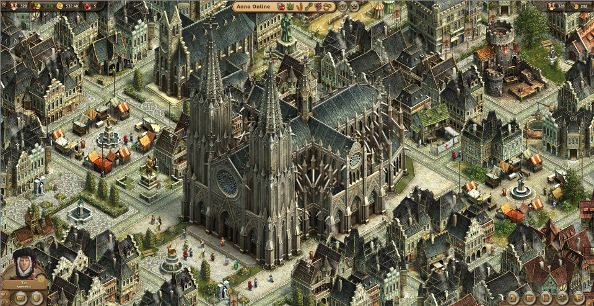 But before I can put down my first pioneer hut, the game slaps me in the face with one of the many fish I’ll be gathering, a fish named reality. Anno Online is a mite more complex than your typical browser-based city builder, and thus contains a plodding, thick tutorial that everyone must suffer through to prove their understanding of the game’s systems.

By the time I’m done with appeasing the advisors, know-it-alls, and random passers by, I’ve got the foundations of a burgeoning colony set up. Ramshackle residences for the feckless plebs, a lumberjack hut for that all important wood, a fisherman’s hut so that my plebs don’t starve, and a marketplace for my citizens to hawk their wares and linger around pointlessly.

An expanding colony demands resources for two things: construction and the fulfilment of citizen’s needs — they are a helpless lot. Wood, stone and money are required for the plonking down of new buildings, while food, drink and clothing will be demanded by the colony’s residents. Without a constant supply of resources to fulfil their basic needs, colonists won’t move in and those homes won’t generate money through taxation.

Anno Online’s hideous UI is effective at showing one where they have a resource deficit, as clicking on a home or a workplace reveals the goods the building has and requires, while selecting a warehouse shows what it has in stock and how much of that good is being generated. If your colony has a lot of wheat but doesn’t have enough bread, it’s a simple matter to construct a new bakery, and soon that wheat will be turned into fresh baked goods for your greedy citizens to gorge upon. 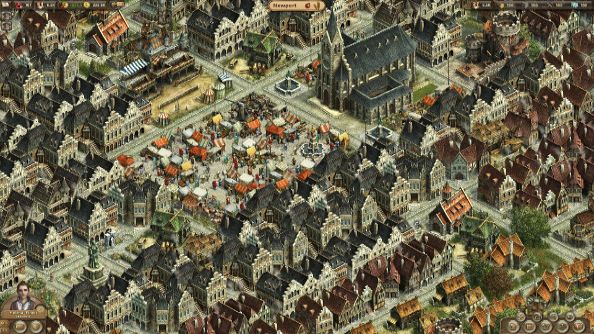 Eventually the island will start to attract a higher class of citizen, but they won’t be willing to settle down until they have an appropriate house — the dinky pioneer hovels simply won’t cut it. It’s at this point where the game grinds to a halt. Upgrading a pioneer residence to one fit for a vassal isn’t cheap, nor are the buildings that provide the resources these more affluent colonists desire.

The most basic good, wood, takes 1 minute 45 seconds to harvest from a lumberjacks hut working at 100% effectiveness, and each house requires 60 wood to move to the second tier. It’s an absurd length of time to wait to upgrade one simple home, even if it can be reduced by constructing multiple lumberjack huts.

The snail-like pace is made even more infuriating by the small amount of space provided by the warehouse, which can only be upgraded once your colony has reached a certain level. A full basic warehouse essentially allows one to play for about five to ten minutes, but after that the goods will have likely run dry, and it’s back to the waiting game.

Thankfully the colony continues to plod along even when you’re not playing, so it can just be left alone for a few hours. It hardly makes for compelling gameplay, however. Absent the battles and disasters found in Anno Online’s predecessors, there’s really not very much to do. 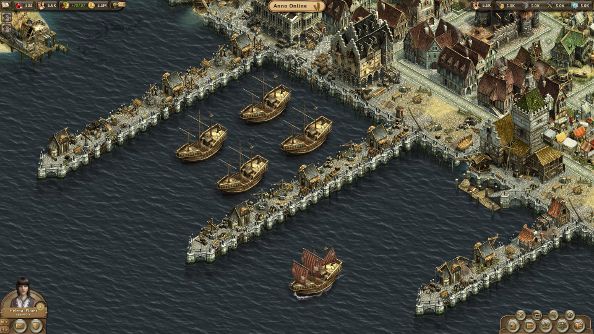 To Ubisoft’s credit, micro-transactions are not shoved in players’ faces, and one can play the entirety of the game without spending a penny. Yet the length of time it takes to do anything makes playing for free a long and boring process. Ubisoft doesn’t need to promote their cash shop, because without dropping some cash, players are limited to slapping down a few buildings and calling it a day.

I had hoped that once the game opened up, providing players with the ability to explore more of their base island, unlock multiple islands and trade with other people, I’d be able to play for longer, but this is simply not the case. It takes a good long time until you can start experiencing these aspects of Anno Online, but even when you’re juggling four extra islands (eight if you’re willing to pay) and selling your surplus to other players, it’s all over in a matter of minutes.

There are large construction projects that require multiple players to help out with, encouraging a spot of cooperation, but beyond that there’s little interaction to be found between players besides chatting. There’s no conflict, no competition and no real reason to treat it as a multiplayer title.

Unless you’re inexplicably desperate to fill a few minutes of your day with the planning of simple resource and manufacturing chains, then there’s not much reason to give Anno Online your time. It might be more engaging than other browser-based city builders, and it’s certainly less insidious when it comes to getting folk to waste their money, but there’s absolutely nothing here that isn’t better in Anno 1404 or Anno 2070.