BioWare have revealed Anthem – previously known as Project Dylan. It’s meant to be their answer to the MMO-lite, hobby-game genre that Destiny, The Division, and others have all spent time fighting over but what we’ve seen of it gives no hints. See that below.

We still don’t know much about it, other than that it’ll feature a city under siege, penned in by a wall. Outside the wall are monsters. You’ll be playing as a mech-suit-clad hero who heads out into the wastes to murder those monsters – videogames? Videogames.

We’ll see gameplay tomorrow, during the Microsoft conference. Some confusion arose from that announcement, thinking it meant the game was to be a Microsoft exclusive. That is not the case, as confirmed on Twitter by BioWare producer Fernando Melo.

Speaking of which, long time Mass Effect teaser and general manager Aaryn Flynn said there was a lot more to come:

We have a lot more of @anthemgame to show tomorrow. https://t.co/SISHXYfI3P

If you’re desperate for more, the official site is now up with a piece of art and a newsletter to sign up for. It looks pretty nice: 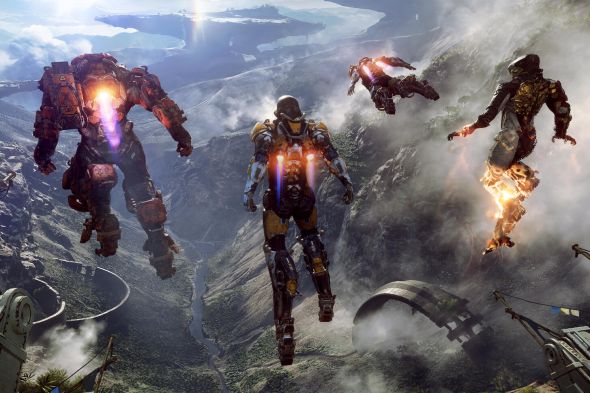