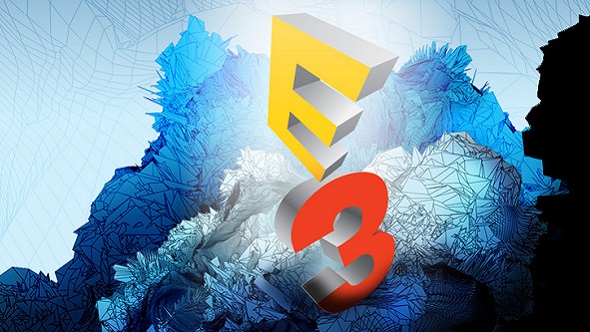 With E3 upon us, we now have a pretty good idea of what’s being shown. To help you navigate the week, we’ve put together this handy guide that includes all the dates for all of the press conferences going on during the show, plus links to the streams. Proceedings actually start on Saturday this year, thanks to EA getting in early with its special Play event, so be sure to turn up a day earlier.

See how many games you already have to get with our list of upcoming PC games.

E3 has created a timetable which shows you the time of every conference, no matter which timezone you’re in. Cheesemeister has also provided an equivalent schedule, which also includes EA’s Play event. All of the events will be streamed either via the official E3 Twitch channel, or each company’s dedicated Twitch stream.

Don’t expect much PC-related from Nintendo, unless we’ve fallen into a parallel dimension and they’ve finally decided to bring Breath of the Wild to PC. The only major PC-related news will be indies that are coming first to the Switch, then eventually making their way to PC, like SteamWorld Dig 2 and Wargroove.

A new games culture and community show hosted by Geoff Keighley, the E3 Coliseumwill be “two days of panels, conversations, talks and other surprises” that will aim “to bring the culture of games to life.” Expect appearances from leading developers and publishers, plus some celebrity guests. The Coliseum will be streamed live on Twitch Presents throughout June 13 and 14.

If you’re interested in the PC-related elements of Coliseum, look no further than this condensed schedule. The full one is available here, so be sure to check there for your console and wider interest needs.

Those are the big shows, but if you’re thirsty for more, there are plenty of other events to watch as you can see in Twitch’s schedule below. For more on what they’re up to for E3, check out their announcement here. 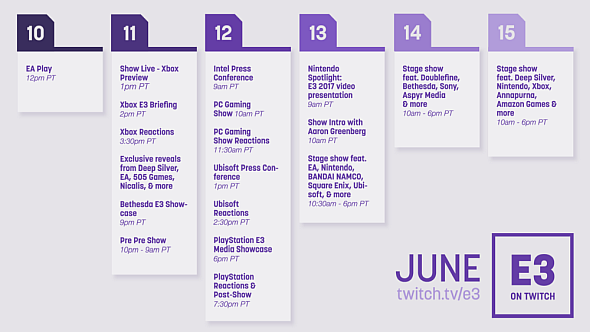 EA’s event is over and it went pretty much as you’d expect. Here’s what was shown, along with all the new details:

Surprisingly, Microsoft really pulled it out the bag for E3 2017. Their reveal of Scorpio – now know as the Xbox One X – was kept short and sweet, with the majority of the conference dedicated to new games. In excess of 40 games were show, from small indies like Cuphead to huge triple-A blockbusters like Bioware’s new IP: Anthem.

A short-but-sweet presentation from Bethesda introduced us to Fallout 4 and Doom in VR, a new expansion for Dishonored 2, The Evil Within 2, and the showstopper: Wolfenstein II: The New Colossus.

PC Gamer put together a great show, with Day[9] introducing a big collection of guests and games. On show was Battletech’s campaign, Lawbreakers, the new XCOM 2 expansion, and some exclusive Shadow of War footage.

Ubisoft offered quite the crowd-pleaser with Beyond Good and Evil 2, but not before showing off The Crew 2, Assassin’s Creed Origins, and brand new pirate game Skull & Bone.

Sony had little for the PC-bound but plenty to show. They even brought the console release date of Destiny 2 forward and another massively exciting remake. For us, there was all this.