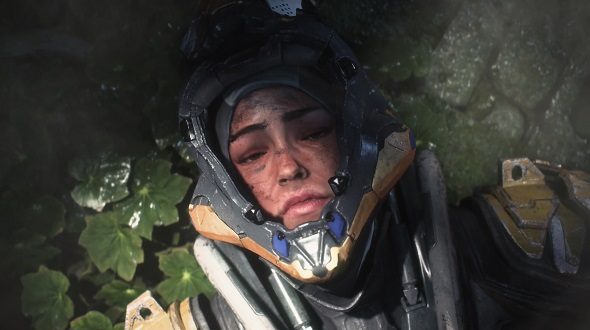 Anthem’s characters are voiced, and you’ll get the choice of a male or female character at the beginning of the game. In a tweet posted earlier today, Anthem’s lead producer, Michael Gamble, confirmed that your character will have a voice actor that you can hear during both cutscenes and gameplay.

Gamble’s comments follow the public release of the demo video that BioWare showed to members of the press at E3 last month. Between the narration of the demo, the voices of NPCs, and the fact that real players were used in the demo, there seemed to be some confusion about what was actually being shown.

Later still, when pressed further, Gamble states that “yes, your character in Anthem is voiced.” He goes on to say that you’ll have some element of character choice, allowing you to pick between a male or female character at the beginning of the game.

Yes, your character in Anthem is voiced – male or female choice at the beginning. https://t.co/5jYRwbRvW1

The inclusion of voice actors in the game is significant given that obvious comparisons can be drawn between Anthem and Destiny. While Bungie’s first MMOFPS had a few voice lines thrown in, Destiny 2 contained no voice acting at all, which left some fans disappointed.

The Anthem release date is February 22, 2019. To tide you over until then, you can check out 20 minutes of gameplay that was shown to press at E3 last month in the video above.