Anthem makes a hell of a first impression. It then smothers its strong start with a burdensome campaign, before showing a final glimmer of potential in its endgame. It’s quite the rollercoaster.

There are bright spots, no doubt. The scenery doesn’t vary much, but it doesn’t need to when it looks this damn good. Waterfalls tumble from alabaster cliffs, between emerald treetops, into bioluminescent swamps. The thrill of swooping off a cliff, skimming low over a river to cool your jets and kicking up spray as you go, never wholly erodes – and it’s refreshed each time you unlock another of Anthem’s flying exosuits, or javelins, and feel your way around its unique quirks.

The same is true of combat. Some enemies are spongier than I’d like, but that’s so you’re nudged into learning a key mechanic: an evolved version of Mass Effect’s combo system. Certain ability attacks can ‘prime’ an enemy for a combo, while others will ‘detonate’ enemies who have been primed, dealing bonus damage. You won’t see much deliberate coordination of this in the campaign unless you group up, but nor will you need it. It’s only in the endgame that the character builds and teamwork to land combos become essential.

Each of the javelins has a distinct role to play. As a Storm, you are a lordly mage, floating above the carnage and dropping elemental bombs from on high, able to both prime and detonate combos with ease according to your loadout. The Interceptor offers the opposite experience: survival requires agility, which means chaining dodges, dashes, and triple-jumps. It’s highly kinetic and ‘micro-heavy’, in strategy parlance, but it looks and feels wonderful – just look at this clip from u/Hakan on Reddit to see what’s possible.

Bioware seems to share Bungie’s view that the ‘power fantasy’ is crucial to invest players in these long-term hobby games, and when it comes to your javelins, it has absolutely nailed this. Which is why its repetition of some of Destiny’s prominent mistakes is all the more baffling.

As fun as combat can be from beat-to-beat, its rhythms hardly vary. Perhaps 90% of missions – at a conservative estimate – follow an identical template: fly to a place, kill enemies, and repeat twice more. Sometimes you’ll complete an objective before, during, or after these fights, but they’re plucked from a short menu of boring tasks we’ve seen a thousand times, such as ‘bring the things to the thing’, ‘follow radar blips to find the thing’, and ‘defend the thing’. Destiny players don’t need reminding of the scorn heaped upon that game for its over-reliance on the last of these.

Strongholds, once described by BioWare with blithe inaccuracy as “a raid-type thing”, simply scale up this formula rather than fundamentally change it. The first unlocks at level seven – pretty early in the campaign – and features ‘bring two times as many things to the thing’, twice, followed by ‘defend the thing, but for longer’. Then there’s a boss. Two more unlock after the campaign, one of which is a repeat of the final story mission, which demonstrates how little Strongholds and missions differ in concept. Strongholds are in fact a dungeon-type thing, far more like a Destiny strike than a raid. 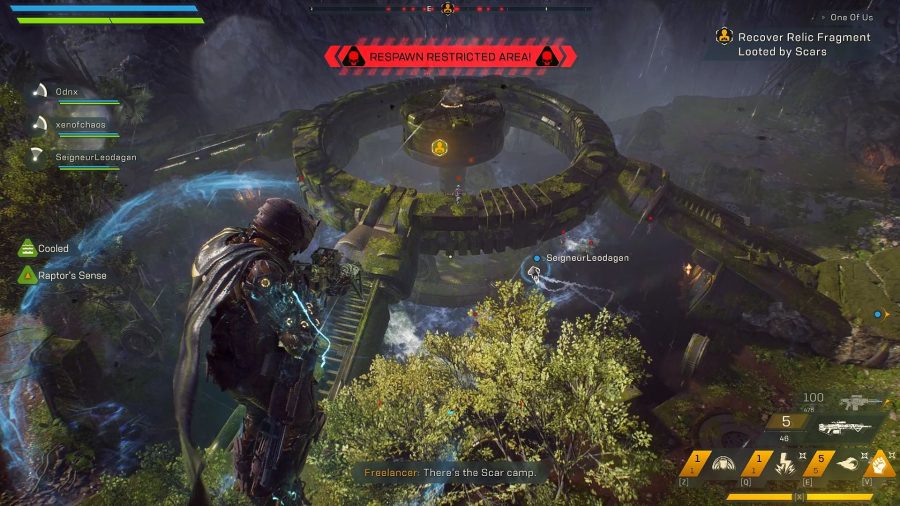 The campaign’s story stars some of Anthem’s better characters and throws out the occasional surprise twist, but it never tries to say anything more interesting than ‘friends and bravery are good’. Its villain is a bit of a let-down, too – he’s absent most of the time and ultimately motivated by nothing more than simple megalomania.

There is a hair-tearing amount of downtime between missions

It all feels very safe and very tired, which is a shame given that the backstory is actually pretty cool. Anthem’s world was made by the Shapers, a race of godlike beings who channelled a force of pure creative energy called the Anthem of Creation. They did this with a set of tools known to humanity as relics, but left the job half-finished and their tools behind. The Anthem throws a tantrum whenever it comes across them, and as a javelin-flying soldier called a freelancer, it’s your job to calm these ‘Cataclysms’ and protect people from their effects.

In your charge is Anthem’s main hub, Fort Tarsis, a desperate community fighting to survive the world’s inherent violence. And violent though it is, it’s also a world of vitality and energy, especially compared with the desolate, death-hollowed solar system in Destiny. Some great stories could be told here, but have yet to be. 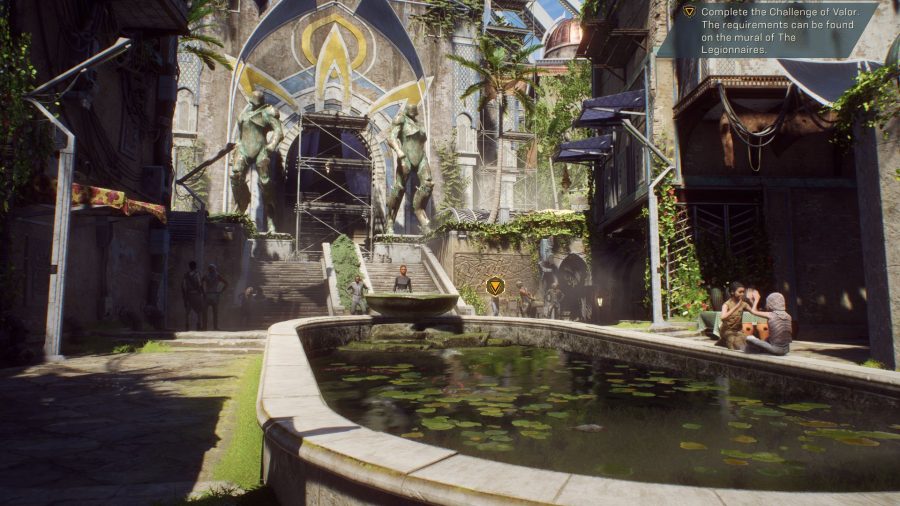 You’re nudged back to Fort Tarsis after each mission, though the Launch Bay area lets you circumvent this, which is the only use I’ve personally found for it. A number of dialogue markers will then pop up on your map, and if you’d prefer not to miss anything, you’ll want to check them all out. But Tarsis isn’t small, and even with the addition of a sprint button you’re not quick. The result is a hair-tearing amount of downtime between missions.

It wouldn’t be so bad if these dialogues were more consistent. At its best, there are some genuinely moving sub-plots in Anthem. Yarrow, a freelancer captain, has the ostensibly noble desire to honour his comrades’ sacrifices through a commemorative wall, but one of those comrades argues this only serves to inspire more impressionable youths to sacrifice themselves, like the jingoistic propaganda put about before World War I.

Then there’s the old woman who’s been waiting a decade for her son to come back alive from an expedition. She confuses me for him, justifying her delusion by referring to the Anthem: if you love someone enough and pray to it hard enough, it’ll send them back to you in some form. Who am I to say she’s crazy in a world where an unknowable force of pure creation exists? She may even be right, since I’ve little idea of my own backstory. 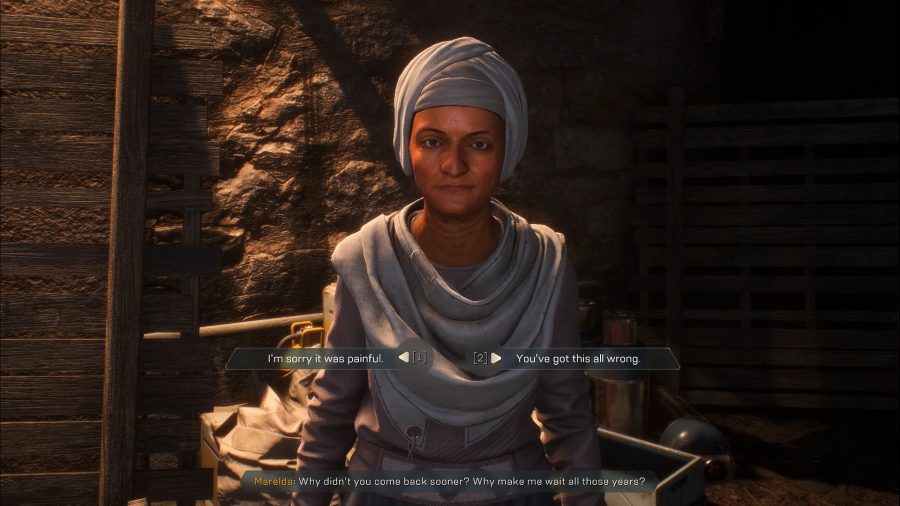 But for every one of those, there’s at least one more where I simply don’t care about the character or their dilemma, and find it faintly ridiculous that I’m playing therapist to desperate strangers who want me to validate their life choices, or talk their loved ones out of theirs. Not only do I have bigger problems, like saving the world from a Marvel villain lookalike or whatever, but – and this is no less important – sticking my nose into your personal business is bad manners.

The dreariness of trudging around Tarsis to listen to only occasionally interesting people is exacerbated by the loading screens between game states, which have already been merrily mocked on Reddit. The big one – from Tarsis to the open world – has been cut from over two minutes to roughly half that by Anthem’s day one patch. It’s a welcome improvement, but still isn’t exactly snappy, and load screens continue to add a general sense of flab through their sheer ubiquity. 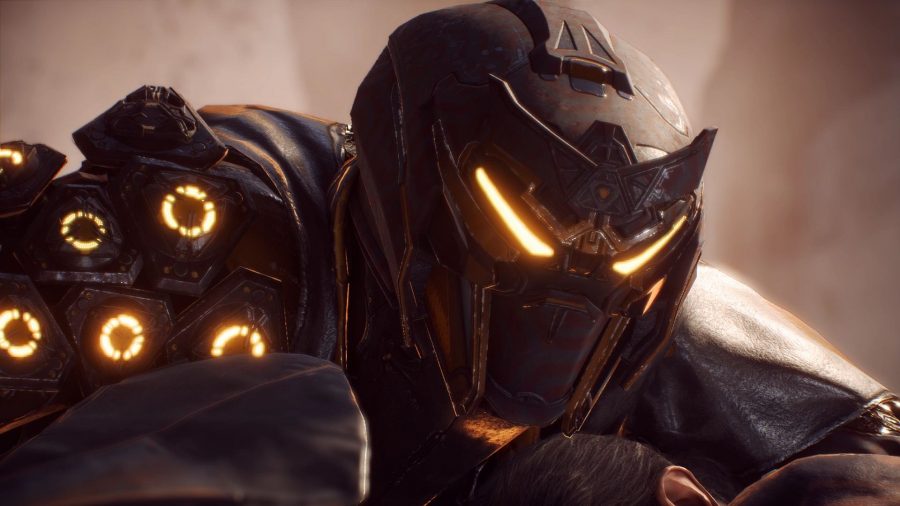 The upshot is that Anthem’s campaign is an overall chore that will test your commitment to the whole enterprise. It certainly tested mine. Fortunately, matters brighten when you hit level 30 and unlock the Grandmaster tier I, II, and III difficulties. This is Anthem’s true endgame. You’ll never need to optimise your build during the campaign, even if you play on Hard – it’s where you learn the ropes. Grandmaster, though, cranks up enemy health and damage, forcing you to explore every avenue in response, and revealing the depth of Anthem’s build system.

Anthem's in-game shops sell both crafting materials and cosmetic items. Coin can buy either and is earned by playing, while the real-world currency, Shards, can only buy the cosmetics. Cosmetics include new emotes and armour modules, and the materials and stenciles with which to decorate them. Coin drops are inconsistent, but the overall accretion rate is not miserly.

You can choose two weapons, two javelin class abilities, and a support power. You can further modify your build with six component slots that offer universal perks, like more ammo capacity or melee damage, but also niche or class-specific ones, like more shield bash damage for the Colossus. Masterwork gear also starts dropping when you hit the late 20s, which finally brings Anthem’s loot – irrelevant until then – to the fore.

Masterwork weapons have unique graphics and a special perk that defines their playstyle. They’re nowhere near as distinctive as Destiny’s Exotics, but at least I’ve become fond of some of mine, which is more than I can say for the rest of Anthem’s loot. Wyvern Blitz is a thunderous sniper rifle that deals +40% headshot damage when floating, which my current Storm build pairs with a Masterwork machine pistol that doubles weapon and melee damage for five seconds after hitting an enemy at point-blank. 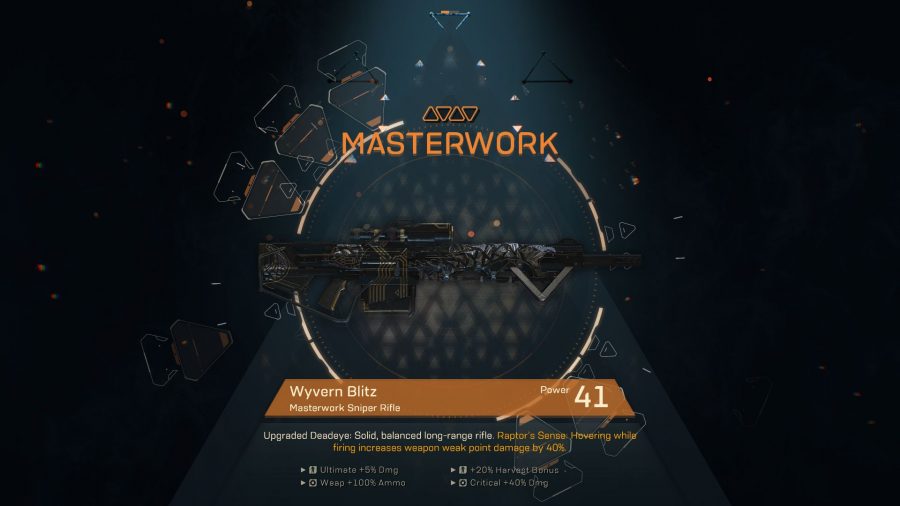 So I’m hosing enemies down at close range, jumping back and into the air, and going for the head with my sniper. It’s thrillingly overpowered fun on Hard, but near-essential on Grandmaster, and has been a rewarding discovery. Hardcore theorycrafters will be able to find far more inspired synergies across Masterworks and the other elements of Anthem’s build system, but I seriously doubt the endgame’s wider appeal as long as the same rote missions are the only things you can actually do.

Anthem is a long-term bet; EA has released a roadmap that advertises new content across at least three acts. Unfortunately it looks like more of the same until the Cataclysm at the end of act one, which we still don’t know much about.

Related: Get stronger, quicker, with our Anthem levelling guide

And with so many more compelling live games around now – including direct competitors which offer both PvP and raiding – Anthem won’t enjoy the same forgiving environment that the first or even the second Destiny did. Whether it can attract, much less retain, the large audience EA clearly wants without some major changes is a very open question.

Beautiful and mechanically robust throughout, but weighed down by repetitive missions, a flabby structure, and a lot of the people you meet in Fort Tarsis. Even the strongest beats become tiresome if repeated or drowned in white noise, and that’s Anthem in a nutshell.