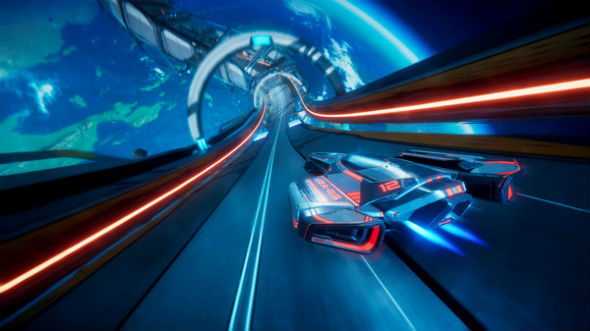 Here are some of the best racing games on PC.

The game’s trailer gives an idea of the game’s blistering speed, as players hurtle along blindingly fast. Developers Cybernetic Walrus say that the game has no speed limit, meaning the speeds you can reach during races are determined only by your own skill, although you can also customise your vehicles to improve their performance.

We had a chance to play the game at GDC last week, and found it to be a rather pleasant slice of face-blisteringly fast nostalgia. Rather than weapons, the game uses traps which you can activate by using collectable tokens – the same tokens also fuel your boost, however, so strategic management is essential. We slammed into a few too many walls getting used to the twitchy controls, but managed to come first in one race nonetheless. We know, you’re impressed. We would be too, if we were you.

There’s a full single-player campaign, as well as online and split-screen multiplayer. The latter allows you to sabotage your opponents, setting up damaging forcefields, collapsing tunnels on top of them, and then boosting away into the distance.

Antigraviator isn’t out until later this year, but has already impressed – it was a finalist in the 2017 Unity awards, received an Honorable Mention at the GDC play awards, and won the Unity 3D game art challenge at the conference.