AOC (the monitor manufacturer, not politician Alexandria Ocasio-Cortez) has joined the likes of Samsung, ASUS, and Philips by launching a 49-inch, 32:9 aspect ratio monitor with a resolution of 5120×1440 – which it’s coined ‘Dual QHD’, as it’s the equivalent of two 1440p panels stuck together. And of course, it couldn’t be called a gaming monitor without its 120Hz refresh rate and 1ms MPRT response time.

The screen in question here is a VA panel that has a slight 1800R curvature and HDR support, which should give some nice colour contrast if you’ve got the PC to support it – and you really should if you’re considering buying such a ridiculously large piece of kit. This ultra-wide display would be one of the best gaming monitors for immersing yourself in the cockpits of simulation games like Microsoft Flight Simulator or Assetto Corsa Competizione, or for productivity with multiple inputs allowing you to have a picture-by-picture mode showing two separate screens at once, each in their own 16:9 aspect ratio.

Like most of the top gaming monitors, AMD FreeSync comes as a standard – and you should be able to get FreeSync working if you have an Nvidia card, too. A built-in KVM switch lets you use your keyboard and mouse on both your PC and docked laptop without having to waste time switching cables around, which is a nice touch.

The AOC AGON AG493UCX monitor is available now, with a retail price of $999 / £899, which is pretty competitive when you compare it to the price of Samsung’s similarly-specced options. 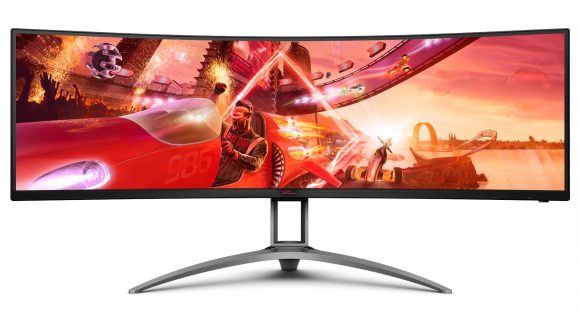 You’ll want one of the best graphics cards around to power that gargantuan 5120×1440 display, however – and its monstrous size means you’ll struggle to fit this monitor onto any normal desk, so this is no casual undertaking.