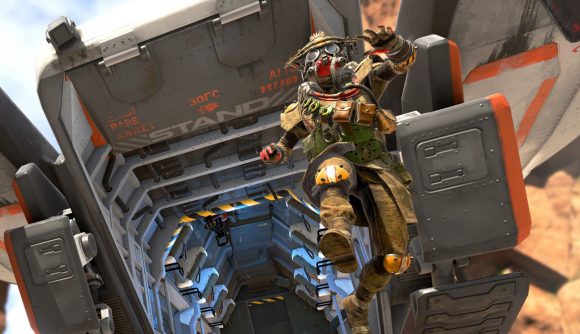 February 5, 2019 Respawn’s CEO says you should stand by for more Titanfall.

Apex Legends has been an emotional rollercoaster for Titanfall fans. First came the news that the next game in the Titanfall universe would be a battle royale without any titans at all. Then, as our PC review-in-progress shows, we found that it’s good – often even great. But then we learned it came to us in lieu of Titanfall 3. Now, apparently, there’s a proper Titanfall on the way regardless.

Respawn CEO Vince Zampella tweets that – in addition to the plans set for the Apex Legends roadmap – “We are also working on more Titanfall for later in the year (yes, I said the T word). We love being able to experiment in this crazy universe!” When a fan suggested a bit later that this would be a VR game, Zampella replied in no uncertain terms: “No!”

Oculus and Respawn have partnered for a VR game, but the implication was that it’d have a more grounded war theme. That’s not impossible in the Titanfall universe, but it’s not altogether likely, either. Now if you’d like to guess that this would instead be a mobile game or some sort of media tie-in, that door’s open – but Zampella would certainly know what expectations come alongside the words “more Titanfall.”

Still, it’s curious news given what else Respawn has had to say this week. “We’re doing a free to play game, with essentially loot boxes, after we were bought by EA, and it’s not Titanfall 3,” lead producer Drew McCoy tells Eurogamer. “It’s the perfect recipe for a marketing plan to go awry, so why have that – let’s just ship the game and let players play.”

McCoy also says “the world thinks we’re making Titanfall 3 and we’re not – this is what we’re making.” A Kotaku report suggests that Titanfall 3 was “well into development” as of 2017, and was set to launch last year, but based on McCoy’s comments it seems that work on that game has essentially morphed into Apex Legends – which meant prospects for a Titanfall 3 release date this year seemed slim.

Read more: How many upcoming PC games are we waiting on?

The Apex Legends gameplay reveal hit yesterday just before launch, and you can go download and play the game for yourself right now. At least you’ll have the chance to play it for yourself before wondering what this means for the future of the series.