Have you ever wanted to ride a dragon? Assault a castle? How about don goggles and drive around in a steampunk car? In ArcheAge, the epic MMO that mixes fantasy combat, home ownership, and pirates in a zoneless open world, you can. And, thanks to the brand new update, ArcheAge: Unchained, its doors are flung wide open.

So, what exactly is ArcheAge: Unchained? In simple terms, it’s a version of the game that levels the playing field. Rather than using the free-to-play model of its earlier incarnations – which, incidentally, go as far back as 2013 – now everyone pays a flat fee upon entry. No more powerful premium content, and no addition of a monthly subscription to make up for it. Progression in ArcheAge: Unchained is tied not to the money you put into it, but the time. And you’re going to sink a whole lot of time in here, believe us.

ArchePasses are a major new feature to compliment the new model. You can select up to three different passes which offer you quests every day. They’re based on different categories, including combat, vocation, and equipment, and new ones come along every 90 days. Progress through the passes by completing missions and you’ll unlock lots of lovely rewards at each tier.

You can choose either the free track of the pass, which contains everything you’ll need to level your character and stay competitive (we’re talking things like labour potions and infusions), or opt for the premium track, which is more focused on cosmetics. Rewards for the latter track include costume images or dye tickets. 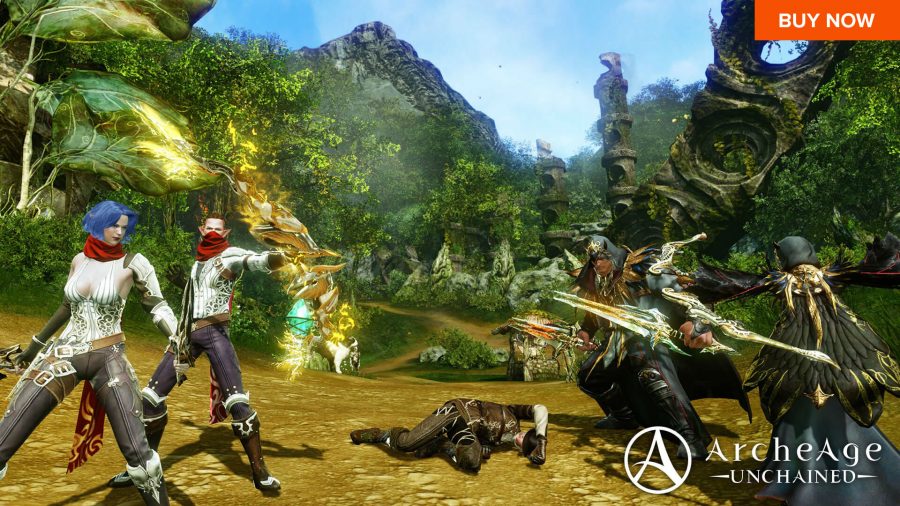 Not only does developer XL Games reward you handsomely for completing ArchePasses, but it showers you in something called Diligence Coins, too. Think of them less as coins and more like tokens representing your hard work. They’re your means to acquire powerful new gear in the marketplace, including labour recharges, tempering charms, boosts, pets, and farm kits. They probably should’ve been called ‘good job cookies’, but we digress.

However, don’t confuse diligence coins with credits, which is the currency you acquire using real-world money. Credits are how you buy premium tracks of the ArchePasses, as well as cosmetic items such as, say, furniture for your house, clothing for your body, and user-created content for your, err, mind.

If you’re worried this new version of ArcheAge will split the community, have no fear. Free-to-play servers will remain active, and share exactly the same content as ArcheAge: Unchained. Also, the labour system is equal for everyone, with uniform regeneration levels, and a set labour cap of 5000.

But there’s more to the game than a new pricing model. ArcheAge: Unchained releases alongside the Shadows Revealed update, which itself contains a bunch of fresh content. The Swiftblade skillset is arguably the biggest addition, and raises the available class combinations to 220. Shadows Revealed also introduces the area of Stillwater Gulf, as well as an intriguing battle royale mode that takes place exclusively on ships. Boattle royale, anyone? Anyway, check out the video above to see the beautiful overhauled visuals.

ArcheAge: Unchained is out now, and you can buy it here. With its new pricing model and raft of incoming improvements, now is a very good time to start playing ArcheAge.