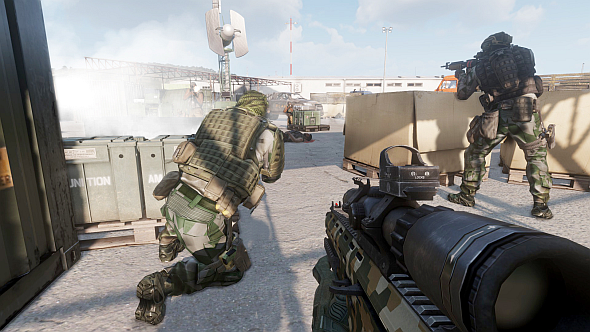 Argo is a new tactical multiplayer FPS, developed in Bohemia Interactive’s ‘incubator’ programme. Bohemia – who also publish DayZ and Arma – say it’ll be available for free on Steam and the Bohemia Store on June 22. Don’t assume too much about its business model, though: it “will not feature microtransactions or require any other form of payment to play.”

For more free games – though perhaps with a few microtransactions – check out the best free games on PC.

The game is the polished version of Project Argo, which has been in open testing for some months now. It will pit two mercenary factions against each other on the island of Malden, “a reimagination” of the same terrain in Operation Flashpoint: Cold War Crisis, the game that became the first Arma.

There are three 5v5 game modes, a ten-player co-op mode versus AI, a scenario editor, and an experience-based gear unlock system. To get a taste of the game modes – Link, Raid, and Clash – check out the associated YouTube videos.

Though Argo has no microtransactions, if you want to support its development, you can buy the “completely optional” supporter’s pack. That’ll come with the usual cosmetics (14 animations, 22 apparel items, your name highlighted on leader boards), as well as the ability to use vehicles in the scenario editor and access to premium servers.

To celebrate 16 years since Operation Flashpoint: Cold War Crisis, Bohemia are also releasing the new Malden map in Arma 3. For more on Argo, check out the website. If you fancy a play with its prototype, you can still play Project Argo for free via the Bohemia Store.