“It’s got dinosaurs in it.”

That’s about the only pitch I needed when I was wondering if I should play Ark: Survival Evolved. Certainly, nothing else about the currently very popular Early Access game jumps out as noticeably different from the deluge of survival sandboxes that have flooded Steam.

It’s another one of those survival games where, yes, you craft a lot of stuff and, of course, you build some buildings. There are other people doing similar things in the same world, and maybe you’ll join up with them? Maybe you’ll kill them?

But this one’s got dinosaurs in it! And if anything can spice up a genre that’s become a bit stale in a very short space of time, it’s the wonderful beasties that used to dominate this silly world. 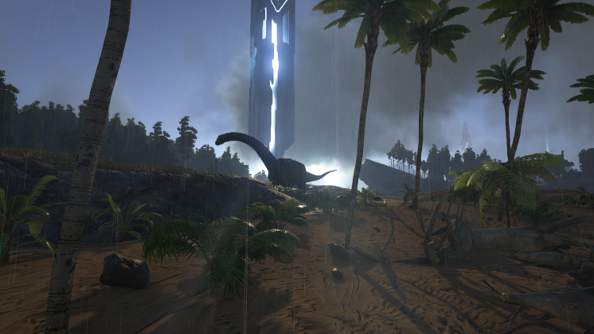 Ark: Survival Evolved wastes no time at all in introducing its hook. The moment you wake up on the beach in whatever section of the world –an alien world, at that –you decided to plonk down your custom survivor man or lady, you’re faced with giant, stomping dinosaurs. And gosh, it’s the best way to start a game.

Some five minutes after I started to dance around and under a family of brontosauruses (apparently they might be a distinct species, after all), I was faced with the game’s second hook: this is an enigmatic alien world, and you wake up in it not knowing a thing about it. Everything’s wrapped up in a sci-fi mystery, elevating exploration beyond simply looking for resources to a trek to solve the game’s narrative puzzle.

The mostly unspoiled island is pretty, in that holiday brochure kind of way: lots of golden beaches and lush forests, occasionally interrupted by ugly shacks or bizarre alien structures. It’s lovely when you’re standing still, but moving reveals how poorly optimised it is at this stage of development. Ark simply runs terribly. 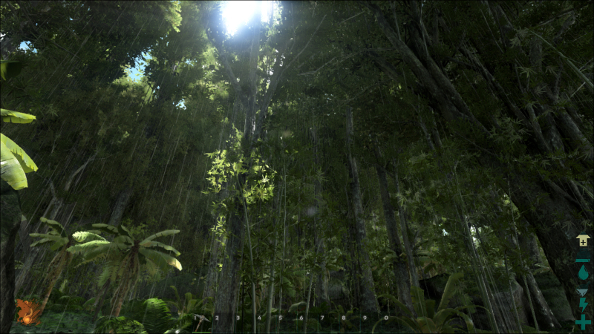 It’s par for the course, it seems, even in open world games that aren’t indie efforts on Early Access, but in Ark the optimisation issues are significant enough to recommend waiting for improvements before taking a look. The high preset is recommended for players with a GTX 970 or an equivalent GPU, which I have, but 60fps is a pipe dream. Even when all the bells and whistles are turned off and the game looks, frankly, rather ugly, it still runs quite poorly, and stuttering seems to be prevalent no matter what settings are employed.

The bloom is also absurdly strong, and there’s no in-game way to turn it down. Even staring at a patch of wet, reflective sand is like staring right into the heart of the sun, and given the amount of sand, sunshine and water, the game is blindingly bright most of the time.

It was as I was tutting at the over-zealous use of bloom that I noticed my first dodo, punched it, and then all was right with the world. I punched it to death, and then punched it some more, until the Dodo became meat. This is what it’s all about, people. Life, I mean. Punching extinct animals until they become slabs of tasty meat. 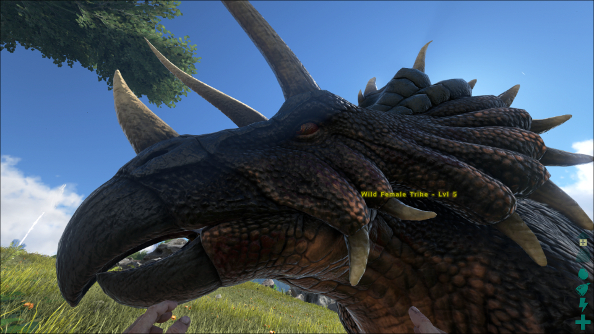 I wondered, “What else can I punch into meat?” The game responded by throwing a triceratops into view. I punched that beautiful animal; a majestic, mighty creature which our world has not seen the like of for millions of years. I punched it into meat. And then I cooked that meat. It’s okay; this is a survival game, and we’re allowed to be monsters.

The simple joys of beating up dinosaurs with my fists almost hides the unfortunate truth that combat in Ark is just awful. It’s jerky, there’s almost no feedback, and dinosaur animations, normally quite good, are considerably poorer when they are aggressive. Combat also makes you knackered. Well, this being a so-called “hardcore” game, everything makes you knackered. You’re usually too hot, or too cold, or starving or maybe just dehydrated. You basically play the worst person to go on holiday with.

These constant complaints and needs push you forward, though, forcing you to think about your surroundings and hunt for resources. It’s just a shame that all these meters drain so quickly, and they simply aren’t particularly interesting ways to inspire exploration or resource gathering. 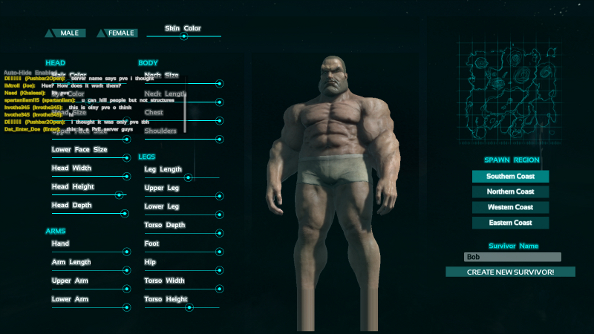 Initially, players are stripped down to their skivvies, and all resource gathering must be done by hand. When you’re picking up stones and herbs, that makes sense, but how do you get wood from a tree with your hands. The answer should be clear, by now: you punch the shit out of it. I found this incredibly stupid, at first, but there’s something earnest about how hard the game tries to make it seem like punching a tree to get wood is a thing you could probably do.

The damage done to the trees generally resembles the shape a heavy, fist-shaped object might leave on a tree, and there’s some feedback in the form of sound effects and even damage. Yes, it acknowledges that punching a tree with your fists would hurt. It didn’t take long before the concept of tree punching made perfect sense to me.

You should probably use a proper tool, however. Axes and the like can gather more resources, and all of the early objects, including basic clothing that protects against the elements, can be put together in about half an hour or less. Ark still suffers from the fact that gathering basic resources is rather dull, though. Things get more interesting when you’re competing with other players or sneaking around, trying not to draw the gaze of a predator, but often there are no threats, and it’s just busywork. Clicking on objects and watching items appearing in your inventory is neither fun or engaging.

That said, attempts have been made to make gathering more thoughtful than it is in so many of Ark’s contemporaries. Most resource sources, whether they are trees or corpses, contain a variety of resources. Thatch and wood can be gathered from trees, while hides and meat can be torn out of carcases. What you get more of depends on the tool you use. It makes gathering less of a gamble, and cuts down on time wasted getting useless resources. 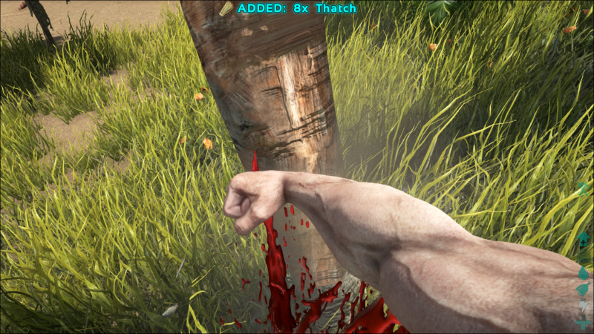 A wee bit of RPG has found its way into what is otherwise a survival game, and there’s nothing I particularly like about it. Everything seems to reward players with experience points, which makes the whole system a strangely passive feature, until enough points are accumulated for a level up. A new level means a point can be put in a bunch of statistics like melee strength or speed, never really enough to make you feel any different between one level and the next, and, more importantly, different points can be spent on engrams. These are blueprints for everything you can build in the game, essentially tying crafting to levels. At the moment, it feels like a half-baked progression system with arbitrary limitations that only exist to justify the system itself.

Usually, in similar games, it’s a good idea to put “build a shelter” right at the top of your Things To Do list, and in Ark it’s even more important. When you log out, your character sticks around, unconscious and vulnerable, a ripe target for robbers or murderers. Such an ignoble end can be avoided by simply building a home, making it perhaps just a wee bit too much of a hassle for other players to rob you. But you can’t do that, because of this RPG system, which demands that you level up and spend points gained from wandering around aimlessly on learning how to build walls, foundations, roofs, doorframes and doors.

This is probably why I found so many slumbering people just lying on the beach or in the forests. They’re all new players, not yet able to build even a simple shack. 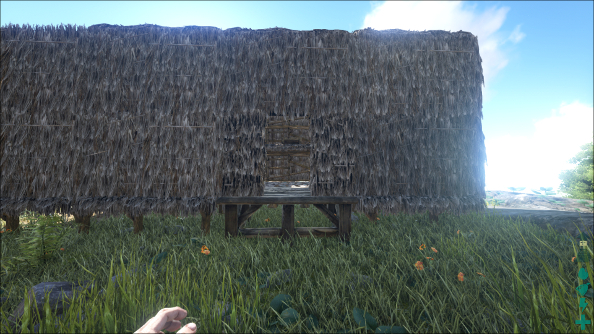 I confess that I was more pleased with my humble abode when I finally finished it because it was such a pain in the ass to wait for. Construction, at least, is a doddle. I went from homeless to houseproud in 30 seconds. It’s not much to look at, unfortunately. Most of the dwellings I’ve looked at have been very simple, and they’ve all been utilitarian. There’s not much room for creativity or cosmetic concerns at the moment, and maybe there won’t be. Maybe it will always be shacks and fighting tribes. I did spot some sort of water pipe on my wanderings, though, so while the structures might look rather plain, there are lots of practical things waiting to be crafted.

When the hell am I going to mention riding dinosaurs, right? I mentioned them earlier and didn’t say a single thing about swanning around on the back of a raptor, or using a brontosaurus as a gargantuan pack mule. Always leave them wanting, someone definitely said.

Okay! So, riding dinosaurs. Christ, it’s a hassle. I’m an impatient man, and I’ve never had the soul of a babysitter, so looking after a slumbering dinosaur for a day just isn’t something that I’m really interested in doing. I did it, though! All for you, and I only resent you a tiny bit. I like the taming aspect of dinosaur enslavement in concept, the way it requires planning and patience, the need to find the right food and even the right herbs, to drug the dino, but actually doing it is a slog. 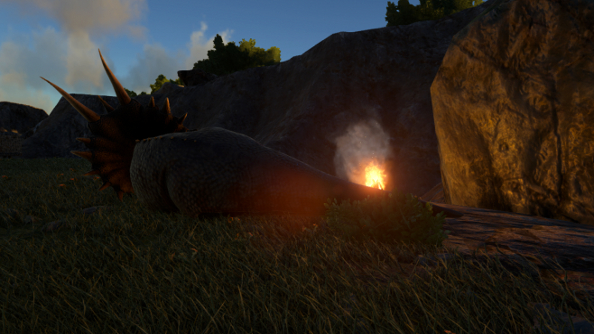 With a group, it’s significantly less hassle, and really, that’s how Ark should be played: with a tribe, working together to get everyone some badass dinosaur mounts. And there’s a lot of potential for the domesticated dinosaurs to create some interesting, emergent stuff. I’m imagining merchant caravans, a long line of long-necked beasts, lumbering towards a village, laden with resources. Wouldn’t that make a lovely target for some ruffians atop raptors and T. Rexs?

I’m surprised. I plodded through the game, in my first hour, growing more and more bored after the initial excitement of finding myself surrounded by dinosaurs, but somewhere, after that first hour, I found myself getting more invested. I started browsing forums and looking for advice, started to get used to the hardcore mechanics that I normally find so tiresome, and became utterly obsessed with picking fist fights with every living creature I came across. I also drowned a sleeping man. I’m sorry. I think a megalodon ate his corpse. I don’t know what came over me. I just wanted to share that, and hope for forgiveness.

Ultimately, I’ve enjoyed mucking around in this dinosaur paradise. I’m going to stop, though. The terrible performance frustrates just a bit too much, and combat needs a lot of work before it even becomes serviceable. Ark definitely does stand out in a sea of survival games, however, and the developers have already released a bunch of patches, with a major content update due this Friday.