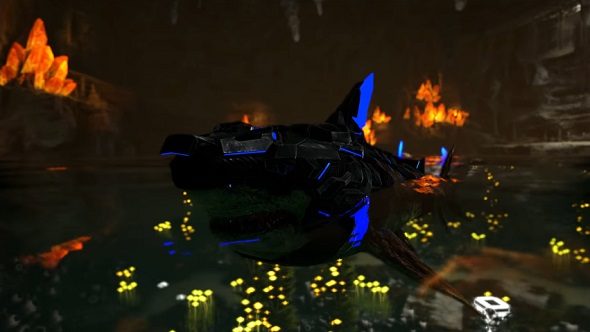 Following its short delay to allow for rapid volcano evacuation, Studio Wildcard have released patch 257 for Ark: Survival Evolved. Along with the Tek Cave dungeon hidden in the depths of the now active volcano, this update adds more prehistoric beasts and additional items in the Tek Tier.

Survivalists should check out our list of the best PC survival games.

For wannabe evil villains, patch 257 adds the long-awaited Megalodon saddle to the Tek Tier, allowing players to set up tanks full of sharks with laser beams attached to their heads. If you aren’t one for living weaponry, the new Tek Turret acts as a laser-spewing upgrade to the traditional Auto Turret while the new Tek Grenade gives players access to a new sticky explosive.

For those who can’t be bothered with the arduous task of breeding a new dinosaur army, the new Tek Cloning Chamber allows players to clone their favourite beasts at the cost of some Elemental Shards. All cloned creatures will retain the stats, level and appearance of the original beast, but be wary that Elemental Shards aren’t exactly easy to come by.

As for the new creatures coming in this update, the Giant Bee can act as a constant source of honey for sweet-toothed survivors. You’ll need to capture and tame a queen bee in order to build your own hive, but the results mean tons of honey to bait your traps. For those looking for a new mount, the “Hell Pig” may be your new best friend. While they chew through food at a rapid rate, their abnormally high metabolism means they regenerate health at an alarming rate. Perfect for raiding or hunting parties, the Hell Pig’s metabolism also affects nearby allies, boosting their health regeneration as well.

The new Lucky Liopluerodon is a mythical beast that circles the island, granting players extraordinary luck if they manage to tame this aquatic beast. While a great boon to treasure hunters, this beast will use its luck to escape its captor’s clutches so keep an eye on this giant sea creature. Finally, the Kentrosaurus makes for a perfect compound defender, thanks to its fierce temper and spiky tail. Get a herd of these guys together and you have the ultimate dino-defence force.

For end-game adventurers, the Tek Cave is filled with some of Ark’s most difficult boss encounters, so stock up on high-level items before even attempting the journey to the volcano’s crater. If you do manage to complete this dungeon, players will be able to Ascend, essentially starting a sort of New Game + mode where bosses are much harder and you start with a brand new character.

For all the details on patch 257, check out the trailer above and the full patch notes over on Ark’s official website.