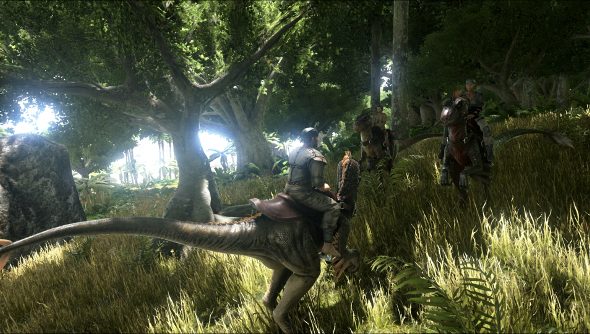 I am torn, friends. Ark: Survival Evolved, which was announced yesterday, is an open world multiplayer survival game with crafting, hunting, farming and all the stuff that you’d expect from a game in this saturated genre. But it’s also got dinosaurs in it! And you can ride them.

Yes, this sounds a bit like The Stomping Land, which raised a hefty amount of money on Kickstarter and was eventually cancelled, but maybe this one will stick around. Point your eyes at the trailer below.

As well as dinosaurs roaming the land, there are other beasties too, like the gone but not forgotten dodo and… a dragon. There’s some sci-fi shenanigans going on too, hinted at in the trailer by strange, tall structures, which might explain why mythical creatures are rubbing elbows with dinosaurs.

It’s coming to Steam Early Access on June 2nd, and it will boast quite a lot of content even early on. You can see the full list on the Steam page, which includes over 30 creatures, survival mechanics, and RPG system, 100+ player servers, mod support and a tribe system.