As there are tonnes of Ark: Survival evolved dinosaurs to tame, it can be difficult to know where to spend your time and resources. Do you go for a T-Rex? Or play it safe with a Carno? Keep levelling a Pteranodon? Or try for an Argentavis? Never has anyone outside of Jurassic Park had to ask so many questions about dinosaurs.

To help you make your mind up, we have put together a handy Ark taming guide on the topic. Below you will find a list of Ark: Survival Evolved’s most useful dinosaurs and creatures that you should set about capturing immediately. When putting this list together, we considered a creature’s utility, their base stats, and how easy they are to tame overall. It should prove especially useful for Ark beginners.

Even if you’re not a beginner, we think our tips should help refresh even the most seasoned dinosaur game veteran on the key things to look for in a helpful dinosaur, and no, that doesn’t include purple skin and a fondness for first-grade education topics.

Here are 10 of the best Ark dinosaurs for you to start taming: 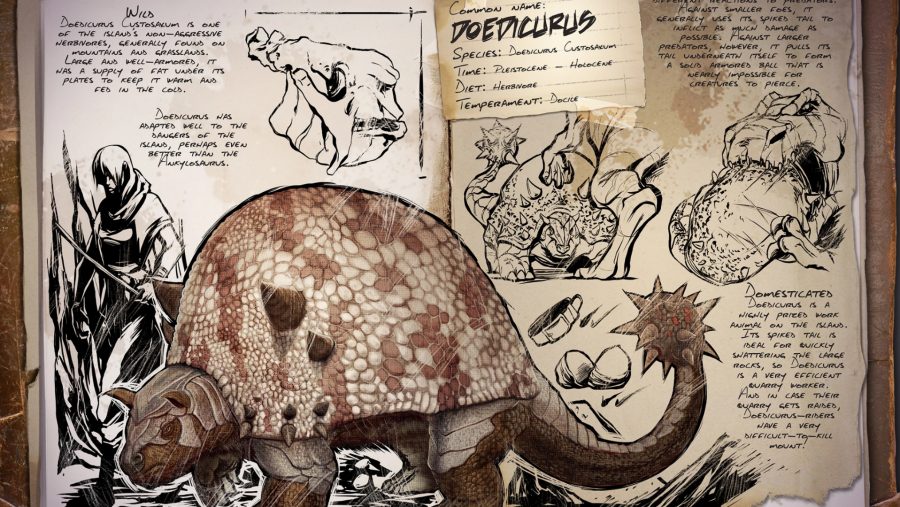 Our first dinosaur, the doedicurus – or doed for short – is an armadillo-esque mammal, typically found around the Red Peak, Frozen Tooth, and Grand Hills areas of The Island. It can be used to harvest obsidian and stone, or as transport due to its rolling ability.

It is very difficult to kill due to its hardened shell. If its health ever drops below two thirds, it will simply crawl up into a ball, taking less damage from predators. To knock it out, pack some tranq darts or arrows and aim for its head. If possible, make some dilophosaurus kibble for food as this decreases the taming time when fed to the doed. 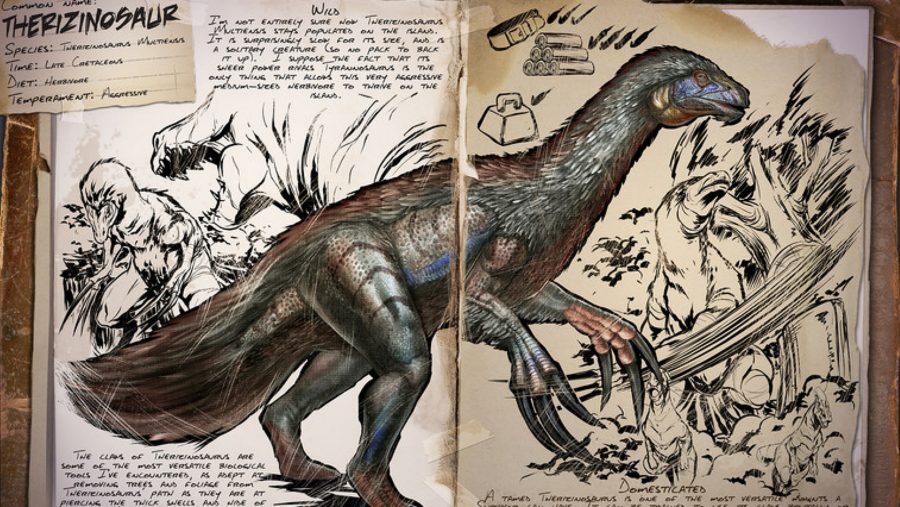 The next entry will be familiar to pretty much everyone who has played Ark: Survival Evolved. The therizinosaurus is one of the most dangerous animals you will encounter early on in the game, haunting The Island’s beaches.

Guides to help you become Joan of Ark:

It is an incredibly capable creature as you will find out when it is tamed. You can use it to collect berries, hide, wood, thatch, and meat in abundance. Its claws also hit multiple times per attack making it a superb mount for taking into battles with you.

A few quick tips for taming: keep your distance, pack plenty of tranquilizers and narcotics, and feed it megalosaurus kibble or vegetables. 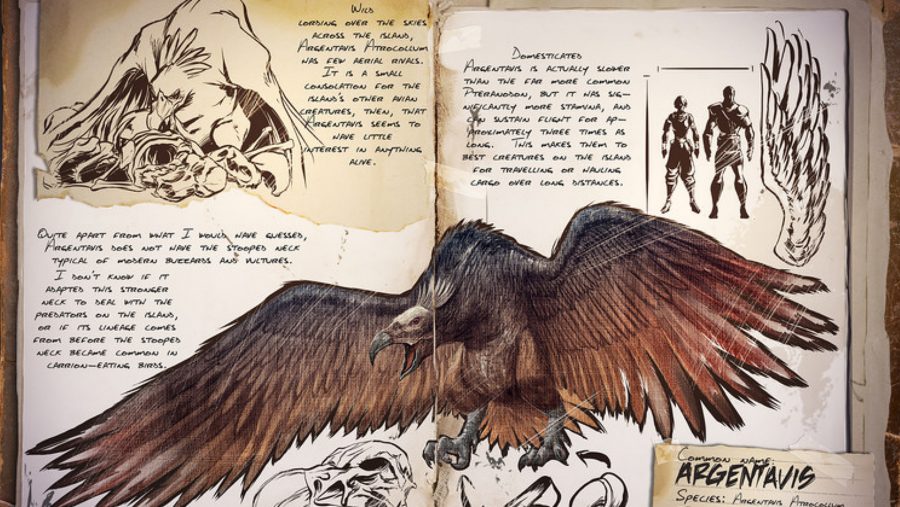 If you want to get around the map in a safer manner then an argentavis is an excellent choice. These flying mounts have higher stamina and health than the pteranodons, and have far better damage output, more than making up for their lack of speed.

They can also carry smaller animals, allowing you to move unconscious creatures to a better taming spot. In short, they make your travels back and forth across the Ark a whole lot easier.

Its preferred taming food is stegosaurus kibble or raw mutton. You can also knock it out by aiming for its head with projectiles or setting bear or chain bola traps. If you are struggling to find an argentavis, they are incredibly common around Far’s Peak, up near the north-east corner of the map. 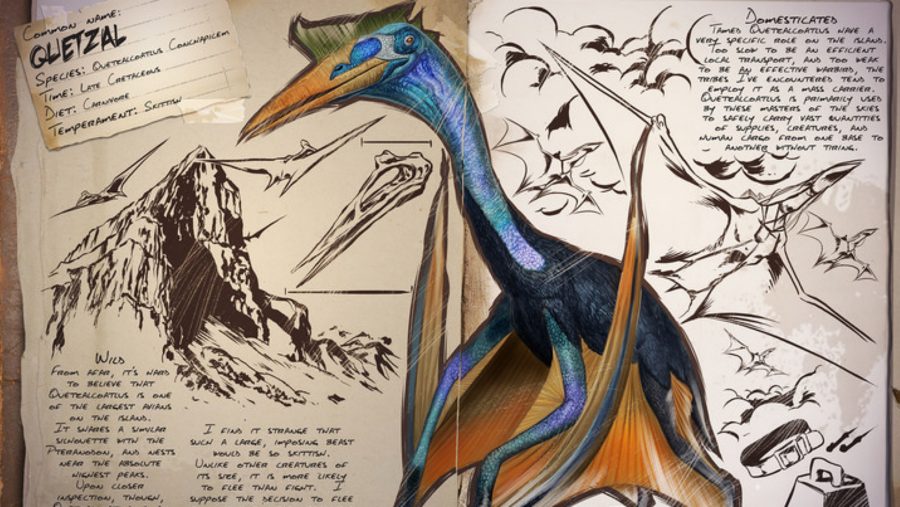 The quetzal is another flying mount worth taming. If you have a platform saddle, you can transform it into a flying base, arming it with turrets and taking resources to wherever you go.

The quetzal is also able to transport farming animals across the map, like the ankylosaurus and doedicurus, which the argentavis cannot. This makes it perfect for bringing on mining adventures. Just build a few forges on its back and you will have your very own portable smeltery.

Its only real downside is that it is spectacularly difficult to tame, as it never stops flying. You either need to use a flying mount to keep up with it and then shoot at it from the ground, or use a tapejara and shoot tranqs from the passenger seat.

Once down, it will need t-rex kibble or raw mutton. Remember to pack one of these as, otherwise, all your hard work will be in vain. 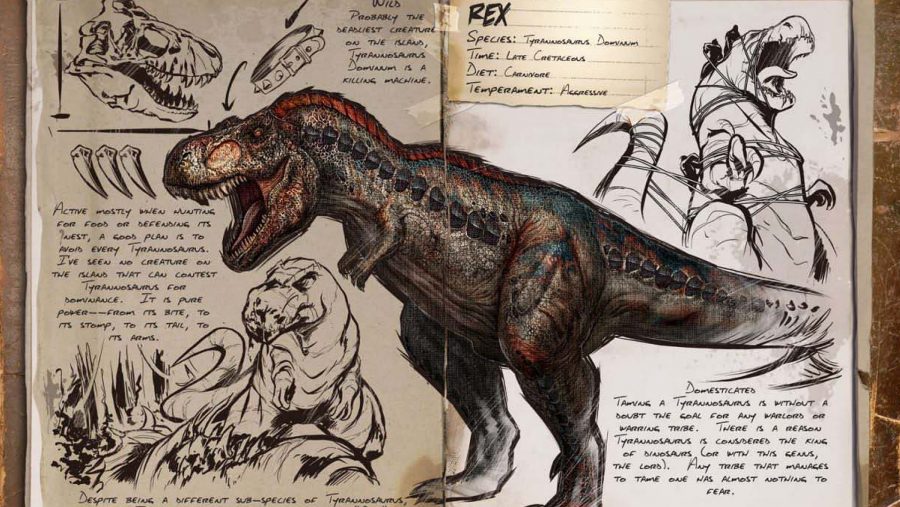 There are several big predators in Ark: Survival Evolved, but the t-rex is arguably the best. Why? Because it is one of the most dominant creatures on the island.

The t-rex has a tremendous amount of stamina and health when compared to other predators. It can also be taken into all boss arenas, unlike the giga.

Explore away: Check out these open-world games next

A good method of taming a t-rex is to build a platform to shoot tranquilizer darts from, or find a ridge nearby. Stay out of reach, and then, when you get it down to the floor, start feeding it pulmonoscorpius kibble or raw mutton. 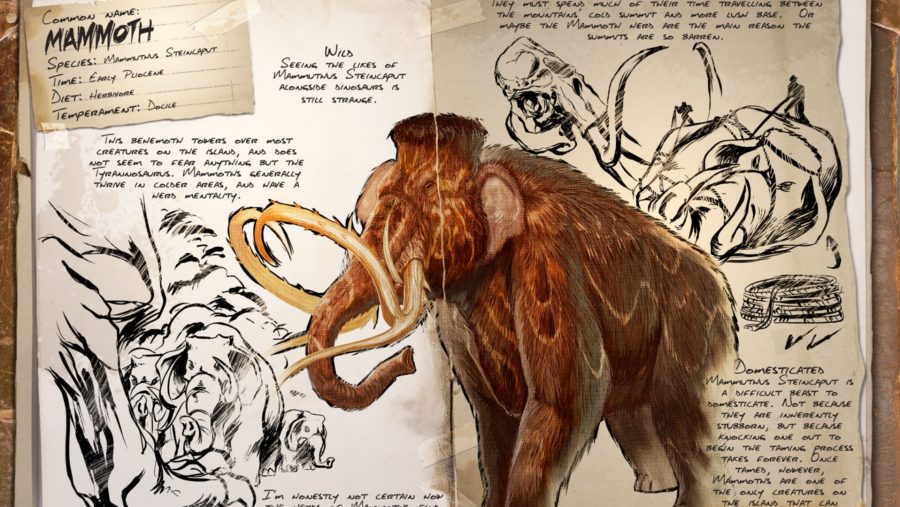 The mammoth gets a place on this list for being one of the best animals in the game for gathering wood. Found in the snowy north of The Island, it is surrounded by many dangerous animals, so taming can be a real problem. Nevertheless, it is worth the risk. Not only for the mammoth’s harvesting skills, but also for its ability to absorb lots of damage. It is a great tank, being significantly faster, and more portable, than the brontosaurus or diplodocus.

To tame a mammoth, you will need vegetables or raptor kibble, and tranquilizer darts. 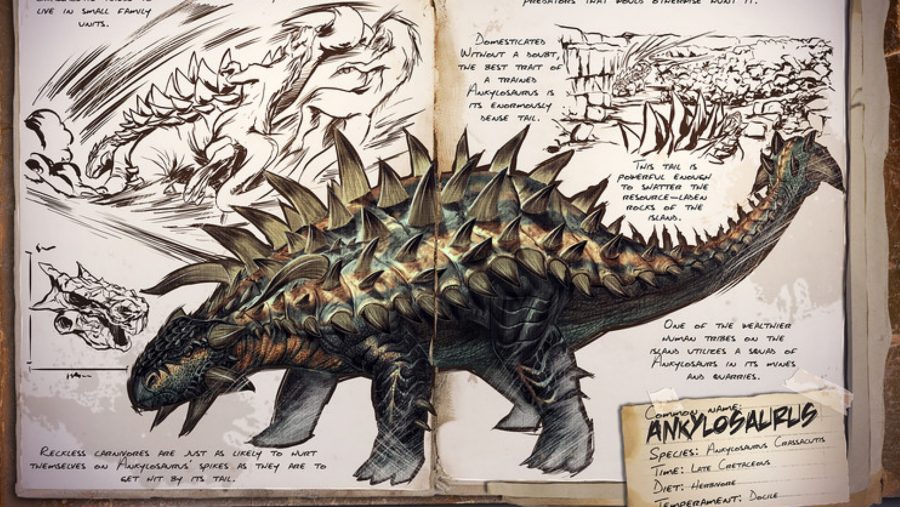 A spiky dino with a club for a tail, the ankylosaurus is capable of gathering lots of metal, crystal, and flint, making it invaluable for mining. It is also extremely easy to tame due to its sluggish pace.

All you need is dilophosaur kibble for food, and a means of knocking it out like a slingshot, tranq arrows, or tranq darts. If successful, you will soon find collecting ore far less of a chore. 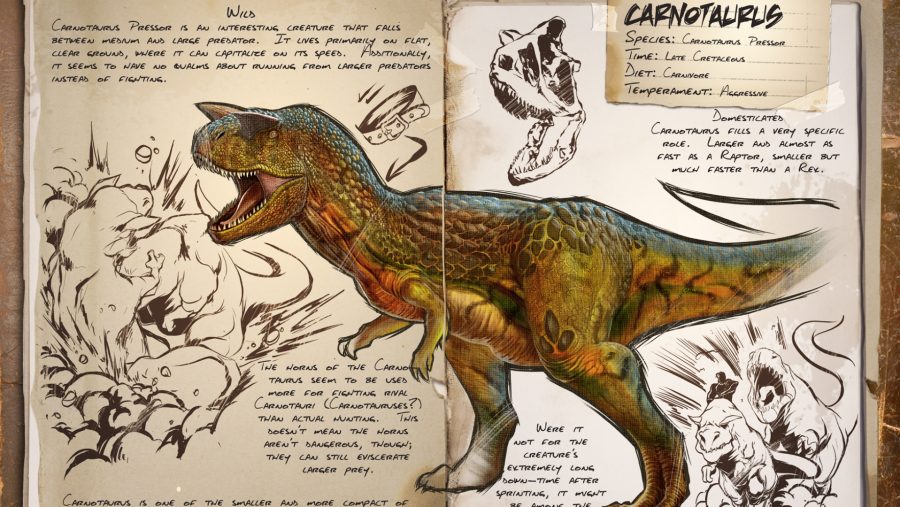 A great mid-range predator, the carnotaurus is fast and inflicts significantly more damage than a raptor. It also yields a substantial amount of prime meat, so you can use it for collecting food for your other tames if necessary. They are most commonly found on the Dead Island, but you may also find them around the Northeast Shores and Redwood Forest.

It is tamed with ankylosaurus kibble and can be knocked out quite easily using tranq arrows. Just make sure you are in a safe spot, as they can quickly overwhelm you in the wild if you are not careful. 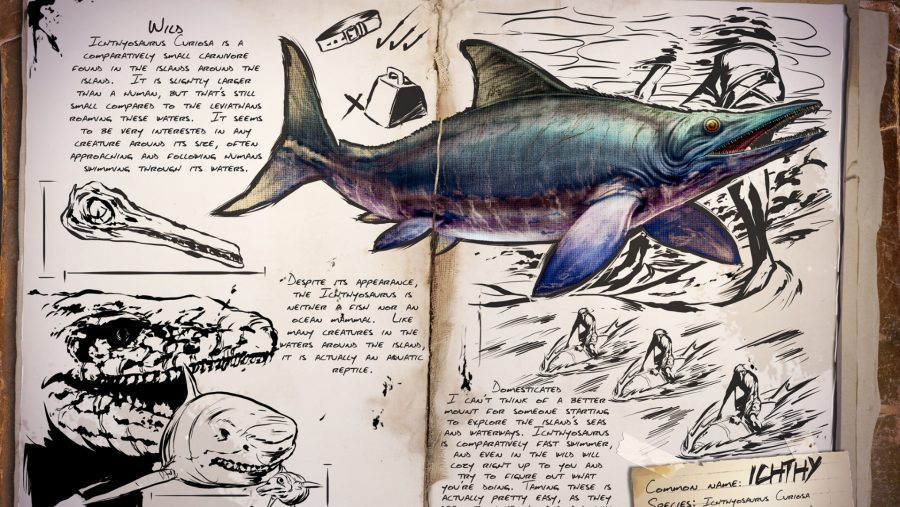 A lot of players tend to go for the megalodon over the ichthyosaurus, as the former is much more formidable in the water. However, we have decided to be different and have gone for the latter due to its remarkable speed.

The ichthyosaurus is exceptionally fast in the water, allowing it to escape most underwater predators unscathed. It can also take you to the bottom of the ocean and back in mere seconds, meaning it is a superb pearl farmer.

If all that wasn’t good enough, you can also tame it pretty simply. Just put some dodo kibble in the last slot on your hotbar and feed it from there. You should have one tamed in no time at all. 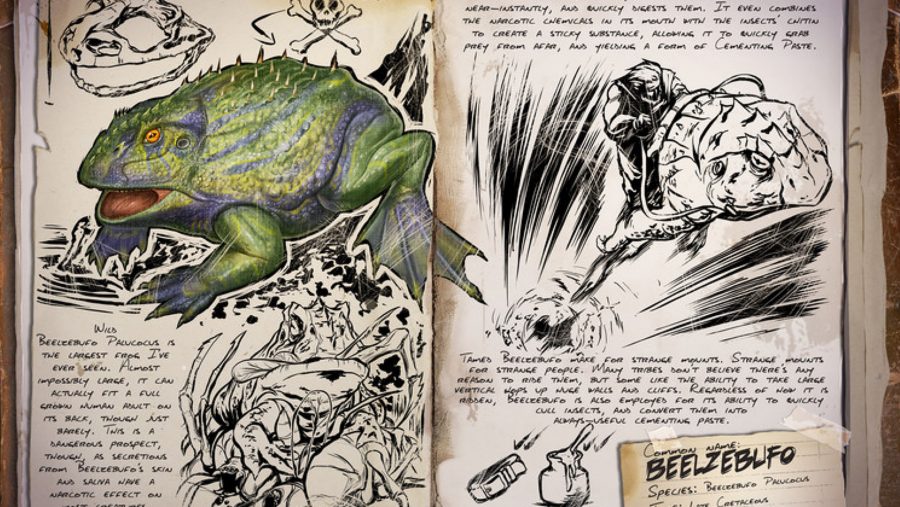 The last creature we are going to recommend is the beelzebufo – a large amphibian that is native to the swamp biome. This animal is useful as a taming mount, due to its ability to torpor prey, and as a means of transport because of its hopping skill.

It is also one of the best animals at farming the large quantities of cementing paste and chitin necessary to upgrade your base to metal. It is handy to have around.

While taming you will want to target the beelzebufo from a distance. Try to find a rock to get some height, then pummel it with tranq arrows until it passes out. Feed it either pulmonoscorpius kibble or raw mutton and you should be able to tame it relatively quickly. Good luck!

And there you go, there’s your Ark taming guide to ensure that you’re a master of survival. Speaking of staying alive, check out the other best survival games on PC. And now, with a legion of massive beasties under your control, let us just say how, err, lovely you’re looking today.