The vast fictional Greek islands of Altis and Stratis are rife with war. Blackened husks of ATVs perch over ditches, the victims of mines; helicopters pepper picturesque hillsides with bullets, hunting down fleeing soldiers; and even amid the gently bobbing waves of the ocean there is no escape from the conflict, as troops in scuba gear assault patrol vessels and pester fish.

Arma 3 has launched, and with it, a never-ending supply of battles. But this is a launch with a caveat: it’s not finished yet. In fact, if you’re one of the many players who have been fiddling around with Bohemia Interactive’s military simulator for the last six months, you might get the feeling that this is just a rather large update rather than the culmination of Bohemia Interactive and their army of testers’ work.

Kinks still need to be worked out, and a lot of content is waiting in the wings, so we’re not ready to review or score it. There isn’t even a single-player campaign yet – for that, we’ll have to wait a month, and that’s just for the first episode. But Arma 3 is much more than a game; it’s a sandbox and a creation tool, a stage for mutliplayer battles and user-generated scenarios, and even in its not-quite-ready state, it’s a compelling romp.

With Arma 3 leaving beta behind, one of the most notable differences is the inclusion of all the Showcases. These are bite-sized scenarios that teach and, obviously, showcase the various mechanics and situations that hard-working digital soldiers will find themselves in. The first new Showcase I jump into upon downloading the release version is Armed Assault, which shines a spotlight on large-scale combined arms gameplay.

It’s a varied scenario, starting with an assault on an enemy camp from long range, moving on to sabotage, commanding a squad, capturing a roadblock and finally clearing mines from the road to ensure the continued advance of supply vehicles. Using the ultra graphics preset with FSAA x 8, I get a stable fps of 50 on my rig (Intel i5-3570K @3.40 GHz, 8 GB of RAM, GeForce GTX 670, and Windows 7 64-bit), turning off FSAA it jumps up to 60. This fluctuates depending on the scenario’s content, however. 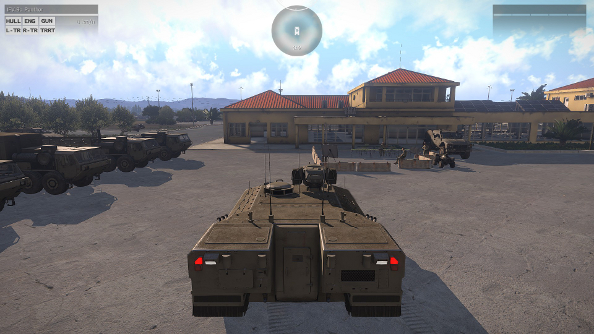 The Armed Assault mission finished, I try out the new UAV Showcase, but after 15 minutes I promptly pack it in. Whenever you’re doing something new in a Showcase, a hint pops up explaining the mechanics or controls of whatever feature you’re playing around with. Unfortunately, when I hook up my UAV and start to control it, I find myself unable to activate the hint, and even after switching to the normal view, the hint refuses to return.

I eventually get the blasted thing to its target, but at this point, I once again find myself stumped. I bugger around with the laser marker, attempting to highlight the AA gun I had been sent to destroy, but to no avail. Then I receive a message explaining that something had been destroyed, and when I leave the UAV mode and return to looking through the eyes of my soldier, I realise that I’m injured, everyone is dead and a vehicle has been blown up. Thanks for the heads up, guys.

Along with the 12 single-player Showcases, there are three faction Showcases and 10 Firing Drill Challenges. The former is essentially a playground, bases filled with vehicles and weapons just waiting to be experimented with, while the latter is where players can test and hone their movement and firing skills, challenging themselves across 10 different scenarios.

All of these Showcases and challenges amount to a huge tutorial, which is almost certainly needed, since Arma 3 is a complicated beast. Even the simple act of moving requires practice, experimentation and quite likely a spot of key rebinding. The payoff is freedom of movement and a depth of control that no other game can really claim to match. 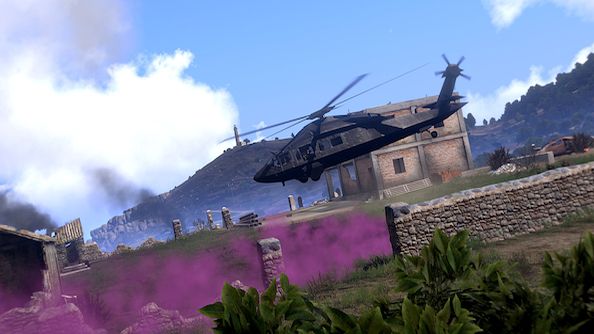 Take stances, for instance. There are three default stances: standing, crouched and prone. That’s already one more stance than most shooters have, but between these stances are adjusted variations.

I’m assaulting a small village. It’s filled with enemy troops, but my squad has it surrounded. I’m on a ridge to the south, below me and to the west is one of my squadmates and hugging the trees to the east is the final member of our squad. Being the commander, I sent them to their positions by faffing about with the somewhat obtuse command menu where I can define their formation, what vehicles they use and what position they occupy in said vehicle, their behaviour (stealthy, aggressive and so on), and deal with their injuries or lack of ammo. There are a lot of numbers, keys and orders to learn – though a Showcase explains much of this.

My position is solid, but there’s a problem: my cover is the wrong height. Crouched, I can see over the wall, and if I stand, then I’ll be an easy target for the enemy forces below. This is where stance adjustments come into play. Each stance has three stages associated with it: high, medium and low. By switching to a high crouch, I’m able to see over my cover, and I begin to assault the village.

The village seems to be clear, but the plethora of buildings and cover could be hiding any number of cowardly enemies. I decide to make my way down the hill to inspect the now silent area. Just like stances, there are a lot of options available when moving to a new position. I can sprint, though this drains my stamina, leaving my vision blurred and my aim shaky. I can walk slowly, moving my head around to keep an eye on my flanks while keeping my gun forward. Or I can run, both normally, with my gun down, or tactically, with my gun up, ready to fire at a moment’s notice or charge into the quiet, sun-dappled woods, searching for natural camouflage. 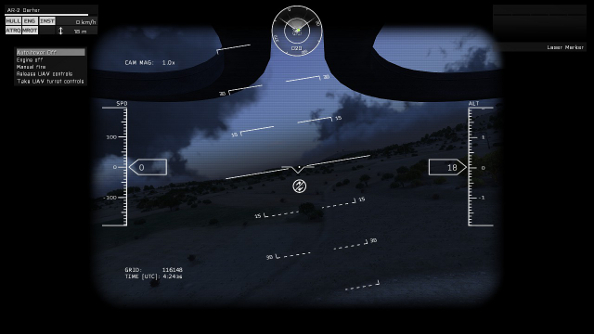 This complexity and depth extends to every aspect of Arma 3, from the nuances of firing a gun, with the variety of sights, different shooting positions and realistic crosshairs, to reading the environment, deciding what makes the best cover or camouflage, or where foes could be lying in wait. Simply moving a few hundreds yards through the diverse landscape, the lush forests, mountainous regions hiding any number of snipers, pristine beaches and arid plains, becomes a puzzle and a lesson in the importance of foresight.

Arma 3 is undeniably a looker, with subtle but impressive lighting, rich, realistic flora and detailed environments. But it doesn’t have a lot of character, with the focus being on realism rather than artistry. Wandering into a building to grab some AA gear during the scuba Showcase – which has been around since alpha – I might have been walking into a movie set after filming had long since finished. Walls, stairs, windows – it was more like a functional approximation of what a building ought to look like. It served its purpose as a solid piece of cover and, with roof access, a handy spot of high ground, but nothing more.

That isn’t to say there isn’t some beauty amid its workmanlike appearance. At night, especially, Arma 3 can look downright gorgeous, as colourful tracers streak through the air and flares light up the darkness. The textures, too, are impressive. As I stared at my new gunship during an aerial mission, it was hard to believe I wasn’t looking at a photograph of a chopper. In the hands of the community, these tools – the fantastic lighting, the myriad of vehicles, guns and buildings — can be used to even greater effect by employing them in custom maps or altering them completely, to create something new and, sometimes, something very weird. 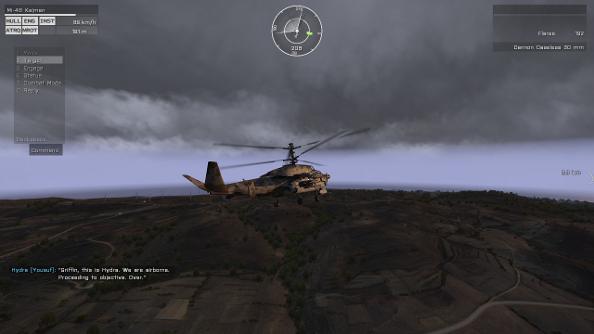 There’s already a substantial amount of custom content, from the silly, like Payday and Wolfenstein homages, and I’m sure I saw the moon from Majora’s Mask somewhere, to refined military encounters for both single-player and multiplayer. There are currently 1,865 entries on the Steam Workshop, and no doubt that will rapidly increase now that the game has officially launched.

If you’re looking for some multiplayer fun, you won’t be hard pressed to find some. Servers run the gamut from roleplaying sandboxes to co-op missions, employing custom mods, user-edited maps of Stratis and Altis, and pre-made scenarios with several objectives like seizing areas or defending bases from an assault.

Multiplayer hasn’t really been affected much by launch at this point. New additions included in the latest update will have to be added server side, so custom servers are pretty much the same as they were during beta. The lack of limitations on what can be created means that there’s no real quality control in multiplayer beyond the missions and maps designed by Bohemia Interactive. Some run smooth as butter, while others are jittering, broken messes filled with crap that will drop your fps down to abysmal numbers.

As a toolkit for creating custom content and huge multiplayer maps populated by continually warring factions, Arma 3 is great. But going into it today compared with last week, when it was still – for those without review codes – in beta, reveals only slight differences. It won’t be until the community reacts to and works with the new additions in multiplayer and the user-generated side of things or until Bohemia Interactive finishes the single-player campaign, offering new players a way to dip their toes into the game, that it will really feel like it has been released.