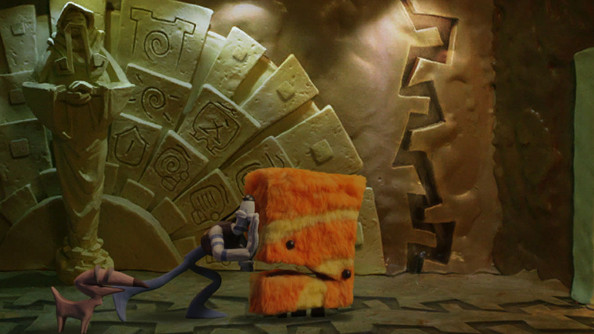 “There’s a magical thing that happens when you take an inanimate object like a puppet or clay and make it come alive through animation,” explained Ed Schofield.

That magic is what motivated Schofield and his team at Pencil Test studios to make Armikrog, an upcoming adventure game that follows in the footsteps of their earlier cult-classic, 1996’s The Neverhood. It was a game that never quite broke through to become a hit in the 90s, and there was never a sequel, but now, thanks to Kickstarter and the digital marketplace, its successor might just find a home.

“After the Neverhood [the company was also called Neverhood, after its signature game] closed up shop in late 1999, [artist Mike Dietz] and I continued to work together at different game studios, finally deciding in 2009 to start our own company,” Schofield said.

Dietz and Schofield did a wide variety of art and animation work across a multitude of projects, but nothing ever topped their experience making Neverhood.

“The whole genesis of the project came from a discussion that Mike and I had where we were talking about the most fun we’d ever had making a game. The process of physically building sets and creating stop motion animation on the Neverhood was so unique that this experience stood head and shoulders above the rest,” Schofield said.

But the opportunity had never materialized to do another one, until crowdfunding appeared on the scene.

“For years Neverhood fans have been asking for a sequel, but the rights to the property are owned by EA and they aren’t interested in doing anything more with it right now. Kickstarter was our way of testing the waters to see if there was enough interest from fans to create another stop-motion game,” he said. “We’re happy that the public answered with a resounding YES, because if we had not hit our Kickstarter goal, we would have moved on to some other project.”

They quickly reached out to members of the old Neverhood team, including Doug TenNapel (whose involvement caused some controversy) and composer Terry S. Taylor.

They were also surprised to start hearing from a huge contingent of Eastern European Neverhood fans, who made a strong showing during the Kickstarter.

“Social media has made it a lot easier to connect with Neverhood fans in recent years, and we’ve had a chance to hear from a lot of Eastern European fans,” Schofield explained. “Quite a few people have told us that the Neverhood was one of the most pirated games in Russia in the mid 90’s. …We [had] backers from Russia saying that they felt good about financially supporting Armikrog as it was their [payback] for playing pirated versions of the Neverhood when they were younger. As far as its popularity goes, Eastern Europe has a rich history of stop motion animation which may have set a good tone for the Neverhood’s acceptance.”

Neverhood may not have found quite the same level of acceptance in the United States, but Schofield bristles when people call the game a commercial failure.

“I think there’s some misinformation out there on the web that has exaggerated this idea of the Neverhood being an under-performer,” he said. “The game sold almost 80,000 of the one-and-only run of boxed editions. Some may not consider this to be very successful, but we also had a deal with Gateway computers where the Neverhood was pre-installed on over half a million desktops, exposing the game to a lot of people that may not have experienced it otherwise. You always hope for that blockbuster hit, but overall we were pleased with how the game sold.” 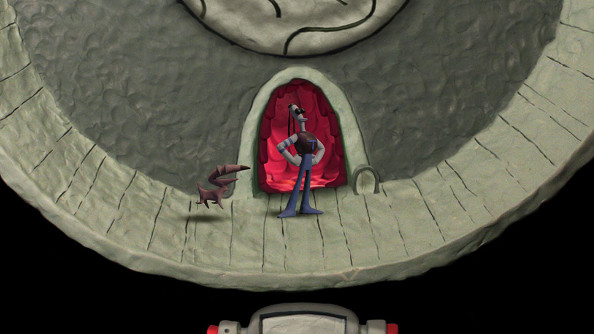 “Claymation” is not quite as popular as it used to be. The children’s specials and animated shorts that players of the 90s grew up on have largely vanished in favor of glossy, CG-animation. I asked Schofield whether he worries that his chosen medium is itself an anachronism.

He doesn’t thinks so. “The unique look of the clay and puppet animation, along with the hand crafted environments are what give Armikrog its charm and make it stand out from most other games. …We don’t feel like we’re competing against other games as much as we’re competing against ourselves as artists,” he said. “Our goal on this project has been to create playable art–art that is both beautiful to look at, but also serves in its functionality as an entertaining puzzle-adventure game.”

But really, Schofield and his team are just happy to be working in their favorite medium again. “There’s a magical thing that happens when you take an inanimate object like a puppet or clay and make it come alive through animation. To us, moving and photographing a character 30 times for one second of animation isn’t tedious–it’s this incredible process of bringing an object to life, giving it attitude and personality. It’s this experience that drives us to continue to animate and create–and we hope that this passion shows through in our work.”