What is the best MOBA? The title of ‘best MOBA game’ is a hotly contested one, and often reduced to two warring champions: League of Legends and Dota 2. But, despite being the most popular in the genre, these two games may not necessarily be the best MOBA for you.

MOBAs have been around for a long time – the genre was originally born from player-made custom games. The first MOBA was a Starcraft custom map called Aeon of Strife, which then inspired the incredibly popular Warcraft III custom game Defense of the Ancients. Modders from the original DotA went on to create Riot’s League of Legends, and Valve’s Dota 2, bringing MOBA gameplay to even wider audiences. Thanks to the format’s depth of gameplay and astronomical skill ceiling, MOBAs are some of the biggest esports games around, with hefty prizes to boot; Dota 2’s TI10 tournament had a prize pool of $40,018,195. Whew.

So, if you’re looking to take your first, wobbly steps into the MOBA genre, you may be wondering which MOBA will be the best fit – here’s the lowdown on the biggest MOBAs around to give you a headstart. You’ll be defending the legends of the smiting storm in no time. Or something like that.

So, what does the term ‘MOBA’ actually mean, we hear you cry? MOBA stands for Multiplayer Online Battle Arena. If – for obvious reasons – that doesn’t actually make things any clearer, here’s a more thorough explanation: a MOBA is a team-based multiplayer strategy game, where each player controls a single powerful unit that accumulates resources and increases in strength throughout the match. Each team starts on opposite sides of the map, and the goal is to destroy the opposing team’s buildings, culminating in the destruction of the enemy’s main building, which wins them the game. Easy peasy.

Typically, the MOBA map is divided into three separate lanes – top, middle, and bottom – and at regular intervals, squads of little computer-controlled units, allied to each team, spawn in each of the three lanes, and then march towards each other waving their little swords around. Killing these minions – as well as killing enemy players, and neutral minions hanging out in the space between lanes, otherwise known as the jungle – gives you gold and experience, which is how you get more powerful and eventually demolish the other team’s base.

The best MOBA games are: 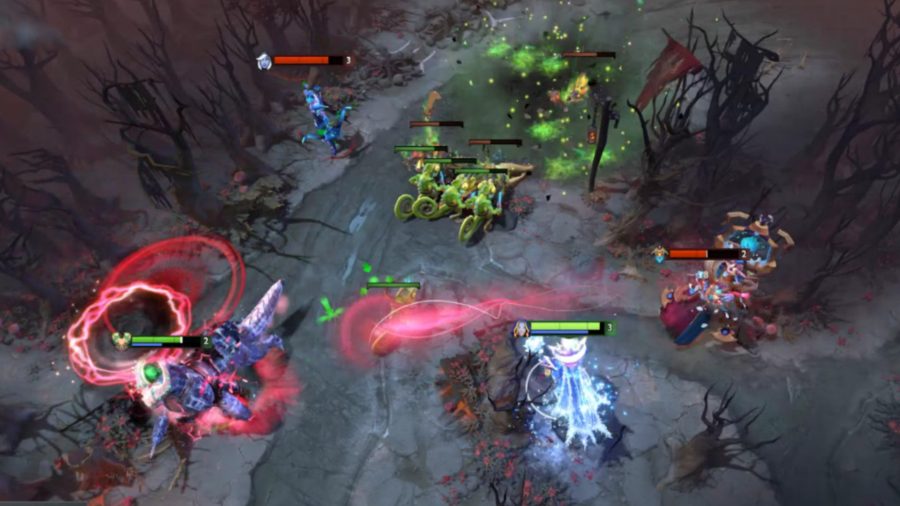 Dota 2 is Valve’s official sequel to the Warcraft III mod Defence of the Ancients, and is the brainchild of developer Icefrog, one of the original WC3 modders. It may be one of the most popular multiplayer games, but it doesn’t have anywhere near as many players as League of Legends – and it’s much more difficult to master. That difficulty lends Dota 2 its own appeal, though, and the incredible displays of skill on show at The International each year earn Dota 2 pros the biggest prize pool in esports.

Dota 2 follows the same standard MOBA formula – you start by choosing one of the best Dota 2 heroes, and 5v5 battles take place on a three-lane map – but Valve have added layers of complexity. For instance, it’s possible for players to kill their own creeps (minions) in order to prevent their opponent harvesting gold, a tactic known as ‘denying’. Players can also ship items to themselves across the map using a courier instead of having to return to their base.

If you’re wondering how to play Dota 2, there are plenty of player-made resources for eager newcomers looking for a challenge, such as Purge’s Dota Basics series. Additionally, unlike LoL, all Dota 2 heroes are available to play for free, meaning you can jump right in and give all the heroes a go. 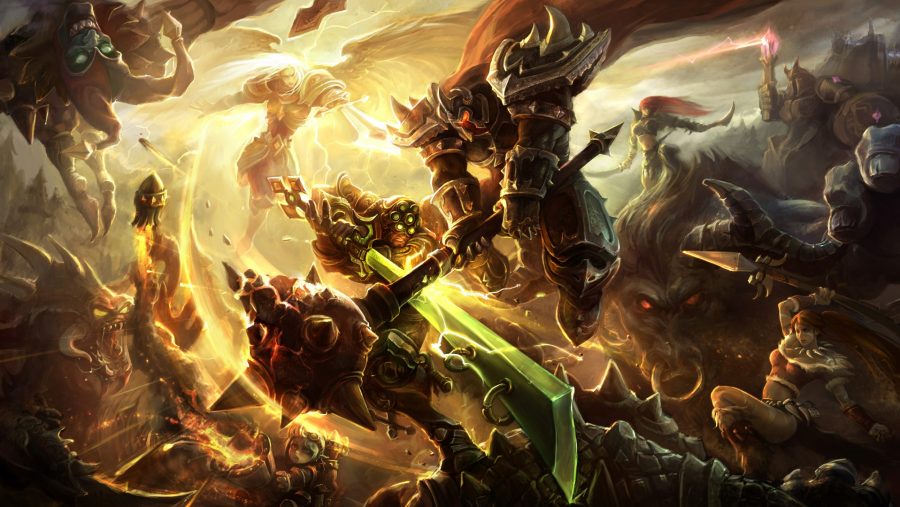 League of Legends (or LoL to its many, many friends) is the biggest MOBA around. Hundreds of millions of unique players head into Summoner’s Rift every month of the year – not only has it got the biggest esports scene of all time, it’s also got its own K-pop girl group; if that doesn’t sell it to you, we don’t know what will.

League of Legends follows the traditional MOBA blueprint, but certainly isn’t lacking depth. You’ll need to choose the best League of Legends champions from a rapidly expanding roster of over 150 playable characters, upgrade them with optimal item builds, and choose the perfect moment to take objectives that are key to victory. For most players, League of Legends strikes the perfect balance between tactical play and twitch skills for an experience in which anyone can find their niche.

It’s far easier to start playing than Dota 2, and with our guide to the best League of Legends champions for beginners, you’ll be knocking down the enemy Nexus in no time. As an added bonus, the League of Legends client also contains Teamfight Tactics, one of the best autobattlers around. 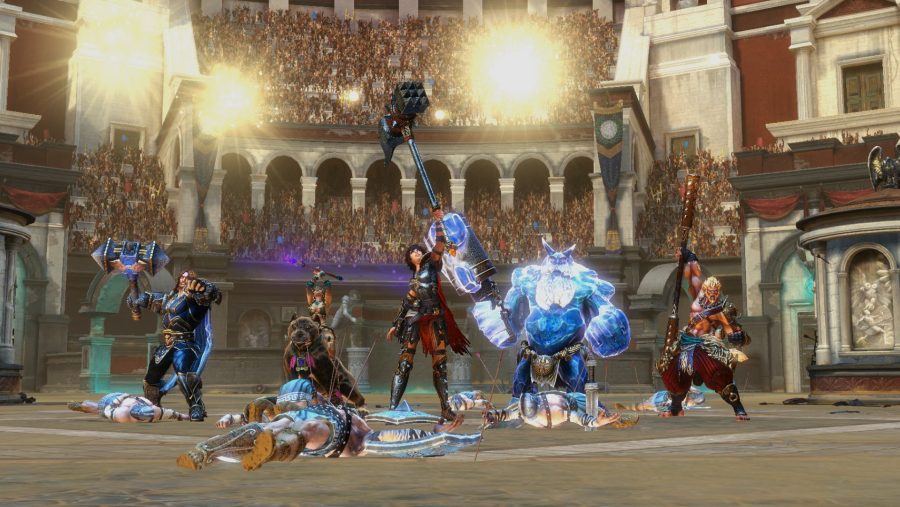 Many games in this list are influenced by ancient mythology, but Smite takes the gods of old as its direct inspiration. Each player takes on the role of one of the Smite gods and battles it out across a three-lane arena in different modes ranging from the more competitive Assault, to a laid back Arena run. Ever dreamed of a muscle-bound 1v1 between Thor and Zeus? Here’s your chance to make it happen.

Smite’s esports scene is thriving, featuring regular tournaments and a world championship at the annual Hi-Rez Expo. Despite not having the prestige of League of Legends or Dota 2, Smite still commands international recognition on the sporting stage, with massive prize pools.

Unlike its contemporaries, Smite is played from a third-person perspective rather than top-down. As a result long-range skillshots and maintaining awareness of immediate surroundings can be more challenging. Each god takes on a specific role of either Guardian, Hunter, Mage, Warrior, or Assassin and specific character abilities help make battles properly cinematic. For example, the spider goddess Arachne can crawl above her opponents to find a unique attacking angle, and Thor can launch himself far up into the sky to then crash downward with his hammer. They make for some spectacular brawls, but also require you to be patient and strategize with your team to capitalise on each god’s strength and weakness. 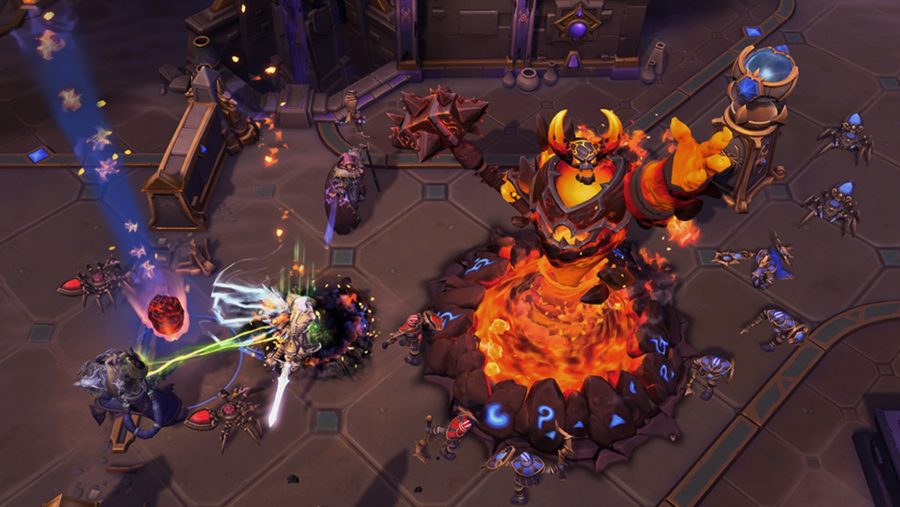 Heroes of the Storm

Defense of the Ancients was originally a Warcraft III mod, so, of course, Blizzard couldn’t resist creating their own fully-fledged MOBA. Heroes of the Storm heroes are characters plucked from across the StarCraft, Warcraft, Diablo, and Overwatch universes and dropped into an ‘all star’ mash-up – so if you fancy piloting Overwatch’s D.Va in a battle against Jaina Proudmoore, HoTS is the MOBA for you.

Unlike League of Legends and Dota 2, Heroes features no items. Instead, players choose upgrades to their abilities as they level up, allowing them to focus on utility, hardiness, or damage. Each hero also features two ultimate abilities, of which only one can be activated during a single match.

Also, unlike its competition, Heroes hosts a variety of maps which feature unique objectives that can turn the tide of battle. One sees players fight for dominance of temples that fire lasers at opposing fortifications, another asks each team to collect plants that spawn a giant controllable flower monster.

Blizzard has gone to great lengths to keep the focus on combat and objectives rather than number crunching – you’ll find no one boasting about their high attack damage ratios or critical strike chance here. Games are also significantly shorter, generally clocking in at the 30-minute mark. However, what is sacrificed in depth is made up for in sheer polish. HoTS no longer has an official global championship, though, so you’ll have to look to the other MOBAs in this list if you’re looking for a robust esports scene.

Those are all the best MOBAs on offer today – time to round up your team, pick your heroes and charge down a lane in search of glory. If you’re constantly finding yourself underfarmed, try playing one of the best farming games instead – it won’t help you farm better in MOBAs, but at least your crops won’t report you at the end of the match.