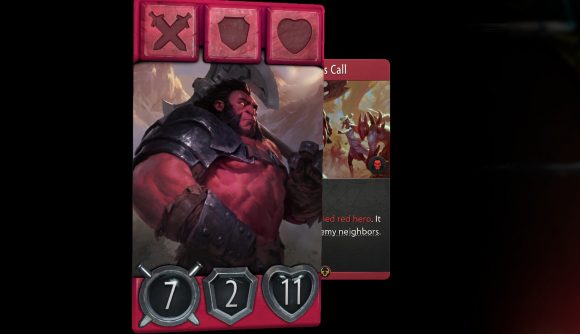 In Artifact, you can buy and sell cards on the Steam Market. That means we can immediately see which cards are most sought after with cold, hard dollars and cents, and if you want to build competitive constructed decks you’re going to have to keep up on the prices. We’re still in early days for the market and the meta, but one card is clearly standing above all the others: Axe.

Axe reached highs of around $40 dollars when the market for beta users went live ahead of launch, but prices have now settled down to around $15. This a red hero with seven attack, 11 health, and two armour. A starting armour rating is unusual for most heroes, and it means Axe is nearly impossible to kill in the first handful of rounds – that makes him an essential part of most red decks, which favour heavy offense in the early stages of the game.

Popular hero cards will likely continue to be the rarest and most expensive cards in the line-up, since they’re the central pillars around which decks are built. The other most expensive cards right now include Drow Ranger, a green hero selling for about $10, and Kanna, a blue hero currently marketing for just under $8.

Those are all pretty extreme outliers, though. Every other card in the game is regularly available for under $5, and about 250 of the 280 cards in the base set can be had for less than a dollar. In fact, about half of the set is available for less than a dime, and nearly a third are currently set for the absolute rock-bottom price that the Steam market will allow. Prices have generally been coming down since launch, though that may change if specific builds come to dominate the meta.

The most popular decks on tracking site ArtifactFire tend to top out around $30 for the set, and those are decks that include expensive cards like Axe. That’s not nothing, but it’s better than the cost associated with a lot of digital card games – especially since you can resell your cards at any time to spend that money on others. (Or on other Steam games, if you give up on Artifact.)

But Artifact’s monetisation strategy remains a prickly point for players, and early user reviews have given the game a ‘mixed’ rating on Steam as many express concerns over constructed modes being a pay-to-win affair.

You can check out our Artifact guide and a list of Artifact cards to help you plan your strategies. Even if you don’t want to dig into the Steam Market, those guides will help you get a leg up in Artifact’s free modes.