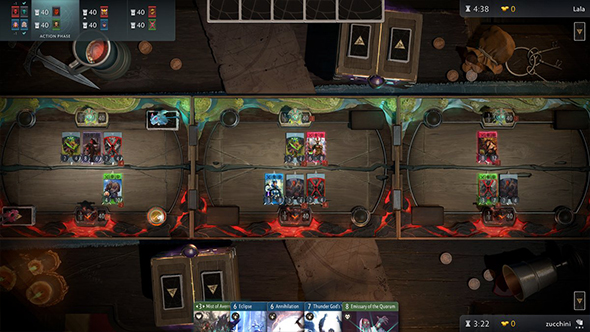 Valve have begun to officially reveal Artifact to the press at a meeting today, but it seems Geoff Keighley got an even earlier look at the game and has Tweeted out some details about what to expect from the game.

Keep up with the details with everything we know about Artifact. Expect more updates soon.

Artifact will feature 280 cards and 44 heroes. Matches will require you to take down towers in two out of three lanes, each of which has its own board. The three lane structure is similar to Dota’s, though obviously the details are quite different in a card game.

Here are some of the first images of Artifact – a collaboration with Magic creator Richard Garfield and set in DOTA universe. 280 cards, 44 heroes, “three lanes” of gameplay and some adorable imps. pic.twitter.com/z1YIdlC4wA

You can see more screenshots of the game here, including a more detailed look at what the hero and item cards look like. Artifact will not be free-to-play, but Valve’s plans on how to monetize the game are still a bit murky.