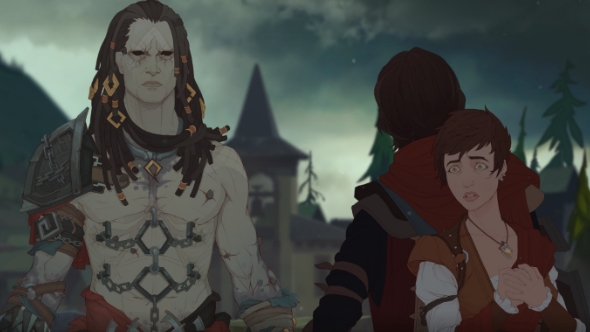 Some of the greatest games ever made are the result of imitation and the borrowing of ideas. Take a look at The Legend of Zelda: Breath of the Wild, which sees Nintendo build upon and refine the ideas they picked from other games for their open world. But if you lift someone else’s formula and neglect to inject some originality into it the effort can easily backfire. That seems to be the case with indie developers AurumDust and their replica of Stoic’s strategic RPG The Banner Saga. 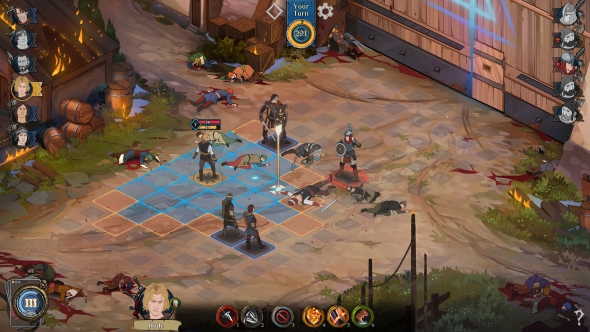 In its best moments Ash of Gods is great simply because The Banner Saga is great. This is a stunning imitation and so it, too, is beautiful throughout, be that in its detailed static scenes or the nostalgia-inducing animation that pays homage to the likes of Fire and Ice, Wizards, and the animated The Lord of the Rings film. The combat, devoid of cover mechanics or other complexities, hones in on the importance of positioning and lining up character turns in the correct order. It also features a neat dual hit point system, in which you opt to either damage an enemy’s stamina to prevent them from performing strong attacks, or target vitality for straight-up wounds. It is almost a facsimile of The Banner Saga’s own dual system of armour and health, but works well enough to make battle a /slightly/ different spin on an already successful design.

Combat may be enjoyable, but outside of tactical moments, Ash of Gods comes across as a pale imitation of its inspiration. The quality of writing bounces between generic and cringeworthy, and fails to craft a tale – at least in its opening – that feels worth hanging on to. Aiming for dark melancholy, the script mostly lands on fumbled sentiment and excruciating exposition. When visiting the local store, the merchant’s dialogue crowbars unrequired details from the past three years of your protagonist’s unseen life into a single, painfully unnatural exchange: “It’s been three years, my dear Thorn. We’ve run into each other now and then… but ever since you arrived in town – freshly retired – and bought a silver necklace with a garnet, you’ve forgotten all about my shop”. Several sequences later a character sobs into the corpse of her murdered “mommy,” begging her to “get up and stop pretending!,” despite previous scenes having established this character as a capable soldier and not a six-year-old child. 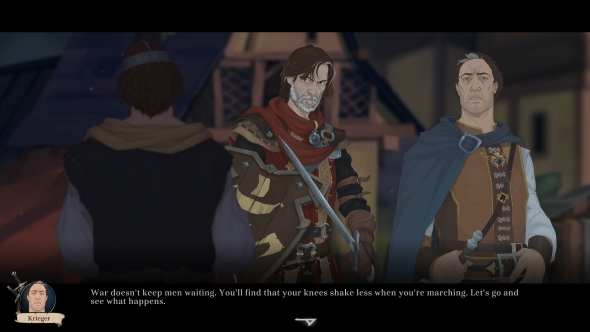 Many awkward elements of the dialogue are almost certainly the result of author Sergey Malitsky’s script being less-than-perfectly translated from Russian to English. But even making allowances for that doesn’t prevent the story from feeling rough and poorly directed. The heavy exposition and unnatural speech appear to be concessions in exchange for packing in as much background lore as possible, establishing the universe and characters. Personally, I would have opted for slower reveals and a more poetic approach to the characters, especially considering the literary ambitions of its story-driven structure.

AurumDust are clearly chasing fans of The Banner Saga with Ash of Gods: Redemption, and the level of which they have paid respect to their influence will lead to two possible eventualities: those looking for more of the same dour, beautifully-drawn adventures will find themselves catered for; or staunch supporters of Stoic will strike out at a title looking to ride on their beloved game’s coattails. I find myself feeling cynical about the game’s intentions – rather than building on admired ideas, Ash of Gods’s creators appear content to make do with replicating them. Perhaps this imitation is flattery, but on this early showing it is hard not to see it as another studio making claims on someone else’s success.