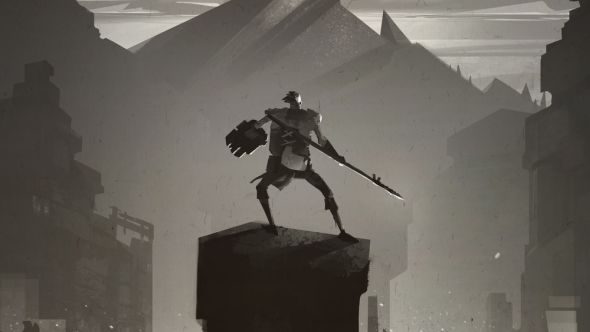 Ashen looked a little bit Dark Souls in its presentation at Microsoft’s conference. Surprise: it is, but the part developers Aurora44 are focusing on is the need for jolly co-operation in its wasteland, both with other players and NPCs.

All the upcoming PC games you could possibly want, right here.

“We have an open world world with passive multiplayer systems. People can drop in, drop out – it’s mostly about co-operation and helping people,” says animation director Simon Dansen. He also makes it clear that there isn’t going to be a pop-up when you’re with another player – like Journey, they’ll show up and you’ll have to figure it out from there.

Beyond the other player elements, there’s also a central town where NPCs you save will return. “You’re building up your town, bringing NPCs back into your town and unlocking new stories that way.

“As you bring NPCs back, they start settling in your town and as you do more and more quests with them their house builds up over time. You unlock new stories and new outfits from them.”

Even this is reminiscent of FromSoft’s series – it’s similar to how each Dark Souls game has been built around a hub filled with an expanding cast of characters. Plus, you probably can’t accidentally land on and then kill them here.

We’ll have more from Ashen in the next few days.