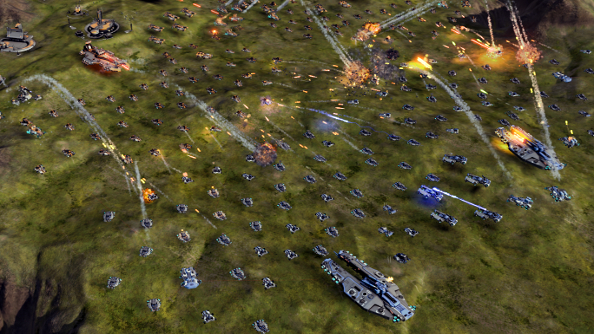 Ashes of the Singularity, Stardock and Oxide Games’ gargantuan RTS, immediately impresses with its scope. When Stardock CEO Brad Wardell showed the game off for the first time at GDC, that was very much the focus of the demo. This is a huge game, with a huge number of units all acting independently. And yes, it’s a game where a unit flying across its largest map will be on that journey for an hour.

The promise made by Oxide and Stardock is attention grabbing, but I wanted to find out where the game was under all of the tech and scale, and how Ashes can make a splash in a genre dominated by very few games, where most struggle to gain traction. After speaking with Wardell earlier this week, I’m a bit more reassured.

Ashes is an RTS in the vein of Total Annihilation and Supreme Commander, where intimidating sci-fi armies collide in combined arms conflict. Wardell also notes some similarities with Company of Heroes, with its capture points, and like CoH, it’s more about strategy than actions per minute. It’s big, massive really, and not just because it can be, thanks to DX12 and the likes of Mantle and Vulkan.

“What we want to do with the game is give the player an opportunity to play a game where you feel like you really are fighting across an entire planet,” Wardell tells me. “At GDC, we wanted to be able to show an engine that makes it clear to the player that you’re battling for control of a planet. It’s not a tactics or squad-based game, you’re dealing with potentially thousands of units.” 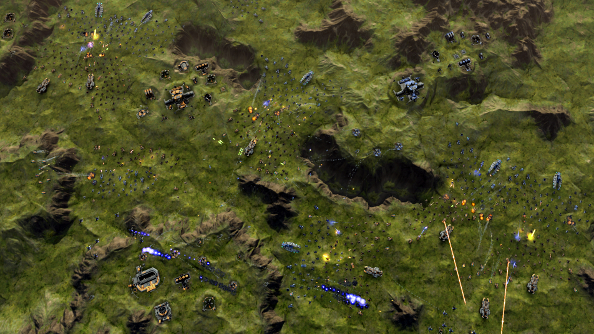 The scale informs the strategy. While a match on a small map can be completed in 30 minutes, it’s a game where resources are spread out all across the battlefield, and players have to go out and actively attempt to control the area, not just a single base.

“A big part of the game is you’re researching tech to improve the units that you have available, you’re capturing resources across the map,” Wardell explains. “And you’re trying to ultimately either annihilate your opponents or to capture what we’re calling victory points right now, that if you control these key spots, you eventually win.”

At GDC, the point was to show off the capabilities of the engine and the potential of DirectX 12. But it’s not a tech demo. The tech allows Stardock and Oxide to do things that would have been previously very challenging, and what’s important are the interesting things that can be done with the engine, not just the fact that it means everything can be bigger and prettier.

That’s not to say that making a massive game that also looks lovely isn’t a goal. This is the moment where RTSs can smash through the limits that have restricted them for years, says Wardell.

“We’ve been up against that 2GB, 32bit limit – I know there’s technically 4GB, but realistically it’s 2GB – for over 10 years. Even as far back as the first Supreme Commander, it was up against that limit,” says Wardell. There always had to be a sacrifice. “People expect graphics to be improving, so what happens is that the games got smaller and smaller and smaller, so you eventually had squad-based, smaller… I mean they’re great games, but Dawn of War and Company of Heroes are a little bit smaller scale, but the graphics are much better.”

Wardell explains that Ashes pushes past those old limits, and that this allows the game to simulate so much more – without sacrificing visual flair –where each unit is an individual, and can contain multiple components that all act independently of each other. 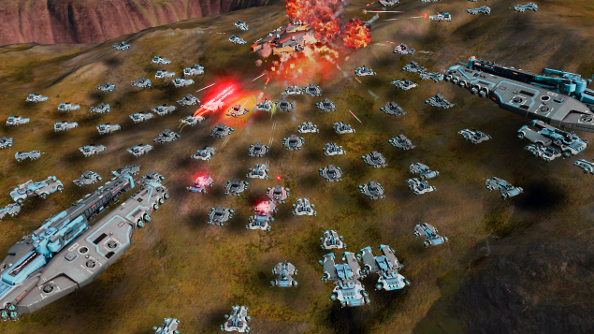 “When you load up Ashes, you’re going to be using 6GB of memory. And that’s the cost of having every unit… having all these individual units, and each unit has their own weapons system. So imagine you have a big ol’ battleship and the battleship has five cannons, two flak cannons, 2 missile turrets, and they’re all operating indepently and doing their own tracking.”

Bemoaning the memory cost of real line of sight, Wardell notes that Ashes can now employ it. That’s nothing new. The original XCOM did as well, but Wardell reckons that it ended up left by the wayside in the remake because there was a choice between making a visually compelling game or something with low-key visuals but with real line of sight. In Ashes, the developers didn’t have to choose between one or the other.

“So I can have line of sight, I can have real elevation, I don’t have to fake it. I can have mountains and plateaus and they mean something and are still pretty. And that changes you game mechanics completely.”

I remember watching the GDC demo, which featured predominantly stationary units, and I thought to myself that pathfinding was going to be a bit of a nightmare. Wardell says that’s not the case, and utilising multiple cores means that Ashes can allow players to transform groups of 100 or more units into one battle group, where they’ll act as one organism.

“Now that we have multiple cores, we can do a lot more interesting things with unit AI that we couldn’t do before. So normally in RTSs we’ve always had these challenges like pathfinding. If you think pathfinding is hard, imagine having the units intelligently work together. That’s why, in traditional RTSs, you’d have people binding control groups into these tiny squads within squads to keep them from doing stupid stuff. But now we can actually have these well-defined roles for unit AI.

“Picture this: you have, well we can them T3s, but your capital ships, and then I take my cruisers and I connect them to it and I have my frigates and I connect it to it, and there’s really neat UI stuff to make it really easy to assemble these battle divisions. So I do that, and I send them off somewhere, and they’ll work together. So if there’s a medic unit in there for healing, he’ll see if one of the guys in the team has been hurt and go and help him out. It’s not based on ‘Oh, he’s nine pixels away and I only look at eight pixels, so I guess he’s just going to die.’ So that allow us to have a lot more more units and a lot more scope to the game without the game itself bogging down.” 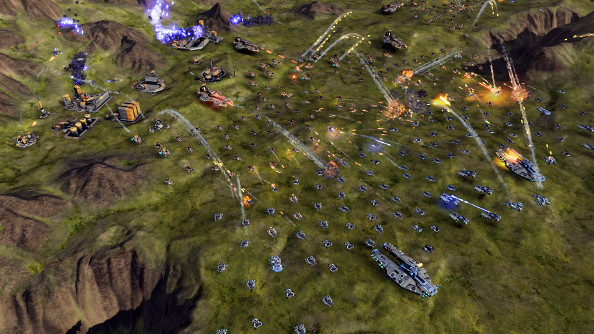 It’s not about just constructing unit after unit and sending them out to kill or be killed. Wardell says that they want players to think about how to control the resources, how to dominate regions, how to get the strategic high ground and, importantly, how all of these units work together. With that in mind, Ashes will contain around 12 or 14 units per faction, but these units will all be unique, and part of the building blocks necessary for the creation of a full fighting force.

Ashes supports 4K, and that was one of the big things that Wardell was demoing at GDC – that it can run smoothly at extremely high resolutions. But at the moment, 4K is extremely prohibitive because of its cost. And it’s not just the cost, but the fact that it’s almost useless on most games. I wondered if Stardock and Oxide were maybe going overboard, and if it was going to be wasted on the majority of players who wouldn’t be able to actually see the benefits of this or, even more worryingly, run the game at all.

While Ashes is not a tech demo, showing it off running at 4K sort of was. Wardell acknowledges that 4K has a very long way to go before it could be even close to being as common as gaming at 1920×1080. It makes for a “cool demo”, but it’s not something he expects most players to take advantage of at launch. In the office, he says, most of them play at 1080 just like most players will.

A stint in Early Access is on the cards, mainly so Oxide and Stardock can test balance in multiplayer. Ashes supports, at the moment, 1 vs 1, 2 vs 2 and free-for-all, with any mix of computer and human components.

So, when’s it coming? Wardell says that it won’t be until some of the other Early Access games have shipped. He seems ambivalent about Early Access, or at least its current state, and confesses that he really doesn’t like it when companies churn out endless Early Access games. He’d prefer it if these premium alphas and betas were not as widely seen and advertised, and it’s for the same reason as why he sees a benefit to charging people for alpha access: it means that the people who are giving feedback are committed to the game rather than people jumping into an unfinished game on a whim.

With Galactic Civilizations III entering the last leg of its journey through Early Access, we’ll likely hear more about the Ashes of the Singularity alpha soon.