You had me at “more than one faction,” Ashes of the Singularity.

Looking for more sci-fi wars? Check out our list of the best strategy games on PC.

After several months of Early Access with only the Post-Human Coalition to play with, Stardock and Oxide’s ginormous RTS now has a second contender: the Substrate. I’ve been playing around with them, as well as the new dreadnaught progression system and fancy orbital techno-wizardry, and am now ready to spill my thoughts about them on these here digital pages.

So! The Substrate. They aren’t just the faction with the prettier, sleeker vehicles, though sexy alien tech is certainly one of the side benefits of choosing to play as them. Their buildings and units work a bit differently as well, though. 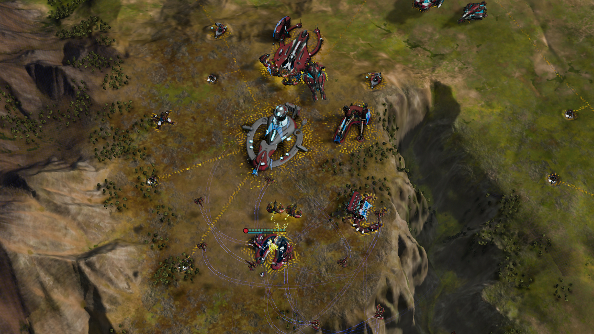 A lot of the units that the new faction fields burn through energy. When they’ve got some left in their tank, there’s nothing to worry about. They’ll keep on trucking, firing off lasers and projectiles like there’s no tomorrow, which there might not be if the PHC have anything to say about it. When they run out of energy, though, they’re in trouble. No energy means no weapons, while sort of defeats the purpose of a war machine. So while the PHC might group together a bunch of attack vehicles with some healing units, the Substrate send in capacitors instead: little energy-providing units that keep their chums topped up.

This caught me out a bit in my first match. I only had a pitiful number of capacitors, and when they were wiped out, the rest of my army found themselves stuck in enemy territory, sans weapons. They didn’t last long. It’s a bit inconvenient, but a welcome wrinkle that makes it extremely important to consider the makeup of the units you send to slaughter your enemies.

It seems like the Substrate have a slightly easier time at the start of a match, or at least a simpler one. Their factory equivalent churns out all of their units, apart from the powerful and advanced Dreadnaughts, while the PHC need to construct different types of factories before they get access to their full roster of units. There’s a little less waiting and faffing around then, and more time to construct that first army. 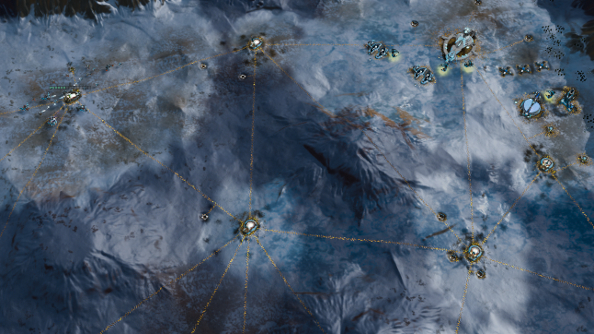 For new players, this might make the Substrate more appealing, but it does threaten to reduce the number of interesting decisions that one needs to make early on in a match. A PHC player, for example, needs to actually think about when they are going to construct a cruiser factory or when to invest in air support. It’s part of a plan; part of a strategy. However! If a Substrate player wants to build more frigates, but they also need bombers, then they still need to build a second factory so they don’t have to wait for the queue of frigates to finish.

In other parts of the game there are definitely more meaningful decisions, though. Orbitals have been expanded considerably, first in a December update and again when Ashes entered beta. Orbitals are great. Essentially, they are special abilities that can be activated once certain buildings have been constructed. While sometimes expensive, they give you more stuff to do and more things to think about.

Running low on metal? Boost a resource node with an orbital. Enemy structures not getting demolished fast enough for you? There’s an orbital for that, too. You can spawn drones, drop new units, repair vehicles – if there’s a problem or you’ve got a plan, there’s probably an orbital that will help you out, if you can afford it. Even with the cost of the building and the cost of the ability itself, orbitals are stupidly powerful and effective, so it’s a good thing there’s a counter. Orbital nullifiers can be plonked down on the map, jamming said orbitals entirely. Want to blow up a base with a giant orbital bombardment? You’re going to have to take out the nullifiers first, which I’ve noticed that the AI (and players) like to bury way back behind all of their units and guns and things that can kill. 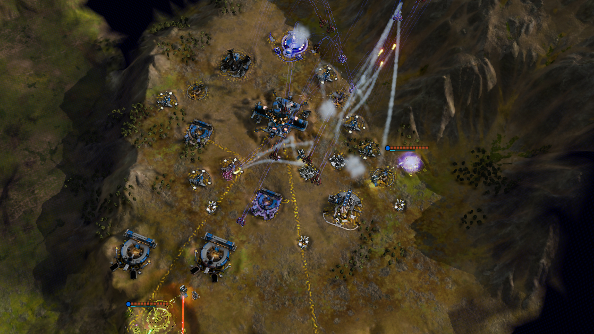 That’s less of a problem when you’re charging in with a bunch of monstrous dreadnaughts. Ashes’ range of deadly behemoths have been given a new layer and can now be upgraded after gaining enough experience. They’re becoming a lot like hero units. Sometimes levelling up just gives them the option to full repair, but other buffs appear as well, dependent on the dreadnaught in question. It doesn’t take too long for them to gain new ranks, either.

Ultimately, I’m busier, and more content. It’s not the annoying, micromanagement busy work that distracts from the fun of smashing two huge armies up against each other, but rather it’s just more for me to do while that’s happening, making the fights simply more interesting. They’re a bit more compelling from an aesthetic standpoint, too. Some new maps have been thrown into the mix, so no longer must we fight on endless green hills. There are snow and arid maps now, and while the textures don’t really make a difference – unlike the terrain – the variety keeps matches from being too monotonous.

In early alpha, Ashes felt a bit like a big tech demo, but now it’s really starting to feel like a proper RTS. There are still a lot of unknowns, of course, most notably the campaign that we know little about, but with the newly added ranked play and matchmaking, there are at least plenty of ways to get into a future-scrap on some far flung alien world.