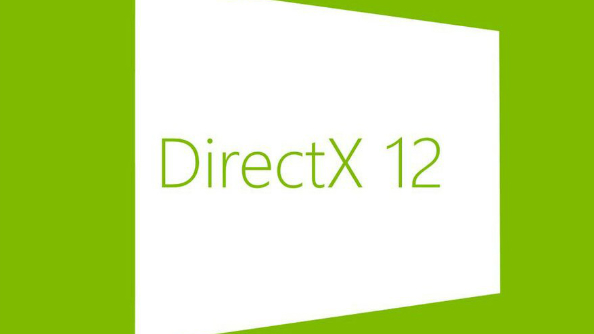 DirectX 12 is very much a performance-focussed API. Look at a screenshot of the same game running in, for argument’s sake, DX9 and DX10 and you’ll see visible differences. Microsoft’s latest update, on the other hand, places a much greater focus on what goes on under the bonnet. Explicit Multi-Adapter (EMA) is one such under-the-hood tweak, allowing two cards of different generations and even manufacturers to work together, harnessing at least the majority of each’s performance.

Only with Ashes of the Singularity’s latest update though has it been possible to see what EMA can do. Oxide’s impressive RTS game is a pioneer of many DX12 techniques that other developers have yet to implement (or at least release to the public), and beta 2 of the title added EMA support to that list.

Looking for something that’ll nourish your ears, rather than your eyes? Head on over to our best PC gaming headset guide.

A number of sites including AnandTech, Maximum PC, and PC World, have benchmarked a huge variety of card pairings in Ashes of the Singularity beta 2, and that sizeable chunk of data gives a good early insight into whether EMA works (yep), if AMD and NVIDIA cards can be paired (yep), and how well cards from different API generations and manufacturers combine in performance terms (too complex to be summed up in a pithy aside).

Before we get to the fps figures, it’s worth mentioning that Ashes might not currently be optimised to get the maximum performance from an EMA setup. The reason DirextX 12 is designed to support these mix-‘n’-match card pairings is so they can be used for Split Frame Rendering and Alternate Frame Rendering, two techniques that divide the rendering job between cards in different ways. 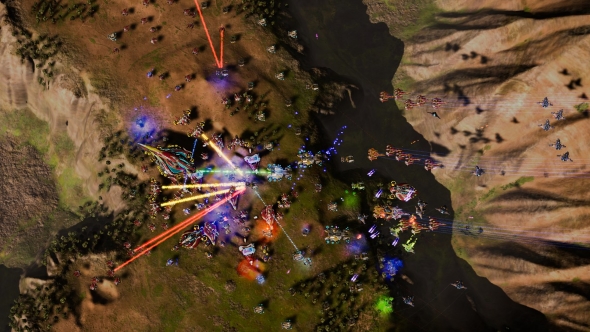 In SFR, an individual frame is divided into separate tiles that multiple GPUs can render asynchronously before the driver tidies it up into a synced image and sends it to the display. In AFR, multiple GPUs render alternate frames. SFR has the bigger performance gain potential, in theory, but currently Ashes only supports AFR. That means we may see bigger improvements from card pairings in future DX12 titles.

So, the performance data. Firstly, paired cards using EMA do produce a performance boost over a single card. That’s true of DX11 and DX12 cards, and models from both NVIDIA and AMD working together. Quite why and how the hierarchy is assembled though is at this point very unclear. In the words of Maximum PC: “Frankly, we’re not quite sure what to make of the overall standings. They’re crazy.” 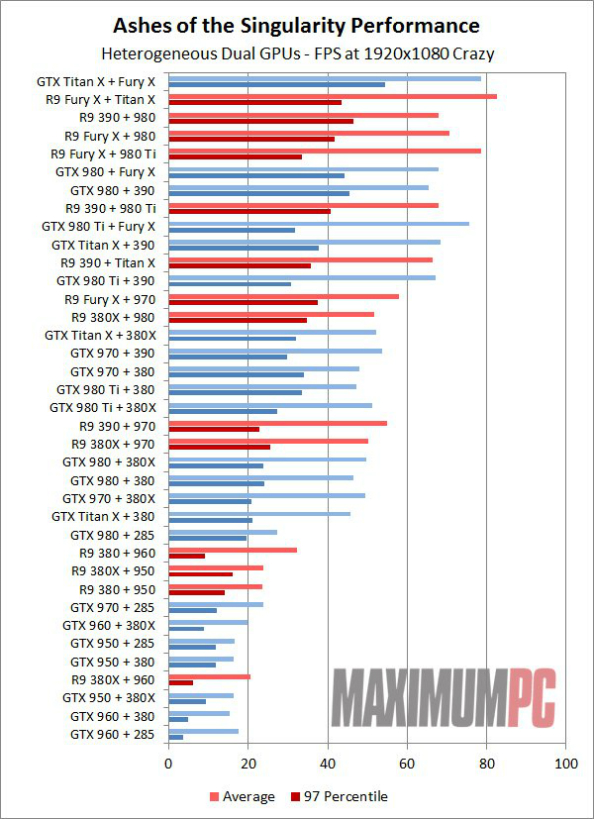 Speaking very broadly, the most obvious trend here is that higher end cards working in tandem produce greater average and 97th percentile fps figures than less powerful cards. You know, like every graphics card benchmark chart you’ve seen in your life. Beyond that, it’s the wild west. AMD cards appear to have the advantage over NVIDIA using EMA and AFR, but that said there’s a lot of fluctuation in averages and performances depending on which card is set as the primary.

For those currently running SLI or CrossFire setups in their machines, it’s worth noting that EMA produced higher fps performance than both across various sites’ benchmarks. According to PC World‘s figures, there’s a 12% increase when using two GTX 980s together with EMA rather than SLI. 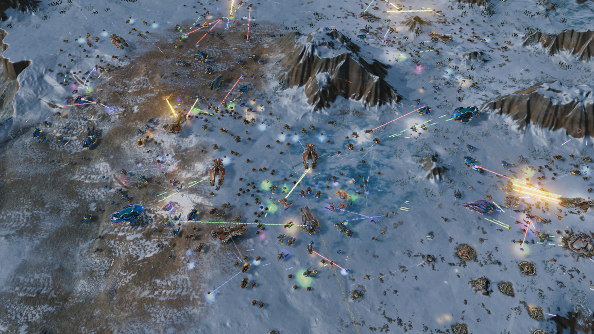 And now, to bury all that data beneath a bunch of caveats. Realistically, it’s too early to draw any meaningful conclusions about the long-term impact of DirectX 12 for multi-GPU setups, because this data comes from just one game. Other developers will have different approaches to DirectX 12 – some will inevitably implement Split Frame Rendering rather than AFR, and thus may yield higher performances from card pairings using EMA.

It may also be that few DX12 games actually support EMA, so it’s a bit early to be hunting around for cheap AMD/NVIDIA card pairings that will make use of it. The big takeaway from Ashes of the Singularity’s initial support is that something once considered sci-fi, red and green teams working together in one machine, is now reality.