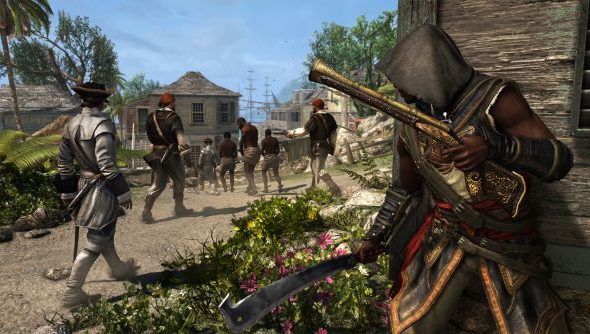 Between Ubisoft’s traditionally prolific promo department and a many-platformed release date spread over the best part of a month, Assassin’s Creed IV: Black Flag was ensured an entrance flanked by literally tens of trailers. The fact that its substantial Freedom Cry DLC has mustered just two might be taken as cause for worry – but in fact it seems more than capable of keeping itself afloat.

Already in development at Ubisoft Quebec some time before Black Flag’s release, Freedom Cry offers a new tub, a new tank of water to explore, and Kenway’s compelling Trinidadian sidekick Adewale as protagonist. It looks like this.

Freedom is hardly new thematic ground for Assassin’s Creed, but rarely has the subject of liberation been tackled so overtly (outside of the PS Vita’s, er, Liberation) as here.

Lead writer Jill Murray has promised friction between Adewale’s new duties as an assassin and the slaves’ cause on St. Domingue, the island that becomes Freedom Cry’s central setting. She added that the veteran pirate “does not make freeing other slaves the point of his existence”. But it doesn’t appear as if Adewale holds out for long before installing himself as a revolutionary figurehead:

At three or so hours long, Freedom Cry won’t extend Black Flag’s extremely lengthy adventure much further. But I’ve enjoyed Adewale’s company and laissez-faire attitude through the main campaign so far. How about you?