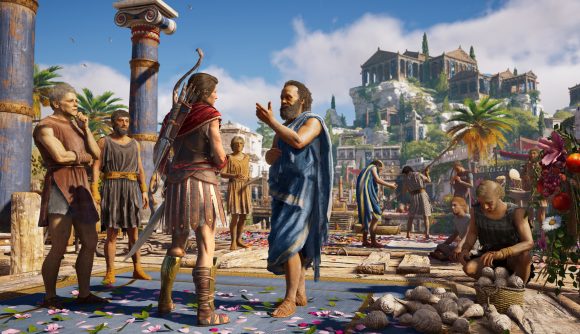 Assassin’s Creed Odyssey won’t have the option for dialog exclusively in the Greek language. That shouldn’t be much of a surprise, given that you couldn’t play Origins in Egyptian, either, but for the handful of you holding out hope for the most historical immersion possible – well, there it is.

Director Scott Phillips was asked about Greek language support as part of Game Informer’s rapid-fire Q&A series, and his joking response suggests we shouldn’t hold out much hope for the feature. “You can play it in Italian and then assume that it’s Greek.” That is, I guess, something, but maybe not what you were hoping for.

Previous Assassin’s Creed titles have occasionally allowed you to play in the setting’s native language, though only when the needs of localization aligned with history. The Italy-based AC2 and Brotherhood were playable in Italian, and Unity was playable in French. And, of course, who could forget the daring release of AC3 and Syndicate in the full, native English of their American and British settings?

Jokes aside, the Assassin’s Creed Odyssey actors feature many of Greek descent, including those portraying the main characters, Alexios and Kassandra. Ubisoft says that’s part of an attempt to “deep dive” into the historical region’s culture, but sadly it seems those efforts won’t extend to full language support. If it follows Origins’ format, Odyssey will feature plenty of era-appropriate terminology interspersed in the localized dialog.

You can hear Phillips’ comments in the video below at 2:09. (He seems uncertain about whether any of the game’s characters will utter “it’s all us to us,” however.)

According to the game’s Steam page, Odyssey will feature spoken dialog localized for English, French, Italian, German, Spanish, Japanese, Portuguese, and Russian. The Assassin’s Creed Odyssey release date is set for October – follow that link for a deeper dive on everything we know.