Assassin’s Creed Odyssey release day is finally upon us. The next Templar-bashing romp is out today, so we have a guide to Odyssey’s story, settings, and gameplay. Here’s everything you need to know before you set off on your journey in Ancient Greece.

The 11th game in the core line of Ubisoft’s pseudo-history series of deadly Assassins and dastardly Templars is well on its way, and we already have an Assassin’s Creed Odyssey release date. This time we’re off to Greece to explore the exploits of the Assassin Order in the land of triremes and Spartan warriors. We’ll also be taking on the role of either a male or female protagonist with fresh abilities, weapons, and RPG-grade dialogue options. 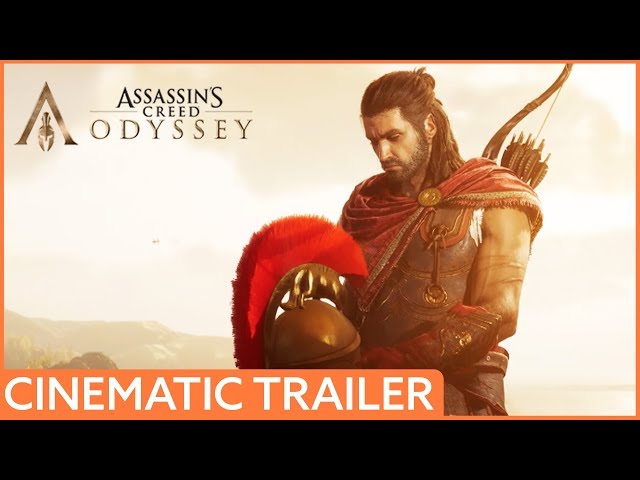 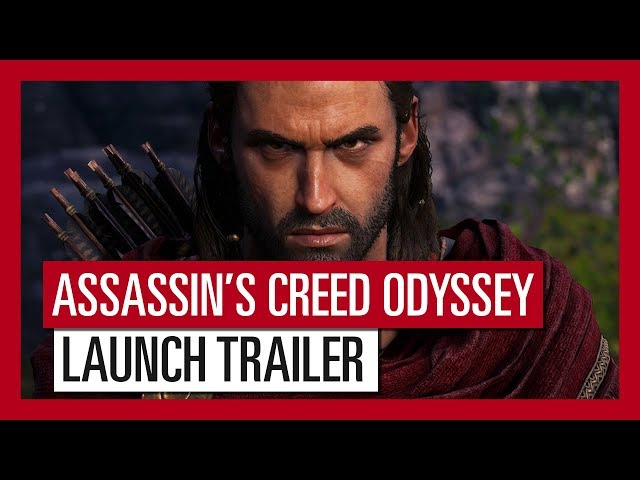 Since our odyssey is almost ready to begin, we have the lovely launch trailer above to sate our appetite. As if we didn’t know already, but Alexios and Kassandra are very cool, and will be ready to defy the gods and choose their own path.

Assassin’s Creed Odyssey is set in Ancient Greece, during the period of the Spartans – the oldest starting point in the series. The Peloponnesian War is the game’s historical backdrop, but the conflict is not just set dressing: Assassin’s Creed Odyssey’s war is simulated in the game, with you making the key decisions that impact Greece’s divided 27 states as they fall under the influence of Athens and Sparta.

For instance, when leaders get in a sticky situation due to a lack of resources, their weakness can be exploited by rival factions. To foil this, vulnerable leaders may enlist you to help, should you wish to ally with them. Or, if the meter indicating their grip on power goes low enough, you can seal their fate through looting and destruction. 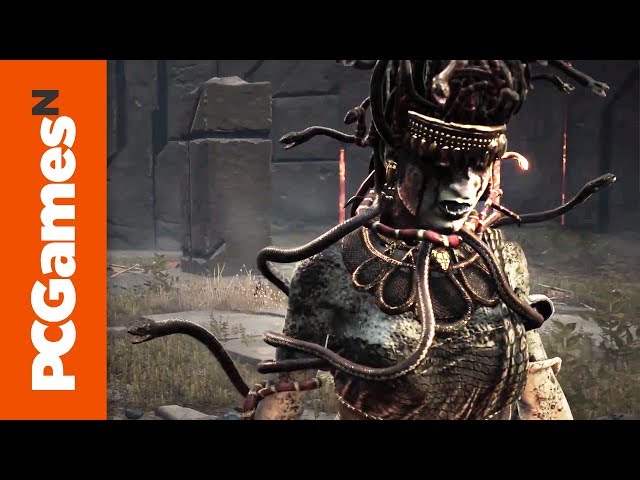 Much of the game’s plot will focus on the First Civilisation, which appears to be Odyssey’s answer to the long-standing Templar threat that’s plagued the Assassin’s in most of the games in the series. The First Civilisation left behind artefacts, including the Apple of Eden that has been so central to the Assassin’s Creed overall plot line, which contain immense power. At Gamescom 2018 we got to see how these artefacts can corrupt those who wield them and turn them into monsters. Yes, Assassin’s Creed Odyssey has monsters drawn from Greek mythology, including the snake-haired Medusa, who acts as one of the game’s optional endgame bosses. You’ll even be able to ride the majestic Pegasus, even if Greek mythology’s famous flying horse can’t fly.

By embracing the period’s myths and having the player wield the supernatural Spear of Leonidas, Assassin’s Creed Odyssey pushes the limits on the historical grounding of the series. But by playing around with more fantastical elements, the game can offer heroic abilities such as the Spartan kick that can send a soldier flying. However, if you prefer history to myth, an Assassin’s Creed Discovery Tour returns to the series, giving you the chance to learn about Ancient Greece without fear of enemy attack. 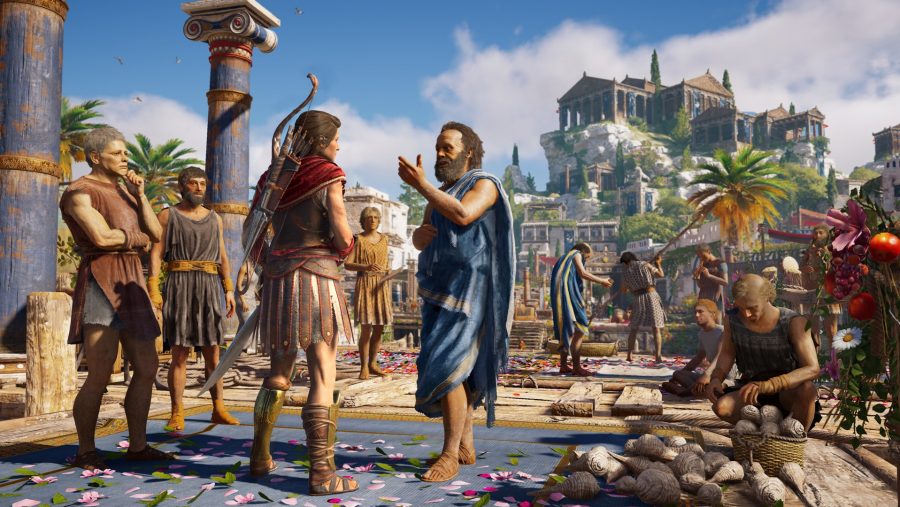 This time you get to choose between either a male or female Assassin’s Creed Odyssey player character – a choice that will be here to stay when it comes to future protagonists in the series – which will either Alexios or Kassandra. That doesn’t affect who you can get lovey-dovey with, either: with Assassin’s Creed Odyssey’s romance options, you can try on your sexy gift of the gab when you see a love heart symbol next the relevant dialogue choice – but be warned commitment fans, you’ll only get to enjoy “casual” flings. That’s right, in this Ancient Greek adventure, you get dialogue choices to better interrogate – or get wound up by – famous figures such as Socrates.

It is clear that the combat mechanics and new questing structure from Origins are returning, as is the loot and weapon systems. We also know that there will be multiple Assassin’s Creed Odyssey endings and around 30 hours of “interactive storytelling” according to creative director Jonathan Dumont. Don’t worry about it turning into a service game, though; Ubisoft has emphasised that Assassin’s Creed Odyssey is a core single-player game. 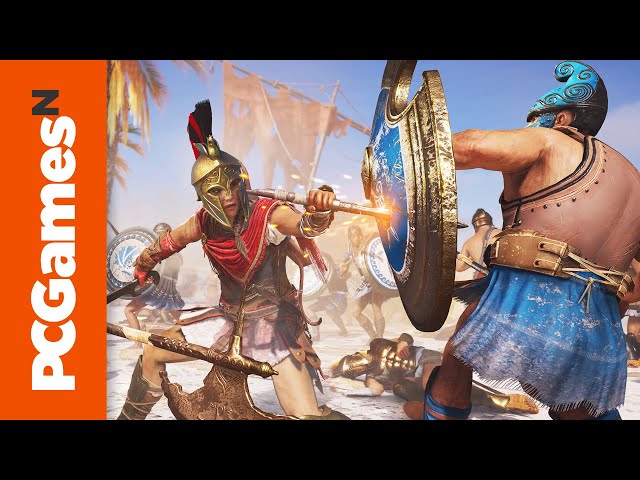 You were noticed as the spanner in the works of the Ancient Egyptian status quo in Origins as the elite soldiers known as Phylakes. Assassin’s Creed Odyssey’s wanted system goes a step further. As you inevitably start to rub people up the wrong way – by which we mean stabbing them – you will develop a wanted status, and you can track down and kill the NPC that’s been snitching on you. This system replaces the desynchronisation or forced reloads for raising hell that you had in previous games.

There is also a Mercenaries system, that sees special NPCs patrol the world in hunt of bounties. These are created from a pool of specific backgrounds, strengths, and weaknesses, which makes them sound a touch like Shadow of War’s Nemesis orcs. You’ll be able to hunt them down, defeat them, and loot their top-notch gear, making their presence much more impact on the world than Origins’ Phylakes.

That said, if you’re targeting the right people, you can initiate a kind of Assassin’s Creed recruitment to get them into joining your ship’s crew, and you have the freedom to be very persuasive. By that we mean you can knock out your enemies and smuggle them into your burgeoning fold – it’s like Metal Gear Solid V’s Fulton mechanic, without the balloons. Talking of MGS, it also looks like your ship will require base management akin to Mother Base, and that it can be upgraded over time. You’ll even be able to recruit Syndicate protagonist Evie Frye to your ship’s crew, so here’s how to unlock her. 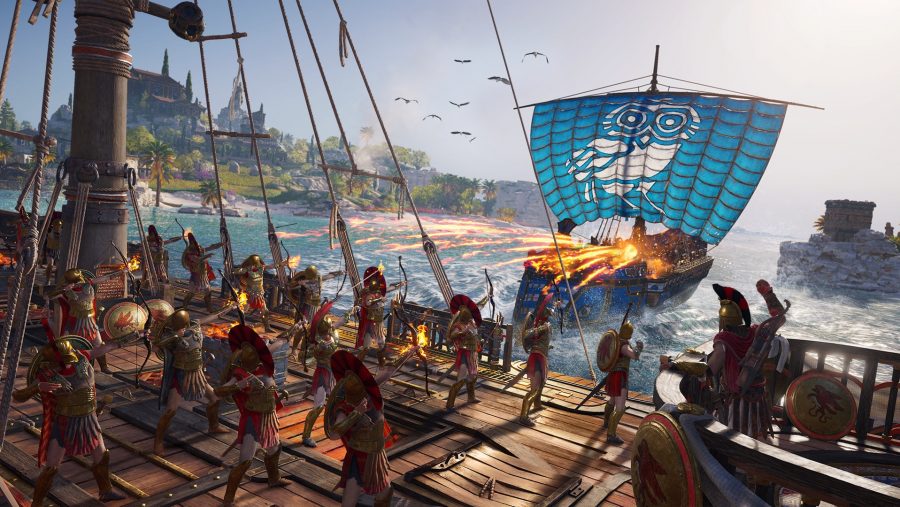 So it looks like, if you’re not careful, you’re going to be making yourself a lot of enemies. That means you’re going to need plenty of new Assassin’s Creed Odyssey abilities to ensure you still have the edge. For instance, the iconic Leap of Faith has been changed so that you can jump anywhere using the skill without dying. Before you would be fine if you landed on a hay bale or cart of sand, but now “falling does cause damage, but it is not fatal.”

Assassin’s Creed has even gotten on the battle royale bandwagon and has a mission that has you try and compete to be the last person standing in an 100-person melee that takes place on the island Melos.

Our Gamescom 2018 hands-on gave us a glimpse at late-game Assassin's Creed Odyssey content. We found that the storytelling is better than ever as we ran into a famous mythological monster.

You will also have access to a piece of Eden throughout the game, made manifest as the Assassin’s Creed Odyssey Spear of Leonidas. In previous games you only either heard of the special artefact or used it briefly, as the descendant of warrior king Leonidas, you get the spear at the beginning and can upgrade it.

Also, the Assassin’s Creed Odyssey armour system is brand new as it allows you to swap out individual pieces of protection. Origins was the first game in the series to feature levels and rarity scale for each piece of gear, but you only had an outfit as opposed to a helmet and wrist guards.

Speaking of naval matters, Odyssey’s ship gameplay is back, and one of our favourite aspects of Black Flag will be returning: Assassin’s Creed Odyssey’s sea shanties will once again keep you singing your heart out as you sail.

Oh, and one of the most crucial aspects to the game is that you can climb Zeus’ penis, because why not?

Assassin’s Creed games have form when it comes to pushing the graphical envelope, and Odyssey is no different. In fact, the Assassin’s Creed Odyssey system requirements are pretty demanding even if you’re satisfied with 30fps and 1080p. Here’s the rig you’ll need to packing:

Can you run it? Check your PC against the Assassin’s Creed Odyssey system requirements 2021 on PCGameBenchmark.