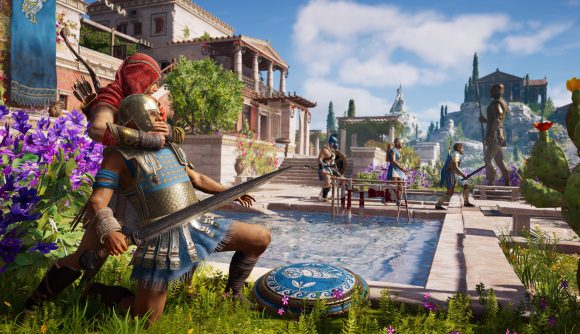 It’s no secret that Assassin’s Creed Odyssey is drawing from the larger-than-life mythology of Ancient Greece: one of the first screenshots of the game features a terrifying reincarnation of the snake-haired Medusa. But Ubisoft has now said that some elements of the game will “push the limits” of the series’s traditionally strict(ish) adherence to historical fact.

Talking to us at Gamescom 2018, Odyssey’s creative director Scott Phillips says: “We wanted the Spear of Leonidas, we wanted you to have an artefact,” referring to the mythical, seemingly magical weapon that acts as the key piece of gear for your Spartan warrior.

“[The spear is] a way to give you access to these special abilities, which can push the limits for some people for how far Assassins Creed should go. But we wanted to tie it into the lore of the first civilisations and Apples of Eden, and so we sort of do both with the Spear of Leonidas. I think it works out really well.”

The abilities of the spear allow for a very different combat experience, one free of the shield that dominated Origins’ battle systems. “More than anything, we wanted the combat to be active and agile and focus on movement,” Phillips says. “We felt by having a shield some types of players would hide more than we wanted them to.” Thanks to the spear, this time players will be kicking enemies away, rather than deflecting their blows.

For those worried about the emphasis on special, almost superhuman abilities, and the presence of strange creatures, Phillips assures us that everything comes with context.

“When you look at a demo like what we have at Gamescom in isolation, I don’t think you’re doing the whole game justice,” he says, referring to an endgame segment in which players must battle Medusa. “This is a level 50 boss – not every player is going to get there. We think by making them enticing and pushing things a little bit in these secondary paths, it’ll make players want to stick around a little more.”

In the context of the demo, you don’t have the full understanding of it, you don’t know why you’re getting this Apple of Eden from Medusa. But within the full game you’ll understand how that’s connected to you, how that’s connected to the world, and why you’re doing it,” Phillips explains.” So it all gets contextualised. We don’t just throw it in, we spend time to make sure it’s grounded in the world and lore and we build up to it.”

Assassin’s Creed has always had its wild elements – let’s not forget battering the Pope in Assassin’s Creed 2 in order to steal a Biblical superweapon from him – but it’s only since Origins that Ubisoft has really begun to push the series’ boundaries away from ‘roughly grounded’ to ‘occasionally bonkers’. I’m into it, but it’s certainly not for everyone. Let’s hope Ubisoft strikes the balance right on the Assassin’s Creed Odyssey release date in early October.