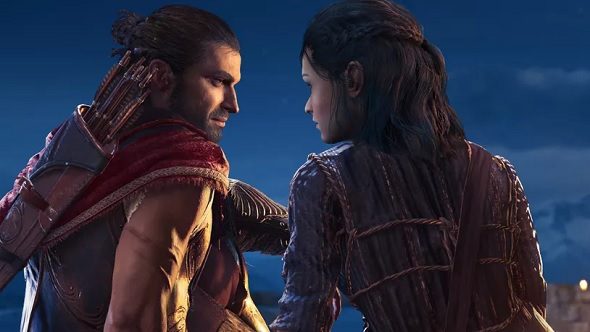 We know that Assassin’s Creed Odyssey will let you romance some of the characters you meet – but how will that work? Due to some early hands-on time that press have had with a demo of the game we’re able to tell you.

In the demo, you meet a soldier called Thaletas and a resistance leader called Kyra who are leading a Spartan army against the Athenians. You help them reduce the enemy numbers so they can get more control of a particular region of the map. But outside of that you’re able to talk to both of the Spartan leaders in a choice-based conversation.

In the mood to play one of the best sex games on PC?

You typically get between one or two choices during dialogue and, sometimes, you get an extra dialogue option that has a heart symbol next to it. When that pops up you know that choosing that option will lead to you trying to romance that character. You may have to choose a dialogue option with a heart symbol next to it more than once to fully romance them.

According toPC Gamer, in the demo, you can pickup some wine while exploring the world of Assassin’s Creed Odyssey and get the chance to gift it to Kyra while talking to her at some point.

The game’s creative director Jonathan Dumont further detailed how romances work to PC Gamer, saying that they are casual, rather than full-fledged commitments.

“You go from an island or a new place in the world, and you’ll romance a character there, but it’s not like ‘I found the love of my world and I’m keeping that character’,” Dumont says. “It’s much more casual, a spur-of-the-moment type of romance.”

You probably shouldn’t expect to be able to marry anyone in Assassin’s Creed Odyssey, then. Nor should you prepare yourself for the kind of full-frontal nudity that will feature in Cyberpunk 2077 either – but, hey, you never know.