What are the best sex games on PC? From steamy sexy times in The Witcher 3, space rumpy-pumpy in Mass Effect: Legendary Edition, to kinky bedroom antics in Fallout 4, these are the sexiest games on PC.

Sex. It’s all around us. It’s leaking out of the walls. It’s flooding up through the floorboards. “Where’s all this sex coming from?” screams your mother, as she puts the sofa up on cinder blocks to protect it from the rising tide of sex. “Get all of the white goods up the stairs!” So, what are the best sex games on PC?

“Get with it mum, you massive prude,” you shout in reply, opening the back door and allowing a great wave of filthy sex to wash over the living room, carrying your dad’s slippers away in a frothy deluge while the family dog barks and barks, confused and soaking. That’s sex for you. Or houses in low-lying flood plains. I can never remember which is which.

The best sex games are: 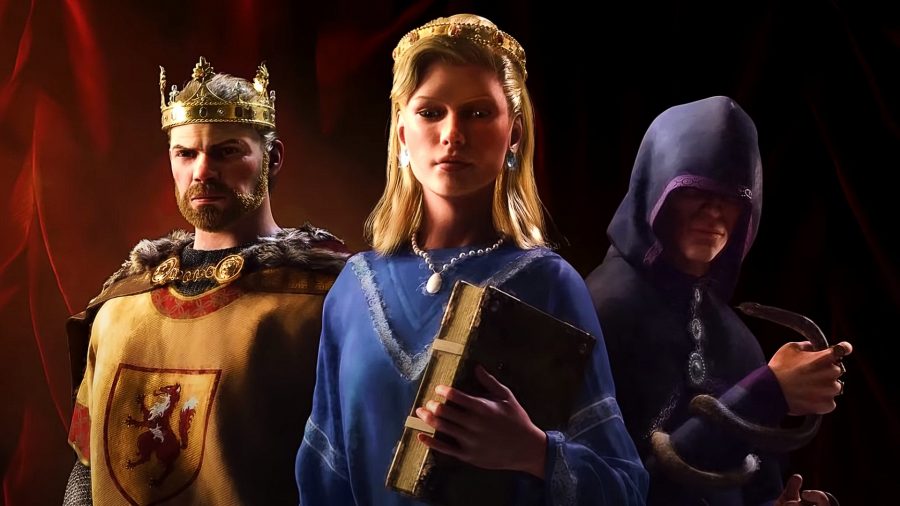 Crusader Kings 3 is all about existing in a world where you can lie, cheat, steal, kill, and bonk your way to the top. With this precarious way of life you’re bound to come across some enemies along the way who, understandably, want you dead after you slept with their spouse, so you better have an heir waiting in the wings for when you’re poisoned.

Everything in Crusader Kings 3 is always wrapped up in sex somehow. You can discover your wife humping a portrait of your grandfather, or even seduce the Pope if that’s your thing. Want someone to continue your legacy? Have sex! Want to become a monarch? Have sex! Want to be upset because you find out your spouse is cheating on you with your cousin? Um, accidentally see them have sex? Anyway, Crusader Kings 3 is a very honest look at what humans are like when left alone to be the worst versions of themselves, and our CK3 review can tell you how fun that is. If you’re interested in any of these sexual situations, here’s our beginner’s Crusader Kings 3 guide.

South Park: The Stick of Truth

When it comes to sex games, South Park: The Stick of Truth is as unconventional as they get. That is thanks to a scene that plays out like Honey, I Shrunk the Kids, only with much more scrotum dodging.

After being shrunken down to the size of a gerbil, you emerge from a vent into your parents’ room. They start going at it on their bed while you fight off a band of underwear-stealing gnomes on the opposite dresser – because South Park. The fight does not end there, as soon you find yourself locked in conflict with an Underpants Warlock on the bed, dodging limbs and swinging appendages with graphic quick time events. Kind of like in your nightmares. 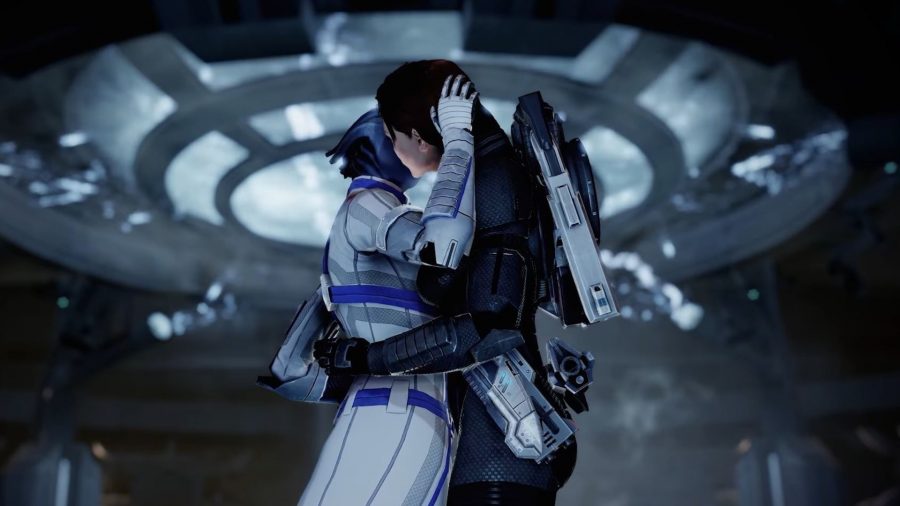 The Mass Effect series is the only reason you’re ever likely to use the word ‘romanceable’ – at least until it inevitably becomes the name of a problematic dating app made in Silicon Valley.

Over the past decade, BioWare’s other RPGs have also become synonymous with sex. Relentless, unfettered, and delightfully progressive sex; games like Dragon Age: Inquisition also let you bonk just about anyone. Those randy reprobates at BioWare need to be doused in several gallons of the iciest water available.

If you have a particular favourite Mass Effect party member and want to court them, be sure to check out our Mass Effect Legendary Edition romance guide for all the best pickup lines. Just remember to keep a backup save whenever you decide to sleep with one of the NPCs in Mass Effect 2 – we hear one’s a bit on the ‘rough’ side.

Bethesda is understated in its depiction of the deed, if only for fear of having to animate all the wobbly bits without somebody’s crucial parts sticking in the terrain and elongating to span the gap between Sanctuary and the Glowing Sea (incidentally the same technique employed by the medical practitioners who send enthusiastic emails to young men of low self-esteem).

Read more: Check out our list of the best RPGs on PC

True to life, sex in Fallout 4 is contingent upon a series of regular and increasingly challenging charisma tests. Once you familiarise yourself with the many Fallout 4 bugs, crashes and fixes that can interrupt your virtual coitus, and should you pass through the necessary checks and balances that prevent sex from happening to insufficiently persuasive 200-year-old widowers, you will be treated to a fade to black and a night on one of the stained mattresses favoured by the denizens of the game’s Commonwealth.

The experience can be altered substantially if you know the right Fallout 4 mods. And if you’re not interested in digital intercourse, there are still plenty of Alsatian antics you can indulge in, as you’ll find out in our Fallout 4 PC review.

The Witcher games are crawling with every different kind of fantasy wizard sex imaginable, to the extent that the game and its cast of dozens of sexable NPCs has been criticised by some as brazenly sexist. It is perhaps only because The Witcher 3 and its convoluted quests are so patently ridiculous in this depiction of an unending parade of women latching on to Geralt’s balls that it can get away with these sorts of boning-upon-quest-completion transactions.

Whichever way you slice this cake, however, it is layers of sex sponge with sex filling in between, no doubt about it. The Witcher 3 was the best game of 2015 and has sex all up in it, no matter how you might feel about that. Seek out our The Witcher 3 PC review to find out why the action-RPG classic has a lot more going for it than between-the-sheets deviancy.

Robert Yang is the master of offbeat sex games packed with humour and ridiculous, shiny 3D character models. The Tearoom is ostensibly about having sex with lots of men in public bathrooms, but there’s a story behind this, which is why Yang refers to The Tearoom as a ‘historical public bathroom simulator’. Back in the ‘60s, hidden surveillance was often used to secretly film men having sex with other men in a public bathroom and imprison them under sodomy laws. In The Tearoom, you’re tasked with getting with and getting off as many dudes as possible without getting caught by the police. Oh, and all the penises are gun barrels.

Why? Well, Lots of Yang’s games are banned on Twitch because of their sexual content, so in order to ensure the same doesn’t happen to The Tearoom, Yang has replaced all of the penises with objects that are never censored: guns.

What sort of shambles of a list of sex games would this be without mentioning the stomach-turning sex scene in Farenheit: Indigo Prophecy, in which a woman does full sex with a man who is technically an animated corpse at the end of the world, pausing only to remark that he is “freezing”?

Network N earns affiliate commission from qualifying sales.That is no sort of sex games list I want any part of, let me tell you. Bonus points are awarded here for the sex act taking place in a pile of filthy old, wee-smelling cardboard boxes in some sort of hole in the ground where disgusting people live.

What do you do after waking up in an unfamiliar room with a foggy head and a naked stranger sleeping beside you? One Night Stand is an indie sex game that explores the awkward aftermath of a drunken night of passion. You’ll have to search the unfamiliar bedroom for clues, talk to the stranger, and ultimately decide how you want the encounter to end. There are twelve ways for this game to end depending on your actions, but the real draw of One Night Stand is that its human interactions feel organic and realistic.

Much like NSFWare, Genital Jousting is a sex game that’s best played with friends at a party. You control a squidgy, squirming, slippery phallus, and across all of its various modes the main aim of the game is to steer your colourful penis into as many of your rivals as possible. Genital Jousting even has a surprisingly affecting – and very surreal – single player story where you try and get John the penis a date for his high school reunion.

There are two bits of sex in Wolfenstein: The New Order. The first and most notable happens on a train journey, shortly after a terrifying encounter with maniacal labour camp commandant Frau Engel. After passing a racial purity test and proving yourself worthy of the master race, there’s a brief bit of walking around holding a tray of realistically sloshing coffee. And then, just like that, there is a sex.

Our hero, even in the throes of physical ecstasy, cannot help but be introspective. “Sometimes Christmas, sometimes birthdays, sometimes mayhem, suffering and death,” monologues BJ. “Sometimes you just need to feel something good.”

All of which must have been distracting to his friend and resistance leader Anya, who is busily going to town on him. Anyhoo, read up on why Wolfenstein: The New Order is one of 2014’s best games.

Coming Out On Top

An interactive graphic novel about a college student coming to terms with his sexuality in the only way he knows how: by slinging it around like it is going out of fashion. In Coming Out On Top, you can focus your attentions on one of five men (or a fish) in this gay dating simulator, unlocking a catalogue of still-frame, sequence shots of really quite remarkably hot sex.

Unburdened of the usual game mechanics of jumping on heads, collecting crystals, and blasting orbs of pure energy from your eyes, sex in Coming Out On Top can instead freely explore the myriad ways in which it’s possible to be carnally satisfied.

So, there you have it, the best sex games on PC. Once you’ve dipped your privates in an ice bucket for an hour or two, make sure you check out the best upcoming PC games. And if you really must indulge filthy thoughts, fantasise about what sort of lurid sex acts Geralt will get up to in The Witcher 4. For the time being, though, you should calm down, think unsexy thoughts (oooh, steamed celery!), and try to redirect all that blood towards your head. Now, let’s never speak of sex again.