Ubisoft is currently undergoing a phase of complete reinvention with its library of games. Back in 2015, the company turned Rainbow Six from a squad-based tactical campaign into a fiercely competitive PvP masterpiece. Just over a year later, Ghost Recon morphed from strategic FPS into a chaotic open-world sandbox. In the near future, we’ll see Beyond Good and Evil evolve from adventure game to… whatever Beyond Good and Evil 2 ends up being.

But 2018 is the year of Assassin’s Creed, and Odyssey marks the final stage in its evolution from historical stealth to BioWare-style RPG.

Eagle dive into huge new lands with our guide to the best sandbox games on PC.

Like a Pokemon, Assassin’s Creed is undergoing a two-stage metamorphosis. If the first nine games were a Caterpie, then Origins was a Metapod, and Odyssey is a Butterfree. That’s not to say the first nine games were lacking in change – they gained experience, learned new moves, and became better games with each entry – but even when it came to Black Flag, the original set of Assassin’s Creed games stuck to a very similar formula.

Origins marked a distinct change in the series, overhauling basic features like weapons and progression, which fundamentally altered the way the game was played. But Odyssey goes even further, spreading its astonishingly pretty wings and embracing all that is RPG: a sprawling sense of scale, fantastical abilities, dialogue trees, and even romance.

The Assassin’s Creed series has always been pretty strong when it comes to personalities; Ubisoft’s writers have consistently had fun with bringing historical figures to life with larger-than-life characteristics, and leading protagonists have been bright and memorable. But Odyssey adds far more excitement to the hero that you embody. Not only does it introduce multiple characters to choose from at the start of the game, it allows you to mould your Spartan warrior in a way that speaks to you as a player.

While your hero has a set name, appearance, and backstory, the ability to choose what they say in conversation allows you to dictate their nature. Your Kassandra may be a stoic, no-mess badass, while mine may be a sassy flirt intent on wooing every girl in Greece. This may not be a new idea – it’s the basis for Mass Effect’s and The Witcher’s lead characters – but it’s a huge change for Assassin’s Creed, which has never offered any agency or choice of this kind in its historical sandboxes before.

Talking of BioWare and CD Projekt Red’s games, Ubisoft has borrowed the concept of playable paramours for Assassin’s Creed Odyssey’s romance options. Ezio may have been a bit of a ladies man, but Assassin’s Creed has never really dabbled in the idea of roleplaying your way through romantic or lustful encounters before. That’s very much been the homeground of RPGs like The Witcher, and Ubisoft’s decision to include it in Odyssey is a clear message that the developer is dedicated to changing what the series is.

Conversation choices and romances that have impact are just the start as even long-established mechanics are being overhauled to make Odyssey a very different kind of Assassin’s Creed game. All previous titles have made typical use of quest markers: just follow the dot on your minimap to find your goal. Origins removed the minimap to encourage you to observe your surroundings more, but Odyssey almost entirely eliminates quest markers. Instead, many quests will offer clues as to the location of your goal.

The Trouble in Paradise quest shown at E3 2018, for example, asks you to find two rebel hideouts, of which one is “in a cave under the city” and the other “is northeast of the Artemis Hills.” Using clues instead of quest markers makes you feel far more immersed in the world, actively using locations and landmarks to explore, rather than passively following a direction on a compass. This goes a long way to making the experience feel like true roleplaying as opposed to playing a videogame. 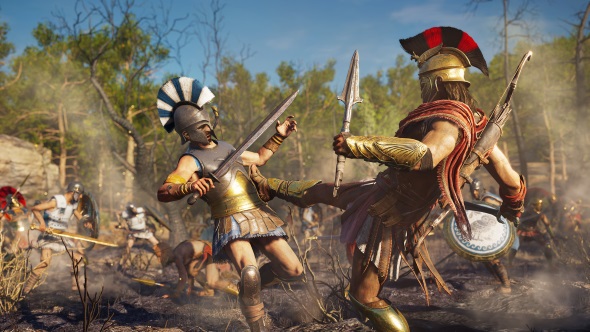 There are further elements I could point to: Assassin’s Creed Odyssey’s abilities are far more numerous than its predecessors, featuring full-fat RPG active skills that allow you to heal, put out significant damage, and even tame wolves. You have a base to build up and improve in the form of your ship, and you can even recruit new soldiers to serve with you. Your inventory is now even more granular, with each individual part of your armour able to be customised and replaced.

But beyond wholeheartedly embracing the RPG genre, Ubisoft has done something else with Assassin’s Creed Odyssey that redefines what the series can be: it’s abandoned the creed itself. While we can’t say for certain yet, it appears that Odyssey has nothing to do with the Assassin’s Brotherhood. This is, afterall, set many hundreds of years before Origins, which is the earliest point in the order’s timeline. The absence of the Brotherhood can also be seen in Odyssey’s logo, which uses a Corinthian helmet and the classic Spartan lambda triangle design, rather than the eagle skull outline that every prior game has used. This strongly suggests that Ubisoft no longer considers the assassins themselves to be vital; Assassin’s Creed is now a historical series that can be anything it chooses to.

Ubisoft impressed me with Assassin’s Creed Origins and its determination to prove that the series could be more than hooded folk getting stuck in insta-fail tailing missions. But the hour of Odyssey I’ve played so far has won me over to a greater extent than Origins ever did in 70 hours. It’s sort of a shame – Origins is potentially about to be overshadowed on Assassin’s Creed Odyssey’s release date and it’s barely a year old – but that’s nothing to cry about when its successor works as the perfect personification of Ubisoft’s current dedication to exciting reinvention.