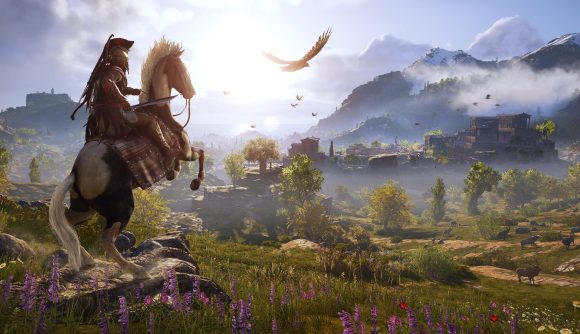 It’s safe to say that every big publisher is attempting to find its own long-term success in the games-as-a-service sector, and Ubisoft is no different. But if you’re worried about service systems taking over its single-player offerings, don’t worry: you can, at the very least, feel safe in the knowledge that Assassin’s Creed Odyssey won’t be mutated into a hobby game.

Talking to us at Gamescom 2018, Odyssey’s creative director Scott Philips says: “We’re a big, core single-player experience. We want to keep the game alive and we want people to keep coming back to it, so we’ve planned quite a lot to keep people engaged once we’ve launched. But games as a hobby is more like Rainbow Six Siege, where you’ll play that every week with your friends. Odyssey is more like you’ll play a big bunch of it, and then we’ll keep it alive for a longer period of time as we add new things.”

Phillips emphasises that, despite huge service-game powerhouses like Rainbow Six Siege dominating people’s time and the gaming scene as a whole, there’s still a big market for people who crave more traditional games. “I think there’s still a big audience for that.” he says. “I know for me, personally, that’s the kind of thing I want to play, so I’m happy to have made that kind of thing.”

As for what the content that “keeps the game alive” will be, Phillips is keeping quiet, but it seems safe to assume it’ll bare some resemblance to Assassin’s Creed Origin’s content updates, which took the form of a multitude of paid-for DLC mission packs, and the mythological boss battles against Egyptian gods in the desert. With Ancient Greek myths being such a rich source material, we can only hope that Ubisoft stretches its creative muscles in a Herculean direction…

For all the details on Ubisoft’s adventure in Ancient Greece, check out our Assassin’s Creed Odyssey release date feature, which delves far deeper than just the game’s October launch date.