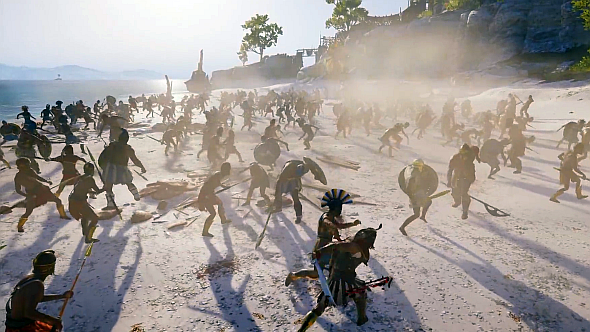 Assassin’s Creed Odyssey isn’t just set in the Peloponnesian War – it simulates it. Greece is divided into 27 states, each with its own leader, each falling under the influence of Athens or Sparta, and each potentially vulnerable to exploitation – by you.

Speaking with Kotaku, creative director Jonathan Dumont says “when those leaders get in trouble and their resources go down, they become weak, and other factions will invade their state.”

Leaders who find themselves in such a precarious condition will offer contracts for help, and that’s where we come in. Since the game is set four hundred years before the assassins’ order is founded, the protagonist is a mercenary – we’re not bound to any restrictive creed and are free to do as we wish. We can accept these contracts to bolster a regional leader, but we may also be charged with taking them down. In such cases we’ll be shown a meter illustrating their grip on the state, which looting and destroying things will diminish.

For more meshing game mechanics and the gameplay that emerges thence, check out the best sandbox games on PC.

Kotaku says you may even find yourself targeted by rival mercenaries – both on land and on the water – for certain actions, such as killing civilians. Map icons suggest you’ll be able to interact with those who’ve hired said mercenaries, so perhaps you canpersuadethem to change their minds about taking you out.

Over the course of an intense E3, we’ve suddenly gone from not knowing much about your Greek adventure to knowing almost everything. For all the details, such as the Assassin’s Creed Odyssey release date(October 5), trailers, screens, and gameplay changes, hit that link.