A new, free update for Assassin’s Creed Origins enables the Animus Control Panel, letting you tweak a whole bunch of in-game parameters. Think of it as an official Cheat Engine, letting you change movement speed and damage values to tweak the difficulty to your liking. (But let’s be honest, we’re all going to go god mode for a proper murder tour of ancient Egypt.)

The control panel is a PC-exclusive feature enabled through the Uplay overlay. Among the more fun bits are the option to increase the number of animals Bayek can tame, perfect for building the hippo army you’ve always dreamed of, or changing your character model altogether. You can also turn on instant assassinations, if you’re nostalgic for the old days of Assassin’s Creed.

If you want a much more in-depth look at the feature, Ubisoft ran a lengthy livestream breaking down the panel on Twitch. Or you can just launch the game and see for yourself. It’s free, after all.

Original story, April 3:Assassin’s Creed Origins has been a terrific revival for a series seeing diminishing returns, andcontinued support from Ubisoftmeans there’s been plenty of reason to keep revisiting ancient Egypt. But an upcoming PC-exclusive feature is one of the most interesting yet, letting you change everything from movement speed to damage values.

The Animus Control Panel will allow to adjust 75 parameters across 11 different categories. Ubisoft haven’t gone into great detail on what will be supported, but by squinting at their tiny screenshot it appears you’ll be able to change your character model, speed, active abilities, NPC hitboxes, detection ability, and plenty more. You can also bring around extra tamed animals, which should make for some delightful times. 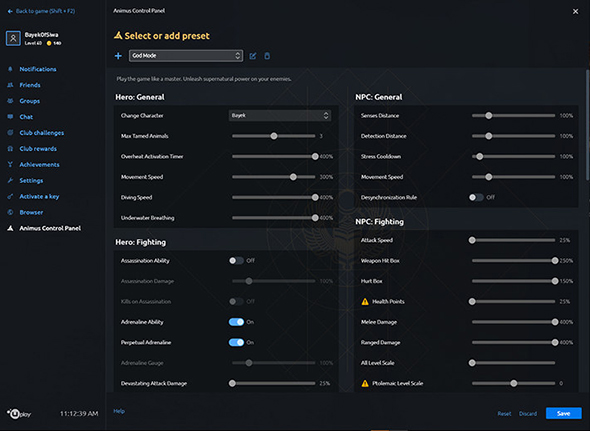 There’ll be three pre-created presets – God Mode is shown in the screenshot – and player-made presets can be shared on an official forum. The panel is part of the Uplay interface – so PC only – and is set to go live later this month. Ubisoft will have more info sometime before then.

The death of cheat codes has been a long-lamented fact of modern gaming, so it’s good to see Ubisoft adding some official ways to change parameters here, especially when it may upset the balance of the game’s existing microtransactions. Ubisoft have been talking about better support for PC, and this kind of customizability is a terrific way to get there.